What does it feel like to touch a cloud? You might already know how it feels to touch a cloud without realising it.

If you’ve ever been outside on a foggy day, you’ve essentially* been inside a cloud, just one very close to the ground instead of high in the sky. Fog and clouds are both made of tiny water droplets – like the ones you can sometimes see or feel in a hot, steamy shower.

Clouds form through evaporation* and condensation*. Water in lakes, rivers, oceans or puddles evaporates into water vapour* as the sun heats it up. You can evaporate water yourself by boiling it – watch it disappear as vapour.

Water vapour, which is invisible, naturally rises up from the Earth’s surface into the atmosphere as warm bubbles, like the bubbles you’d see rising in a lava lamp.

Clouds are made of millions of these tiny liquid water droplets. The droplets scatter the colours of the sunlight equally, which makes clouds appear white. Even though they can look like cushy puffballs, a cloud can’t support your weight or hold anything up but itself.

The process of evaporation and condensation in the atmosphere is similar to what happens in your bathroom when you take a hot shower: Warm water evaporates and then condenses back into water on the cold mirror. Warm water evaporates when you have a hot shower and then condenses back into water on the cold bathroom mirror or window.

Water vapour does not condense spontaneously*. It needs tiny particles or a surface – like your bathroom mirror – on which to form a drop. Atmospheric scientists like me call these tiny particles cloud condensation nuclei*, or CCN for short. These CCN are just dirt or dust particles that have been lifted by the wind and are floating around in the atmosphere.

Does that mean that places with a lot of dust and pollution, like cities, have more drops than clean places? Researchers have found more tiny droplets and more clouds in areas where there are a lot of these cloud condensation nuclei, while in areas without them fewer clouds are observed, like over the ocean or the Arctic.

The frozen droplets are now ice crystals. They continue to grow in size as water vapour turns into ice and sticks onto them. Scientists call this process of a gas turning into a solid “deposition.” It creates the beautiful branched ice crystals that you find in snowstorms. The beautiful branched ice crystals of a real snowflake.

Steady updrafts of air keep these very light water droplets or ice crystals floating in the cloud. So how do they turn into rain and snow and fall to the ground? Easy, they join forces.

Larger droplets collect smaller droplets on their way to the ground as raindrops. Snow grows in a similar way, with the crystals sticking to each other. Their little arms can interlock* to form a bigger snowflake. When water droplets merge with ice crystals, that makes hail.

Rain droplets grow on their way down to the ground, eventually becoming unstable and breaking up. 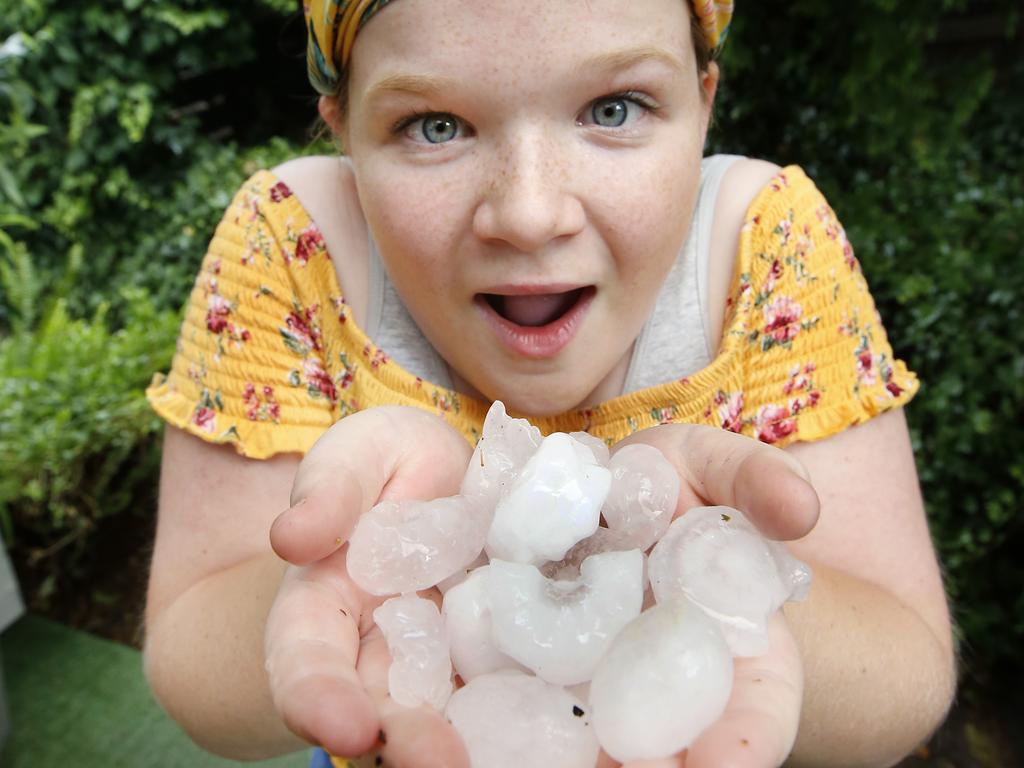 Ella 10, of Templestowe, collects freezing cold hailstones after her house was hit by a storm in January. Picture: David Caird

The largest raindrop that researchers have found was about 8mm across. Some giant snowflakes have been reported to be as big as 15cm across. And the biggest piece of hail? In 2010, someone found a hailstone 20.3cm in diameter in South Dakota, US and took a photo – so scientists know it was real.

That would be a lot more painful to collide with than a wispy cloud of water vapour.

Katja Friedrich is Associate Professor of Atmospheric and Oceanic Sciences, University of Colorado Boulder, US. This story was first published on theconversation.com

Why don’t you sink in the Dead Sea?

CLASSROOM ACTIVITIES
1. Write like a scientist
This article has been written with lots of explanations of tricky words and easy to understand examples and comparisons, so that it will be easy for ordinary people without a scientific background to understand. Now that you know all about clouds, fog, rain, hail and snow, see if you can rewrite the article as though you were a scientist writing for other scientists. Make sure you use all those clever technical words you have learnt!

2. Extension
Create a collage, diorama or other visual representation that shows the water cycle described in the article.

HAVE YOUR SAY: What more would you like to know about clouds?
No one-word answers. Use full sentences to explain your thinking. No comments will be published until approved by editors.