Townsville resident Michael Carperi carried Sunny to safety from his home in the suburb of Hermit Park. Picture: Evan Morgan

Hundreds of people were rescued from their homes in Townsville overnight as once-in-a-century floods have turned city streets into rivers.

Townsville and surrounding areas in Queensland had received more than a year’s worth of rain in the week to Friday, with more rain forecast to fall in coming days. 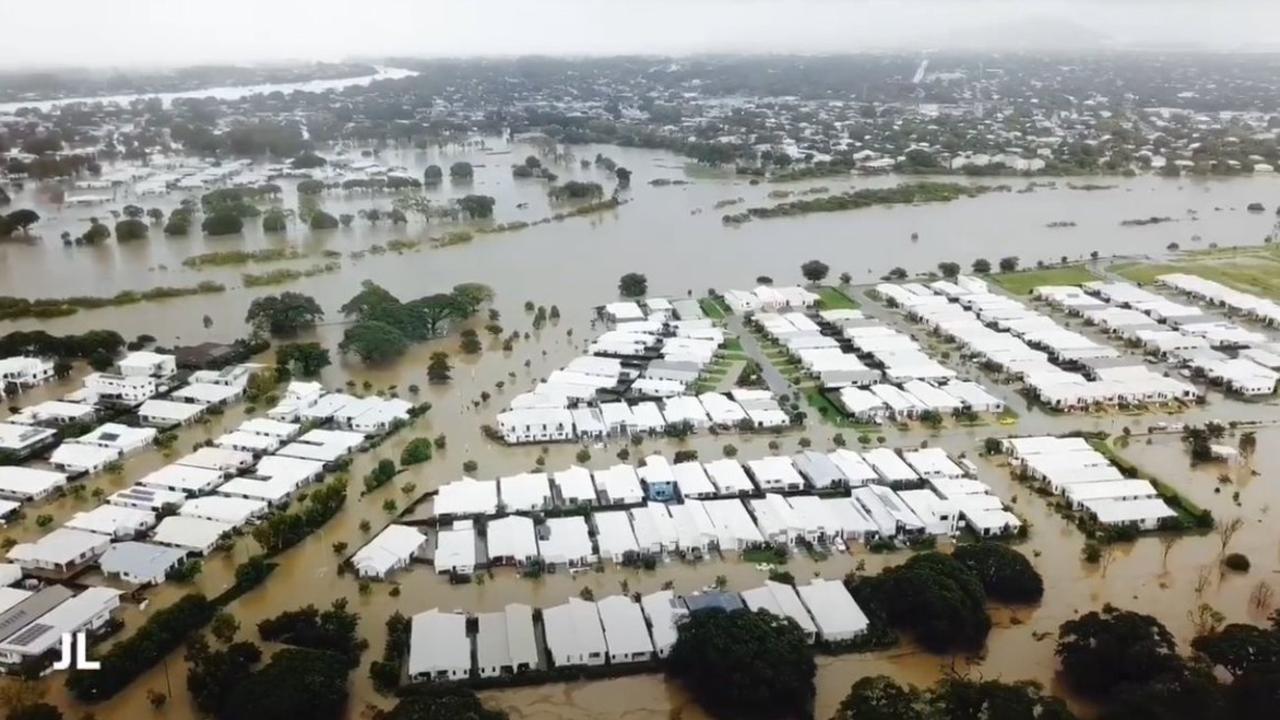 The heavy rain has overfilled the Ross River Dam, which controls the amount of water that flows down the Ross River through Townsville and to the sea. Gates in the dam wall were fully opened at 8pm on Sunday to let as much water through as possible, releasing 2000 cubic metres of water a second. (If you had a massive cube-shaped bucket with sides 2km long, one bucketful would be 2000 cubic metres.)

Australia’s tropical north usually experiences heavy rain at this time of year but recent falls are well above normal.

You can see in the graphic above the rain, in millimetres, that has fallen in the past week.

One of the worst-hit suburbs overnight was Idalia, where the water was waist deep. Houses built on the ground in low-lying areas have been flooded and houses built up on stilts (which is common in Queensland) are surrounded by water.

There is a big effort by the Army and emergency services underway to help people move to safety as their homes are flooded or surrounded by water.

Soldiers used 15 inflatable boats, which each holds a maximum of six people, to collect those trapped in their homes. 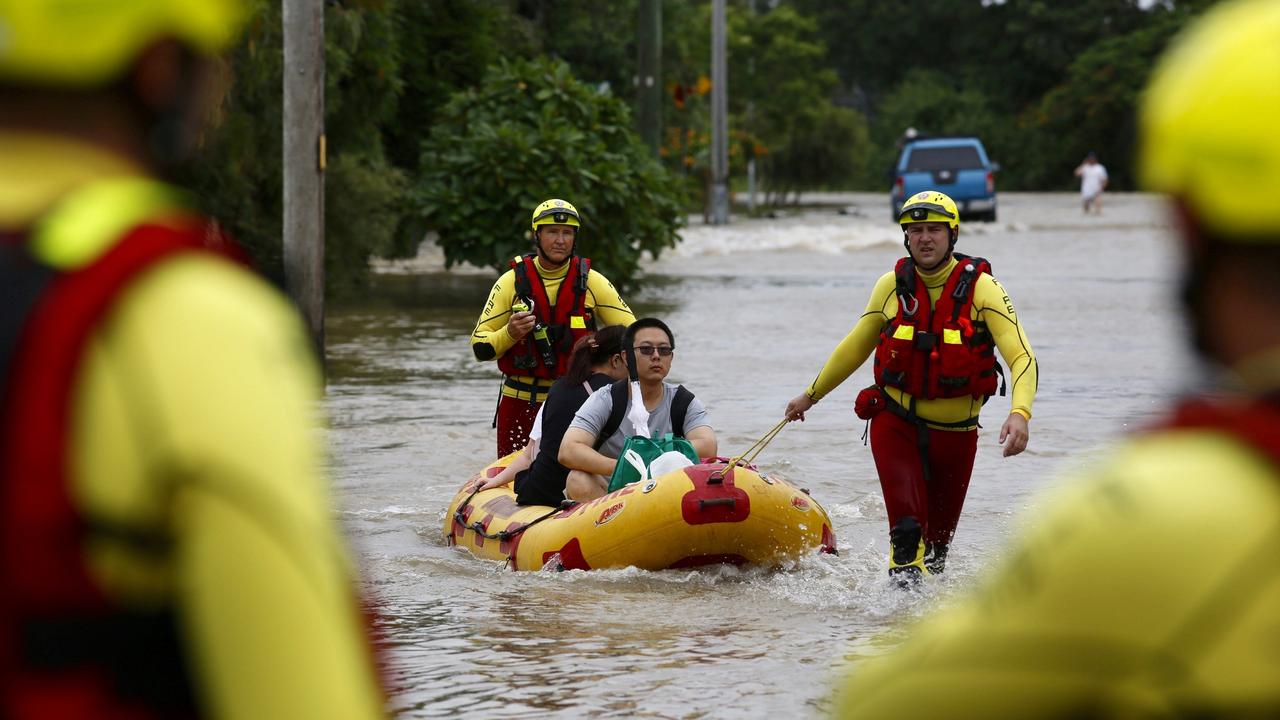 Other people were evacuated* in the back of rubbish trucks, which, because they are higher, can move through water more safely than lower vehicles.

More than 500 people and many pets had been relocated from Townsville and surrounds to evacuation centres by Monday morning. The Army does not know how many people still need to be evacuated. 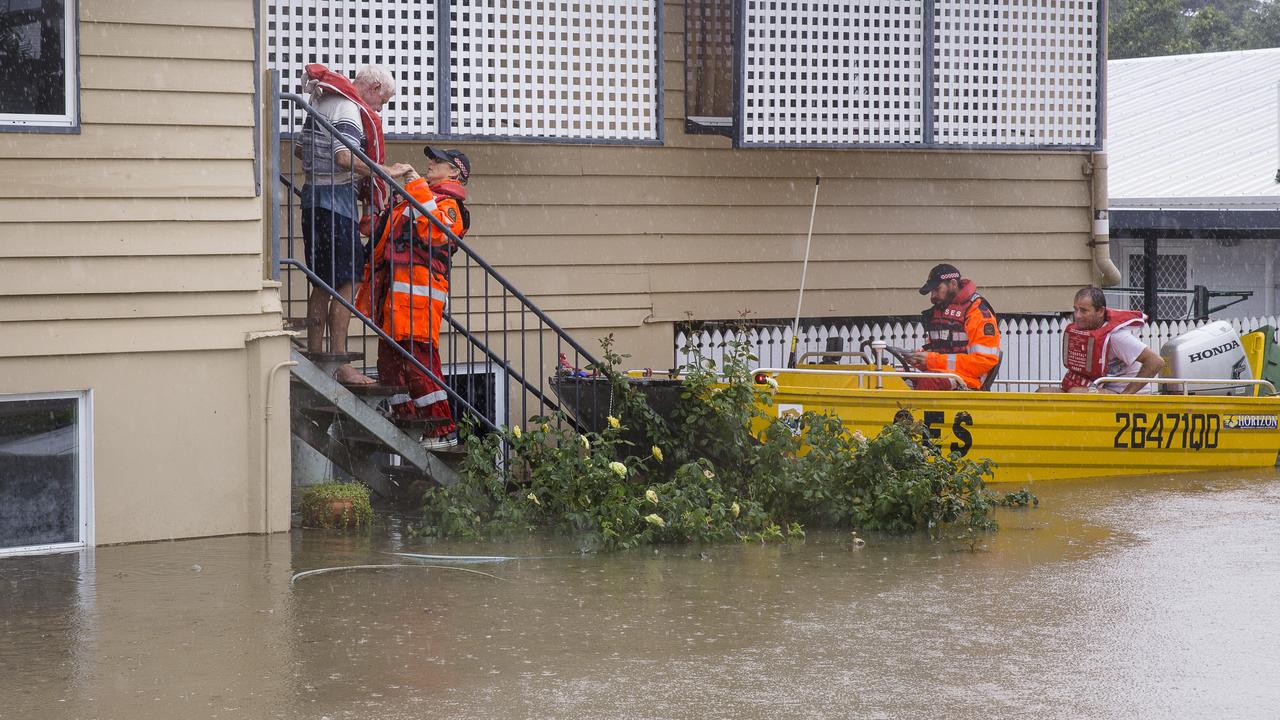 Two police and two ambulance officers caught in the flooding had to be plucked to safety — one officer having to climb a tree — after they were stranded overnight while themselves trying to help others. 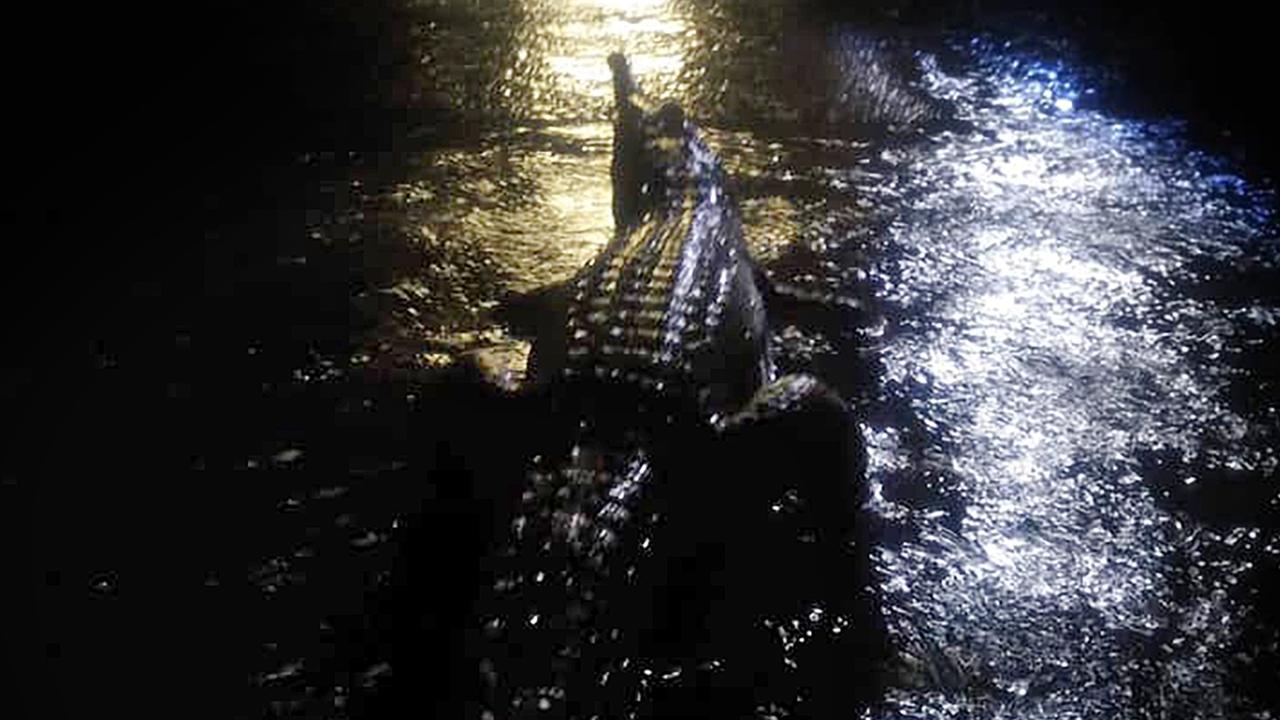 A crocodile in the driveway of a house in Townsville. Picture: AAP/Erin Hahn

“We still don’t know how much more rain will fall in the catchment*,’’ she said.

“It is quite dangerous.”

A QFES spokeswoman today said more than 160,000 sandbags* have been supplied to north Queensland so far. 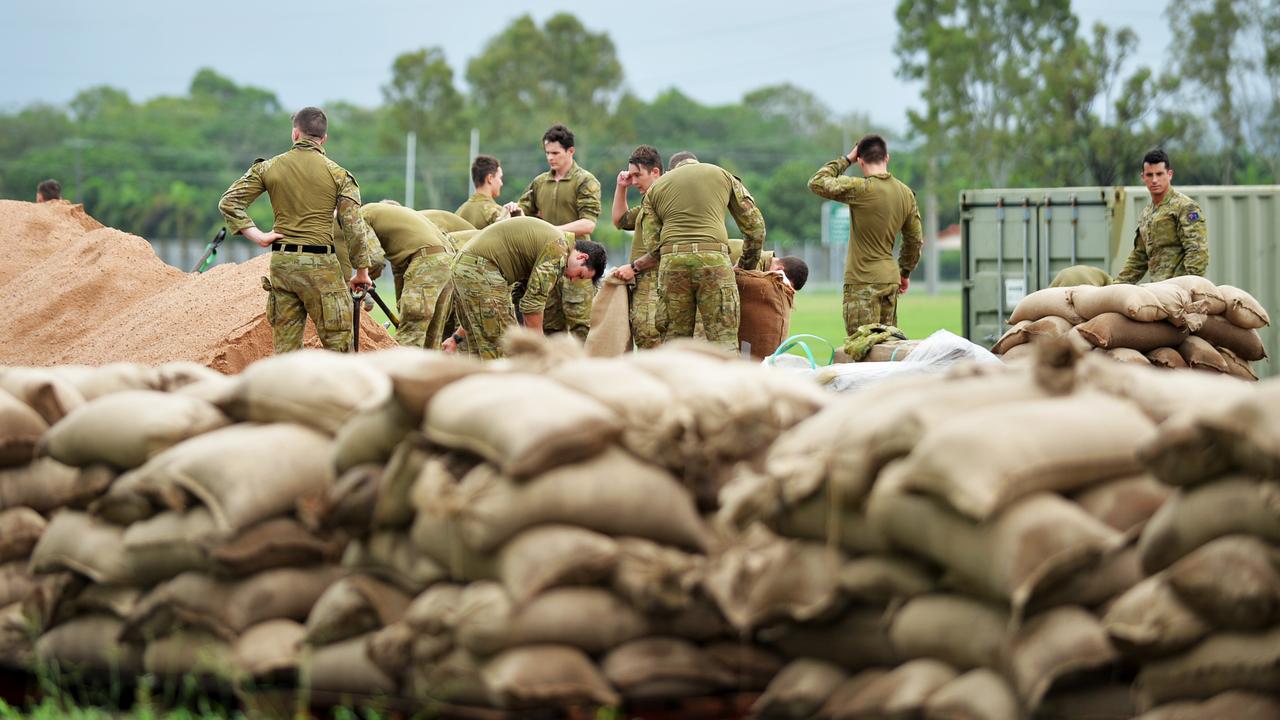 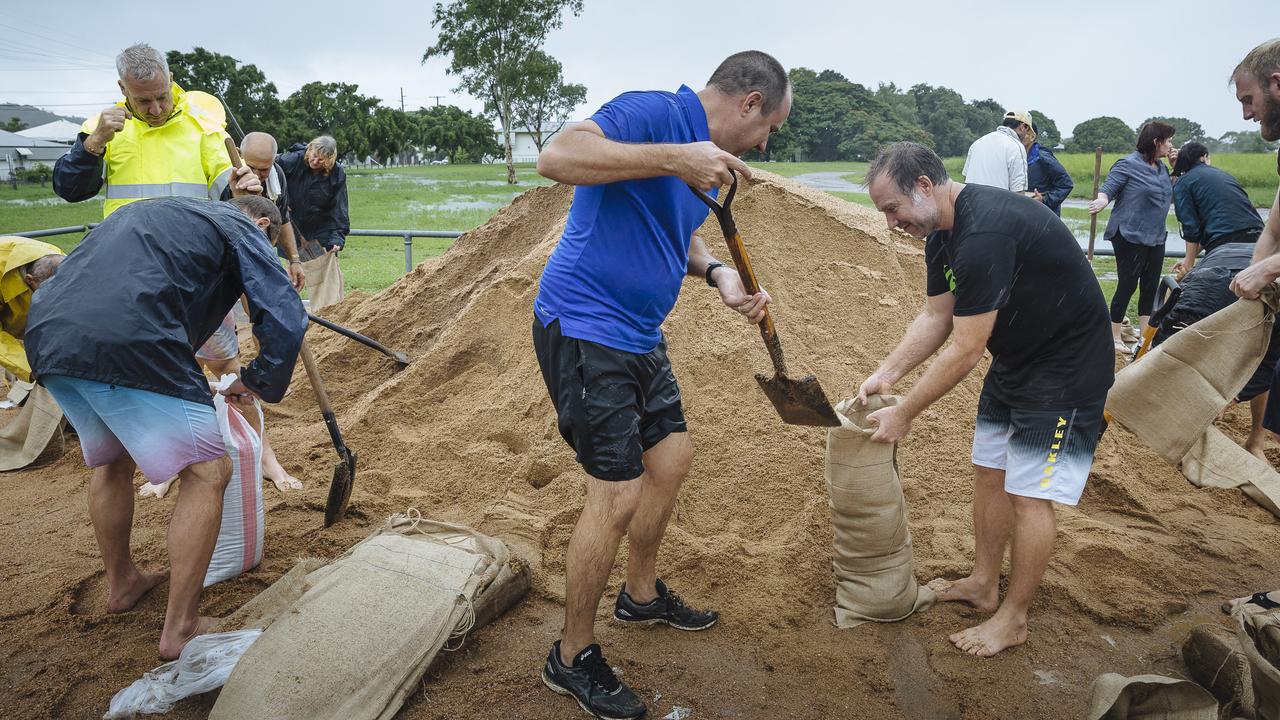 Locals filling sandbags at Hermit Park in Townsville on Friday, February 1. Stacks of sandbags can be used as a bank or levee to hold back water. Picture: AAP

An extra 34 operational Queensland Ambulance Service staff have been deployed* to north Queensland to assist in the flood response.

Queensland Premier Annastacia Palaszczuk praised the work of emergency services but warned residents it wasn’t over yet.

“We’ve never seen anything like this before,” she told TV program Today.

“In Queensland, of course, we’re used to seeing natural disasters*, but Townsville has never seen the likes of this.

“Don’t go sightseeing, if you don’t need to be out on the roads, don’t be.”

CLASSROOM ACTIVITIES
1. Flood Survival Checklist
Work with a partner to prepare a flood survival checklist for you and your family. This is a plan (similar to a fire safety plan) of what to do if your area becomes flooded (as this often happens in places such as the far north of Queensland).

Your checklist should include the following details:

How to prepare your house inside and out

Where you would evacuate to

Also prepare a list of Do and Don’ts to do if you are in a flooded area.

2. Extension
Write a letter to a primary school in Townsville letting the students that live there know that we are thinking of them and hope the floods ease quickly and not cause too much damage. What else could you do to show your support for kids going through this natural disaster in Townsville?

HAVE YOUR SAY: Send a message of support to Townsville residents.
No one-word answers. Use full sentences.