A moonbow in Yorketown, South Australia, taken by Sue Hancock on June 18 and posted by the Bureau of Meteorology on its Facebook page. Picture: @sue_hancock_photograph/Instagram

A rare moonbow has appeared over Mt Gambier Airport in South Australia.

The magical-looking weather phenomenon* — also called a lunar* rainbow or a white rainbow — was captured by the airport’s webcam about 3am on Tuesday.

Moonbows are a version of a regular rainbow but instead of being made with light straight from the sun, it is made with moonlight. Few people ever get to see one. Here’s what you need to know to be a moonbow expert.

WHAT’S A MOONBOW?
A moonbow is very similar to a rainbow, except it is much, much rarer and much fainter, because the light at night is fainter. We’re more likely to see a moonbow when the moon is full and low behind you. You can see it rising here behind the lighthouse at Byron Bay, NSW.

Your best chance of seeing a moonbow is when:

Big waterfalls are the best places to see moonbows as a fine mist rises all around the falls. Victoria Falls in Zambia is one of the best places in the world to see a moonbow. Victoria Falls, on the border of Zambia and Zimbabwe. There are constant rainbows over the falls in daylight and it’s one of the best places in the world to see a moonbow. Picture: iStock The Sun is a big, hot ball that gives off a lot of energy that travels through space towards Earth in waves. Some of these waves are visible light.

The Sun is a big, hot ball that gives off a lot of energy.

This energy moves away from the Sun in waves called electromagnetic radiation.

Scientists have grouped these energy waves into a spectrum, or range, depending on the wavelengths. On the spectrum there are seven main types or groups of wavelengths: Sunlight — the type of light from the Sun that humans can see — usually looks white to us.

LIGHT WE CAN SEE
We usually see visible light from the Sun as white light. The white, however, is really a mix of a range of energy waves of slightly different wavelengths, which have different colours:

WHEN SUNLIGHT HITS WATER
When white-looking sunlight hits the edge of a raindrop, it slows down and changes direction. This is called refraction. The different colours within the white sunlight each bend slightly differently at the edge of the raindrop, spreading out and separating. 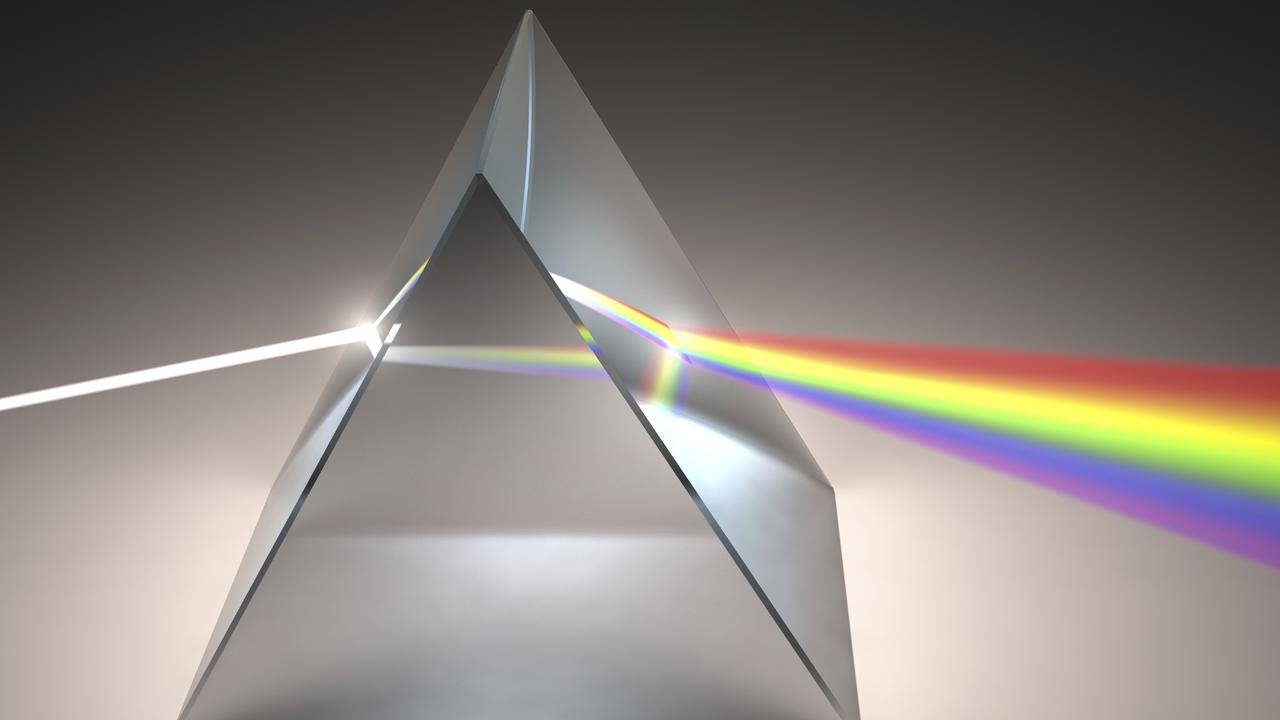 This crystal prism is a way of showing refraction of light — bending and breaking up into separate colours — that happens when sunlight enters a raindrop.

The light inside the raindrop then reflects or bounces off the back of the raindrop and spreads out even more.

The spread-out light in a shower of rain across the sky is what we see as a rainbow.

Moonbows are often almost white because they’re being made in smaller droplets of water, so there’s not as much bending and separating of the different colours of light going on as there is to make a regular rainbow. A rainbow appears over the south end of Bondi Beach. Picture: Damian Shaw

HOW TO SEE A RAINBOW
Though it’s very rare to see a moonbow, rainbows are much more common.

You’re most likely to see a rainbow when there’s some sunshine behind you and some rain in the sky in front of you. There are more rainbows around early or late in the day, when the Sun is lower and can shine on the raindrops in the sky without being blocked out by clouds. An incredibly clear rainbow over the sea. Picture: iStock

What causes hail and is it dangerous?

Why does lightning strike the same place twice?

CLASSROOM ACTIVITIES
1. I Can Sing a Moonbow
Work with a partner and rewrite a known rainbow song changing the words to relate to a moonbow, or create your own using the information you’ve just read.

Some rainbow songs you may know of include ‘Over the Rainbow’ or ‘I can sing a rainbow’.

Try to include some moonbow facts in your song and practice singing your new song together to perform to the class.

2. Extension
Create a flowchart diagram to explain how a moonbow is created. Try and make it easy to understand using simple language. In your flowchart mention how it differs to the creation of a rainbow.

VCOP ACTIVITY
Breaking News: A Picnic on the Moon
Mt Gambier residents were the first to be invited to a twilight picnic on the moon last Tuesday. Witnesses say that they saw The Man on the Moon send down the moonbow at 3am on Tuesday inviting residents to follow the moonbow to a special twilight picnic with all of his favourite celebrity friends. One resident said he was so excited to finally be able to attend the special VIP event and shared with us a few of the special guest list including; 3 unicorns, a golden pegasus, several fairies, pixies and even a couple of juvenile dragons. Unfortunately, it was strictly a ‘no recording’ event and The Man on the Moon asked guest to ‘simply enjoy the experience, rather than worry about taking photos and videos’. Another guest said ‘it was incredible and an experience of a lifetime, I recommend it to anyone.’

Everyone is wondering when and where the next moonbow invitation will appear.

Write a letter to The Man on the Moon trying to convince him why your local area should be the next place on the event schedule.

Then create an invitation to the event inviting some very special family and friends along.

Write a diary entry imaging the event was last night and you were able to attend. What happened? Who was there? When was it? How did you feel? Did anyone go with you?

HAVE YOUR SAY: Have you ever seen a moonbow? Describe the moonbow or the best rainbow you have seen.
No one-word answers. Use full sentences to explain your thinking. No comments will be published until approved by editors.