The rain bomb unleashed on Queensland and NSW has been just as destructive as the other type of H bomb from the 1950s, according to cartoonist Mark Knight.

Climate change is certainly making its presence felt here in Australia. It seems every summer there is a major catastrophic* weather event down under.

The weather “wheel of fortune” spins between bushfires, droughts, floods and cyclones. This summer it seems we’ve landed on floods, with southern Queensland and NSW the unfortunate recipients.

To give you an idea of the magnitude* of water dumped, Brisbane had three consecutive* days of rainfall above 200mm. That’s per day!

Huge areas that have never been flooded before have gone under. Countless homes, properties, businesses and infrastructure have been affected.

Insurers are saying the bill will be in the billions of dollars. And sadly there has been loss of life.

Such was the speed of the inundation*, the weather bureau was referring to it as a “rain bomb” dropped on an unsuspecting population. 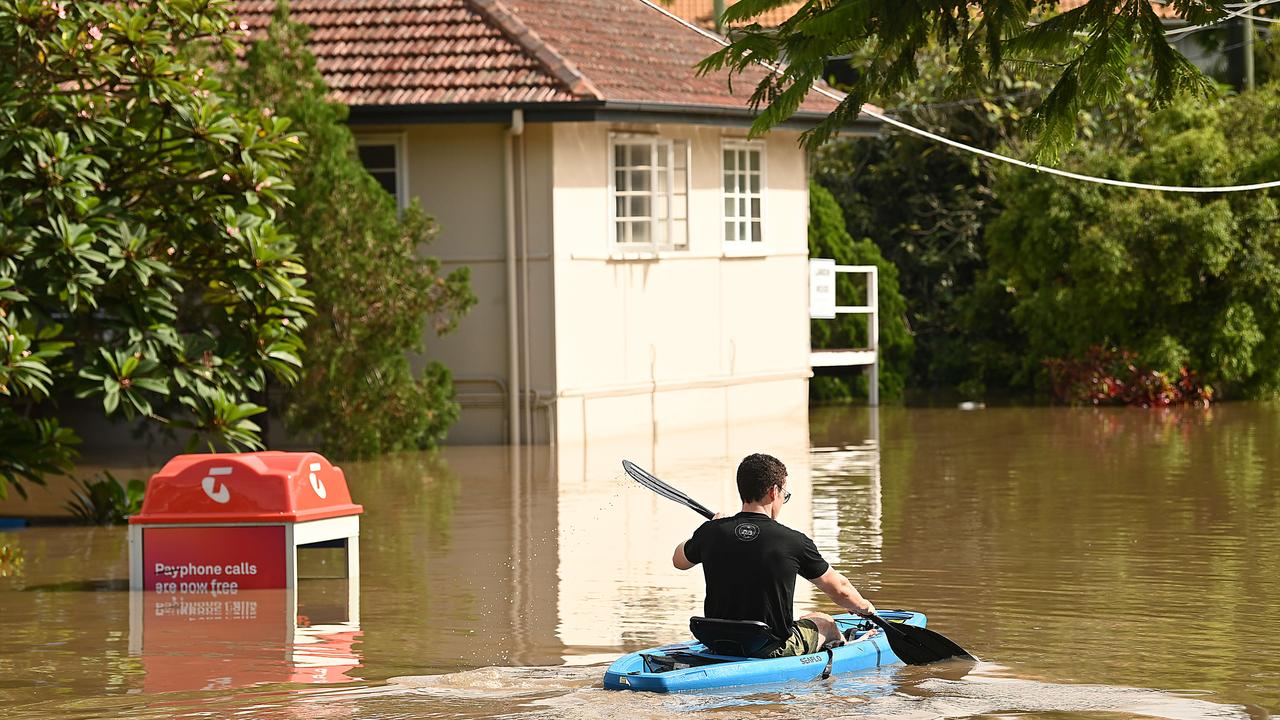 A student paddles around their flooded apartment block in the Brisbane suburb of St Lucia after the rain swamped the Queensland capital. Picture: Lyndon Mechielsen

I feel it is part of my role as an editorial cartoonist to capture these major events and try to illustrate what has just happened so we can try to understand it. These cartoons do not try to be funny, they are interpretative*.

When I heard the “rain bomb” term used, I thought it a very apt* way to describe the devastation it caused. It has been destruction on a massive scale, just like if an actual bomb had been dropped.

I wanted to try to illustrate in a cartoon what a “rain bomb” might actually look like? The rain bomb hit so fast and furiously that cars and a bus were stranded in floodwater next to Brisbane’s Suncorp Stadium. Picture: Lyndon Mechielsen

When I was looking at pictures of atomic bombs* from the 1950s the idea came to me. I realised that one of the most powerful bombs created was the hydrogen bomb*, commonly referred to as the H Bomb.

My schoolboy chemistry suddenly kicked in and I recalled the formula for water was H2O. (Who says you never use anything you learn in school later in life!)

I wanted to illustrate what goes on inside an H2O rain bomb, so instead of uranium* and plutonium* and isotopes* of hydrogen* leading to an explosive fusion*, I would paint the equally powerful forces of nature such as a storm cell, thunderous black clouds and sheets of flooding rain. It is contained inside a regular bomb casing as it falls from the skies over a flooded landscape.

The cartoon seeks to illustrate that the forces of nature, combined with climate change, can be a powerful and humbling* destructive force when unleashed*.

School’s out as Queensland floods cause havoc

Dealing with the world’s worries

CLASSROOM ACTIVITIES
1. Add speech
Cartoonist Mark Knight has not used any speech in this cartoon, letting the imagery speak for itself.

Now come up with a character – a person or animal – that could be added to the cartoon. Write them down, along with a short explanation of what they are doing in the cartoon.

Next write a thought bubble or quote from that person or animal that will make the meaning of Mark’s cartoon clearer for children who haven’t been reading the news this week.