It’s so cold on Antarctica that even when it’s warming up, it’s still really freezing! What happens when you try cooking in Antarctica? Everything freezes before you can get a chance to eat it.

Cooking a hot meal outdoors in Antarctica isn’t easy, with the temperature plunging* as low as -80C.

The astrobiologist has been working in the remotest* scientific research base in the world.

Astrobiologists study whether life could exist beyond Earth and how we could find it if it does. The freezing, harsh environment of Antarctica is a good place to be to study astrobiology. Antarctica is very dry, as all the water is frozen. Within a second all moisture in food freezes. Pouring liquids is impossible. Picture: Cyprien Verseux

In fact, Concordia research station is farther away from human life than the International Space Station.

Dr Verseux decided to see whether the relatively* warm spring temperatures of -60C would allow some outside cooking, but he reported from Antarctica that the experiment wasn’t a great success. Gooey chocolate spread became solid and was so hard it could support its own weight. Not great for your teeth. picture: Cyprien Verseux

“Having lunch on the roof was not a good idea,” the French scientist said.

His meal of spaghetti was frozen before he could get the fork into his mouth.

When he tried to fry eggs, the yolks froze mid-air before they hit the pan. “Temperatures are rising, -60C already feels warmish* after the winter months, and we decided to take photos showing the cold in a fun way before we get summer temperatures.” Hot buttered toast with sticky marmalade is what we would have. Dr Verseux had to make do with frozen marmalade, more like a hard boiled lolly. Picture: Cyprien Verseux

The highest recorded temperature at the South Pole is -12.3C, which was on Christmas Day 2011.

“The temperatures are so low here that just giving numbers is not very evocative*.” 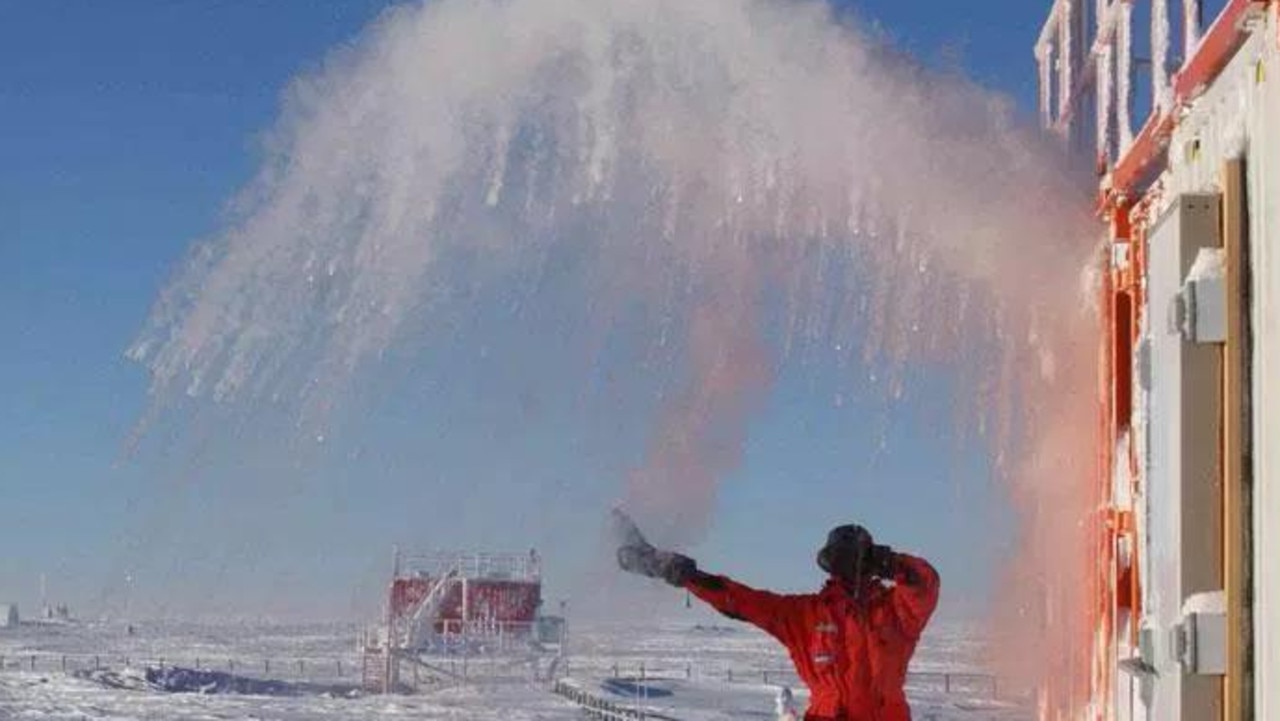 Liquid freezes instantly, so although you don’t get wet if you throw a drink into the air, it’s pretty hard to satisfy your thirst. Picture: Cyprien Verseux

Dr Verseux appeared in news stories in 2016 when he was one of six scientists who spent a whole year isolated in a dome in Hawaii as part of a NASA experiment to see if it was possible to live on Mars.

This story originally appeared in The Sun and was reproduced with permission. No skin can be exposed in these temperatures without risking frost bite, which is a painful injury. The moisture in your breath freezes instantly. Picture: Cyprien Verseux

remotest: the longest distance from cities and towns

relatively: when compared to

evocative: brings strong feelings or pictures to your mind

1. What is an astrobiologist?

2. Why would you go to Antarctica to study astrobiology?

3. What happened to the spaghetti?

4. What temperature feels warmish to him?

5. What is the highest recorded temperature at the South Pole?

This story is about what happens to food on one of the coldest places on earth. The hottest temperature ever recorded was at Death Valley in the USA. In 1913, it reached over 56.7C.

What do you think would happen to each of the foods in the story in the hottest temperature? For each food, write a description of what it would look like and why. Create a drawing or picture of the food as well.

Extension: Imagine that you are Dr Verseux. Write a diary for a day in your life at Concordia station.

HAVE YOUR SAY: What would you study if you could be a scientist? What do you want to know the answer to? Why?