Inside the eye of Hurricane Dorian as it hits Bahamas, heads for US Inside the eye of Dorian, taken by the US air force “Hurricane Hunters”. This photo shows what is called the “stadium effect”, in which the clouds around the eye rise up on all sides until it looks like a giant bowl or sports arena. Picture: Garrett Black/Jordan Sun/Hunter McAlister/US air force/Twitter

Pilots from the US air force have taken incredible photos from inside the eye of Hurricane Dorian.

The massive hurricane has hit the Bahamas and is heading towards the US state of Florida.

The images were captured by the air force’s 53rd Weather Reconnaissance Squadron — also known as the “Hurricane Hunters”.

The squad flies into powerful storms to gather information on wind speed and direction, pressure, temperature and humidity for the US National Hurricane Centre.

The eye of a hurricane is eerily calm compared to the fury of the winds swirling around it.  It can be 20-50km in diameter and flying through it is extremely bumpy.

The edge around the eye is like a whirlpool of wind and is called the eyewall.

The Hurricane Hunters captured an image of the hurricane’s “stadium effect”, which makes the hurricane eye look like a bowl of a sports stadium.

The effect is caused by clouds of rapidly-rising air swirling into the storm and moving outwards from the core, causing the eye of the storm to become larger.

Dorian hit the islands of the Bahamas on Sunday as a Category 5 and brought with it wind up to 300kmh. Category 5 is the most severe rating in the international hurricane wind scale of 1-5. The wind was so strong roofs were torn off houses and cars were flipped over.

Bahamas Prime Minister Hubert Minnis said: “In some areas you cannot tell the difference as to the beginning of the street or … where the ocean begins.” 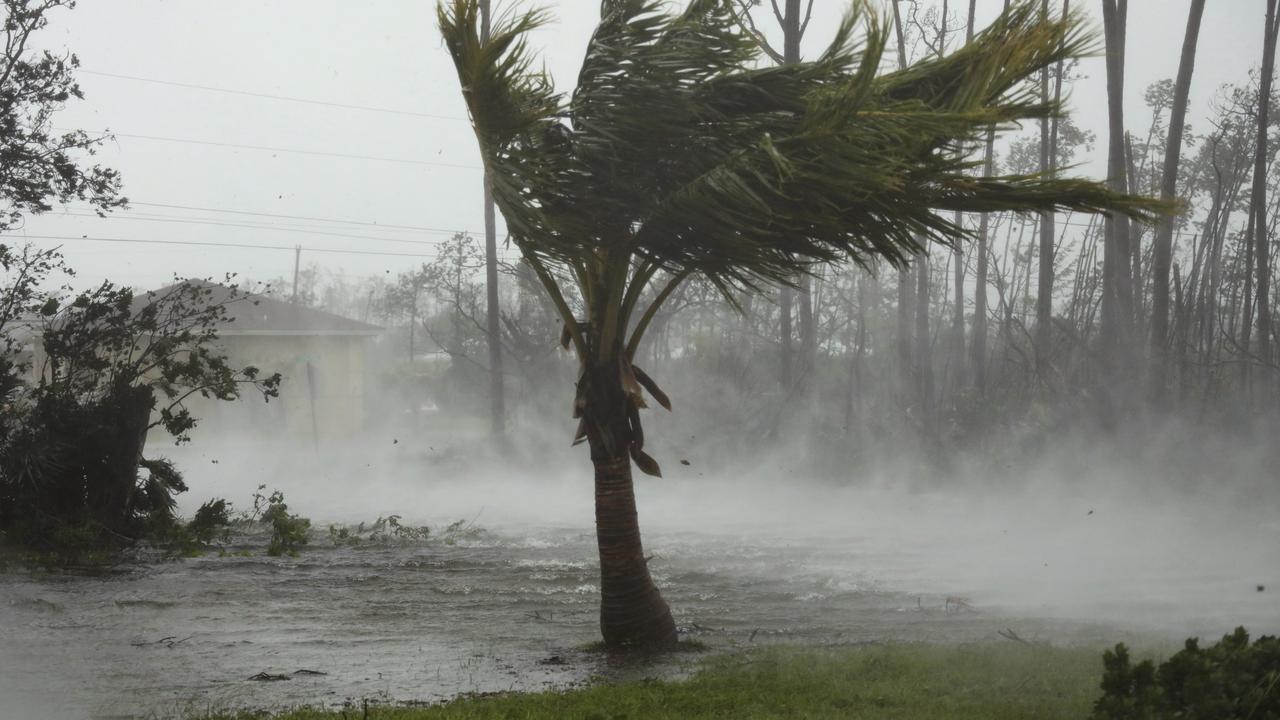 Dorian is being described as the second strongest Atlantic Ocean storm on record and the joint strongest hurricane ever to make landfall*.

Dorian has weakened slightly to Category 4 as it moves extremely slowly — just 1kmh — towards the US coast. Such slow movement means the severe weather keeps damaging the area it is moving over for a longer time than a hurricane that moves away faster. The wind speed over the Bahamas was still 250kmh on Monday morning Bahamas time. 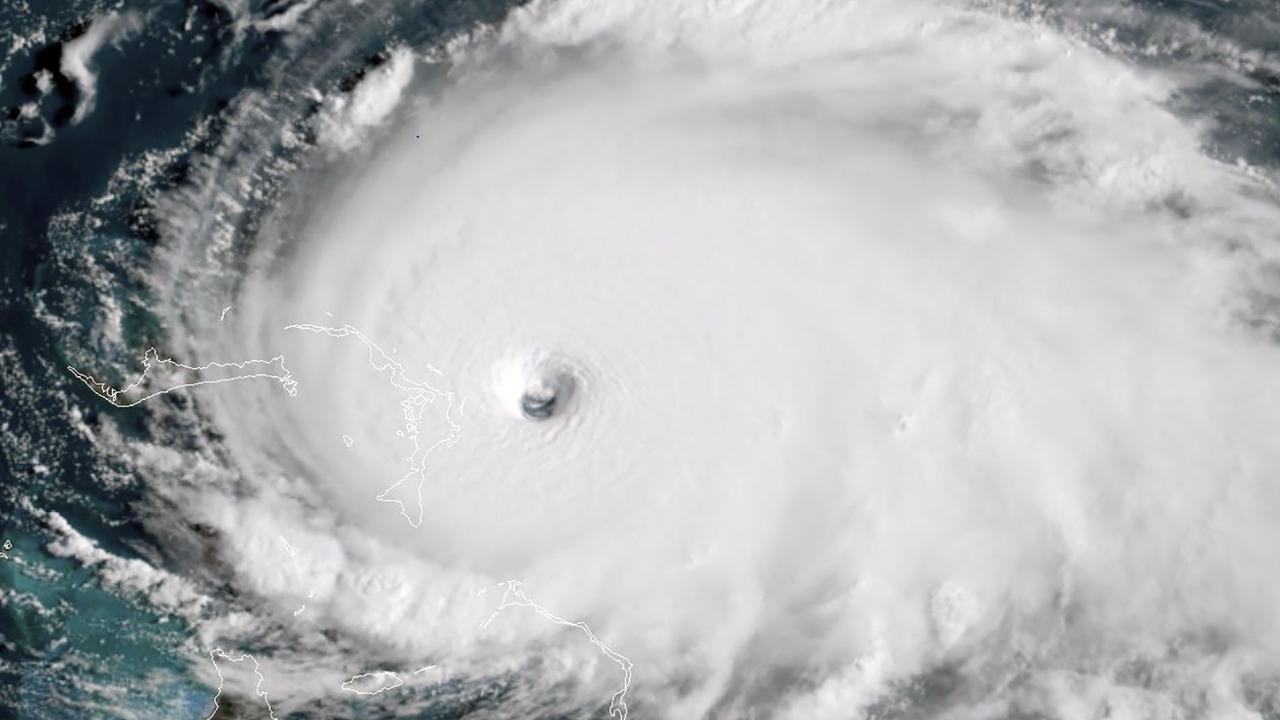 Dorian from above, photographed by a satellite, as it approached the Bahamas on August 31. Picture: AFP/NOAA /RAMMB

Though no one can predict exactly when or how severely the hurricane will hit the US, people are working hard to prepare to stay safe. Preparation includes piling sand bags in front of doorways to hold back floodwaters and putting covers over windows to prevent wind or debris* smashing the glass. People in areas likely to be hit hard by Dorian have been ordered to evacuate.

It is expected to get “dangerously close” to the Florida coast on Monday night local time, which is Tuesday in Australia.

It is then expected to move north to coastal Georgia and South Carolina on Wednesday night and Thursday local time.

Airlines are cancelling flights and some airports have closed. To help people evacuate, American Airlines has capped the price of one-way flights out of all cities covered by travel alerts and are not charging people to take luggage or pets with them.

Walt Disney World in Florida was to close early on Tuesday. 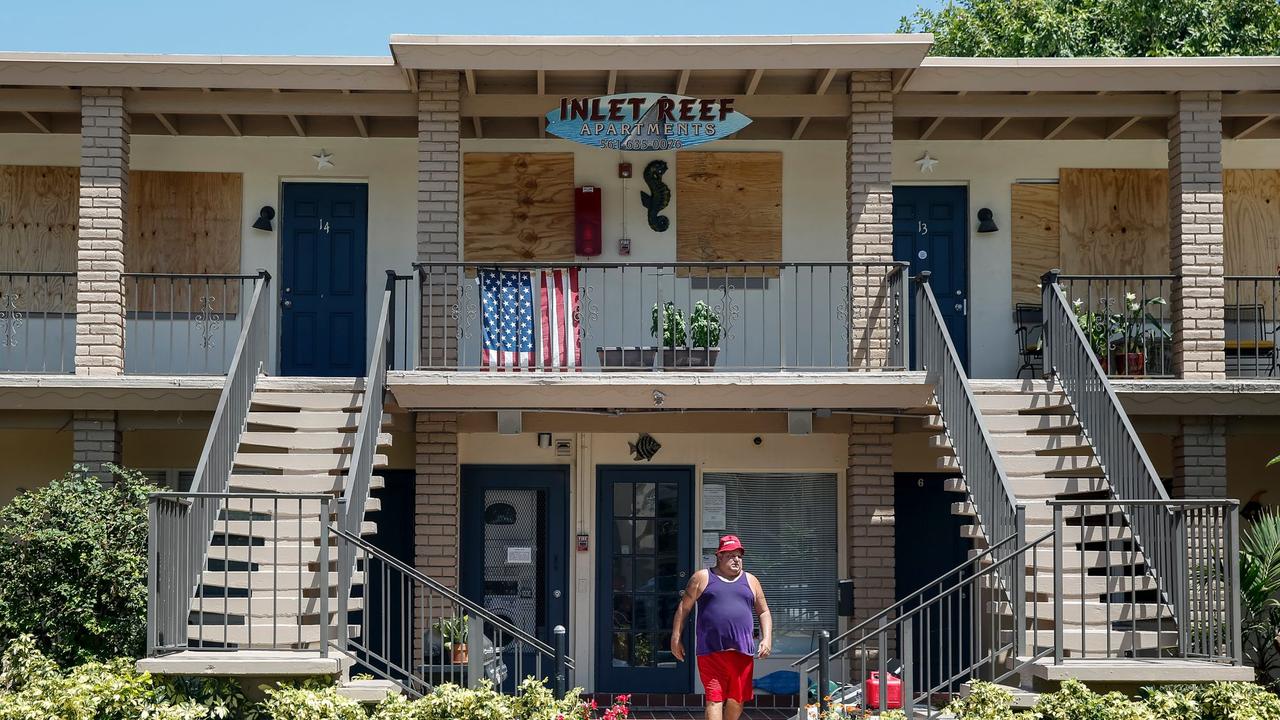 Maintenance man John Francione has boarded up the windows of this apartment building on Riviera Beach, Florida, US, ahead of the arrival of Dorian. Picture: AFP

HURRICANE, TYPHOON OR CYCLONE?
A tropical cyclone is a general term used by meteorologists* to describe a rotating weather system that forms over tropical or subtropical water.

If that weather system becomes especially severe, they are then renamed a tropical cyclone, a hurricane or a typhoon, depending on where they form. Typhoons form over Asia, or the northwest Pacific Ocean. Hurricanes form around America, or the North Atlantic, central North Pacific and eastern North Pacific. When the storm forms around Australia, over the Indian Ocean or South Pacific Ocean, it is called a tropical cyclone.

MEASURING STORMS
There are lots of ways to measure hurricanes, typhoons or cyclones, including wind speed, the air pressure at the centre of the storm, the money value of the damage caused and whether anyone dies or is injured.

New Scientist magazine has reported that Dorian is the equal strongest hurricane ever to make landfall in the Atlantic, tied with the Florida Keys Labor Day Hurricane of 1935. No wind measurements were taken for the 1935 hurricane.

Hurricane Gilbert in 1988 is regarded by some measures as the most intense hurricane to make landfall on the US because the air pressure at its centre was extremely low.

Another incredible hurricane, Camille of 1969, destroyed every wind-recording instrument, so no one knows what the maximum wind speed was when it reached land.

US prepares for Hurricane Florence

CLASSROOM ACTIVITIES
1. Hurricane survival
People who live in coastal areas prone to hurricanes (or cyclones as we call them in Australia) are used to preparing for this type of weather, although this hurricane looks very strong so they need to be extra prepared.

Create a Hurricane Survival Kit of what these people need to do and have packed ready to face the threat of Hurricane Dorian.

Include in your kit —

2. Extension
What measures has the US Government put in place to help the US citizens prepare and be safe during Hurricane Dorian? What else could you suggest they should do to help? Will they be instrumental in the clean-up after the Hurricane has passed?

List the cyclones you know of that have hit Australia, especially the category 5 ones?

Once you have your list, work with a partner to make them into flashcards.

Place the flashcards face up between the two of you and create a new story using a fact or topic idea from the article.

See if you can get through all your flashcards.

HAVE YOUR SAY: Have you or anyone you know had to prepare for a major storm, flood, fire or other natural disaster? What preparations were made?
No one-word answers. Use full sentences to explain your thinking. No comments will be published until approved by editors.