How cold was Ice Age cold? Part of the West Antarctic Ice Sheet and mountains. During the last Ice Age, the polar regions, including Antarctica, cooled more than the tropics. Picture: Getty

Scientists have calculated just how cold it got on Earth during the coldest part of the last Ice Age, using ocean plankton fossils and climate models.

The average global temperature during this period — known as the Last Glacial Maximum from roughly 23,000 to 19,000 years ago — was about 7.8C, about 7C colder than 2019, the researchers said on Wednesday.

The researchers made their calculations with the aid of chemical measurements on tiny fossils of zooplankton and the preserved structures of fats from other types of plankton that change in response to water temperature.

This information was then plugged into climate model simulations* to calculate average global temperatures.

“Past climates are the only information we have about what really happens when the Earth cools or warms to a large degree. So by studying them, we can better constrain* what to expect in the future,” said University of Arizona paleoclimatologist* Jessica Tierney, lead author of the research published in the journal Nature.

During the Ice Age, which lasted from about 115,000 to 11,000 years ago, immense* ice sheets covered large parts of North America, South America, Europe and Asia. Large mammals well adapted to a cold climate such as the mammoths, mastodons, woolly rhinos and sabre-toothed cats roamed the landscape. 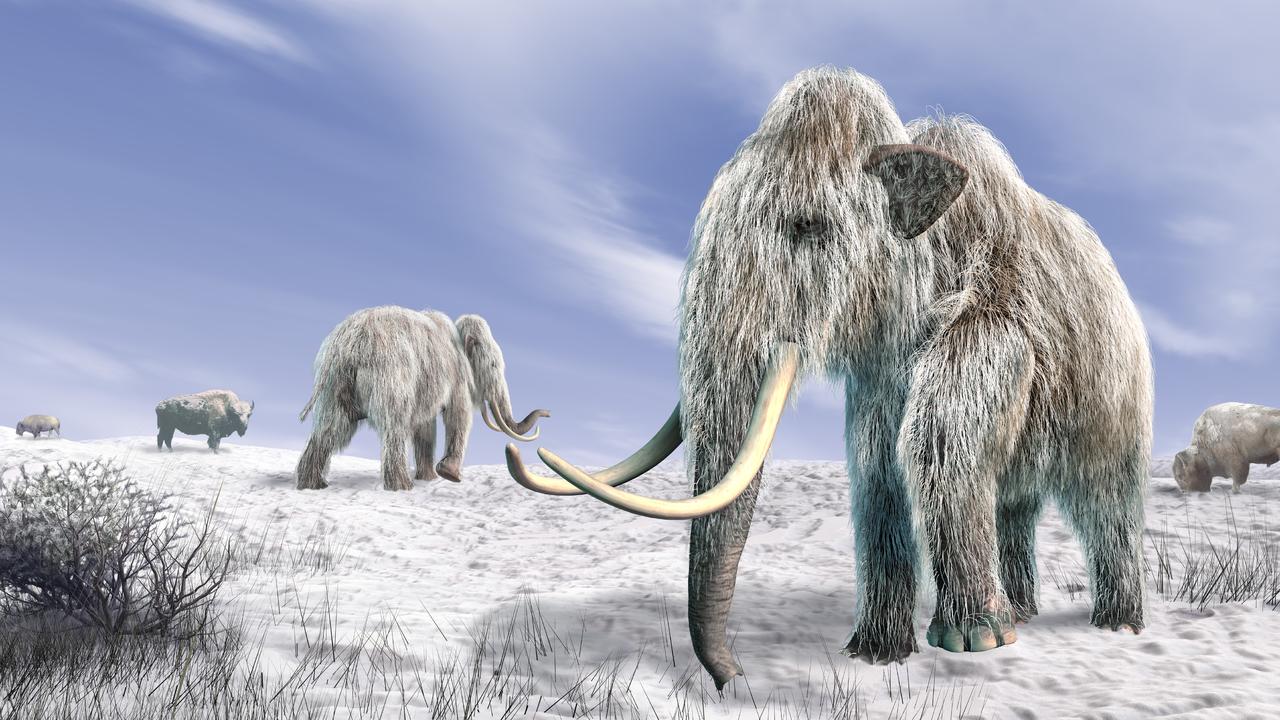 Large mammals such as woolly mammoths and bison were well suited to the Ice Age climate.

Humans entered North America for the first time during the Ice Age, crossing a land bridge that once connected Siberia (in modern-day Russia) to Alaska (now the northernmost state of the US) with sea levels much lower than they are today.

Human hunting is believed to have contributed to mass extinctions globally of many species at the end of the Ice Age.

“What is interesting is that Alaska was not entirely covered with ice,” Dr Tierney said.

“There was an ice-free corridor that allowed humans to travel across the Bering Strait, into Alaska. Central Alaska was actually not that much colder than today, so for Ice Age humans it might have been a relatively nice place to settle.” A preserved woolly rhino named Sasha, which lived in northeastern Siberia before becoming extinct around 14,000 years ago, probably as a result of the Ice Age coming to an end. Picture: AFP/Albert Protopopov

ICE AGE IN AUSTRALIA
During the last Ice Age average temperatures across Australia decreased by 10C, rainfall decreased, and cold, dry winds blew across the land.

What was previously a place of plenty, with lots of water and food, became more difficult for the First Nations people. It has been suggested that 80 per cent of the Australian continent was abandoned during this period.

The Bibbulum people of southwest Western Australia talk of a far off time when it was not as warm and comfortable as it is today. Stories of this time begin with ‘In the nyitting times …’ which translated means ‘In the icy cold times of long, long ago …’

About 14,000 years ago, the temperature began to rise and plant and animal populations returned to the levels of earlier days.

Changing temperatures also produced large variations in sea levels. At one stage during the Ice Age sea levels were about 100m below their present level and what is now mainland Australia was connected to modern Papua New Guinea and Tasmania.

When the sea level rose again as the temperatures rose the land masses were separated by water.

Australian megafauna died out due to climate change

CLASSROOM ACTIVITIES
1. Make a List
List the changes that were caused by the Ice Age. Rank the changes in order of their importance.

2. Extension
How do you think Australia’s First Nations peoples, such as the Bibbulum people, were able to survive the Ice Age? Write down as many things that you can think of.

HAVE YOUR SAY: If you could go back in time to the Ice Age, where would you explore?
No one-word answers. Use full sentences to explain your thinking. No comments will be published until approved by editors.