Heatwave Harry? Naming the threat may save lives A man dives in the sea on the beach at Menekse, Turkey, during a record-breaking heatwave in July 2, 2017, that triggered forest fires. Picture: AFP

Giving heatwaves names and strength ratings, as for hurricanes, cyclones and typhoons, could help people understand how dangerous they are.

Large parts of the world — including in Australia — have seen fast-worsening heatwaves in recent years.

And in the US, more people die each year from heatwaves than from storms and floods.

“People do not understand this risk and we need to change that,” said Kathy Baughman McLeod, director of the Adrienne Arsht-Rockefeller Foundation Resilience Center in the US, which works to cut climate change, migration and security risks.

With 2020 set to be one of the hottest years on record, in a long string of them, “extreme heat is or will be felt by everyone, everywhere, at some point. We have to build awareness to this invisible threat,” she told an online event.

The push to name heatwaves is backed by the Extreme Heat Resilience Alliance (EHRA), a group of 30 mayors of big cities, as well as health, climate change and policy experts and insurance officials from around the globe. 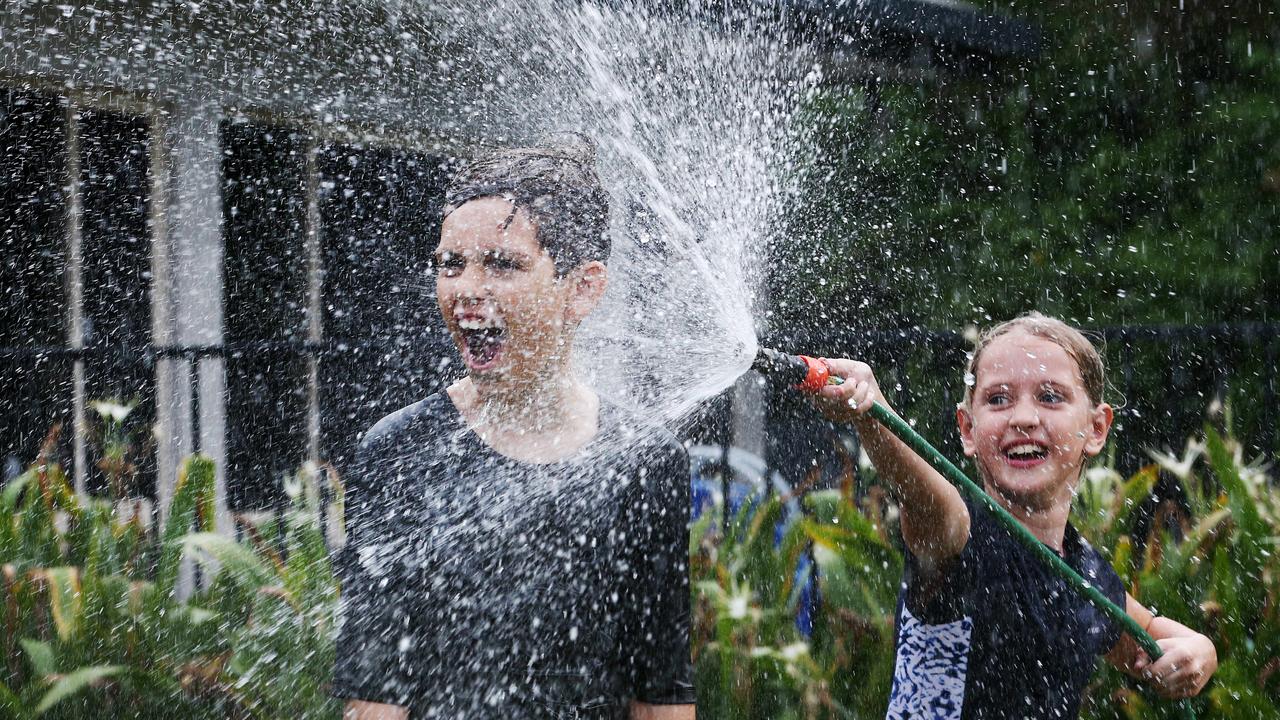 Siblings Scott and Stella cooled off from the heatwave conditions that the hot, sunny weather brought to Cairns, Queensland in February. Picture: Brendan Radke

Unlike floods or storms, heatwaves are largely an unseen risk, with many deaths occurring inside homes and attributed* to heat only when “excess deaths” above normal rates are examined, public health researchers say.

A report published on Monday by the U.S. National Bureau of Economic Research found that by the end of the century, heat deaths globally could nearly equal those from all infectious diseases combined today, if the planet continues to warm at its present pace.

The research, done by the Climate Impact Lab and based on data from 40 countries, found the problem will be most severe in the already hot tropics, in countries from Bangladesh to Sudan, where people may struggle to afford cooling.

At Tuesday’s event, Athens Mayor Kostas Bakoyannis said his city (in Greece) was one of those most at risk from extreme heat in Europe, and was likely to see the tourism it depends on slashed as summer heatwaves grow.

He described rising heat as “one of our city’s greatest challenges”.

Mayor Francis Suarez of Miami, US, similarly said his city could see the number of 40C days each year more than double to 100 by 2050, bringing stronger hurricanes from warmer seas and more mosquito-driven disease threats. In cities such as India’s Chennai, where the seasons are already “hot, hotter and hottest”, soaring temperatures could reduce food and water security for the poor, said Krishna Mohan, Chennai’s chief resilience officer.

Finding ways to counter heatwave risks, from providing heat insurance to expanding access to affordable cooling, will be crucial* to protect the 3.5 billion people expected to be hit by deadly heatwaves by mid-century, the EHRA noted.

Almost half of those at risk – 1.6 billion people – are in cities, EHRA members said.

Ricardo Lara, California’s insurance commissioner, said heat was a particular problem for the poor who lack airconditioning and access to green spaces. A boy cools off under a fountain beside the Seine River in Paris, France as Paris records it highest temperature on record on July 31, 2020. Picture: Getty Images

He remembers growing up in East Los Angeles in the US and sleeping out on his home’s porch on hot nights, in an effort to stay cool. Now he worries job losses due to COVID-19 could leave many people unable to pay for cooling as summer temperatures spike.

“Heatwaves are a risk that has never been fully recognised but one we are currently living with,” he said.

Extreme heat is “going to cause death and migration”, he warned. “What strikes me is how little we understand this.” A woman looks through the glass of the polar bear enclosure at the zoo in Mulhouse, France in August 2018, during a long heatwave across Europe. Picture: AFP

Tiger ice blocks and other heat hacks for a hot Earth

CLASSROOM ACTIVITIES
1. Create a system
If a naming and/or a strength rating system was to be adopted for heatwaves, there would need to be a set way these names or ratings are determined. Research how this works for other weather events such as hurricanes and cyclones. Then, invent a system that could be used for heatwaves. Make an A4 page explanation of your system. Try to keep your system simple and easy to understand while also being impactful in the way it communicates the level of danger to the community.

2. Extension
Imagine you have a very important job as a “safety communications manager”. You need to warn the community of an impending heatwave and how they can keep safe. Write and record a 20-second safety message that could be played on the radio.

HAVE YOUR SAY: How did you stay cool and safe during a heatwave?
No one-word answers. Use full sentences to explain your thinking. No comments will be published until approved by editors.