The photo that has shocked the world of sled dogs wading through water on the melting sea ice during an expedition at Inglefield Bredning, northwestern Greenland. Picture: AFP/Danish Meteorological Institute/Steffen Olsen

A photo of a pack of sled dogs appearing to walk on water in Greenland has shocked the world. It shows a massive and unusual sheet ice melt across the island.

More than 40 per cent of Greenland experienced melting last Thursday, June 13, with two billion tonnes of ice estimated to have been lost on that day alone.

While it is normal for some ice to melt in warm weather, it is very unusual to see so much ice melting in the middle of June.

Greenland is home to the second largest sheet of ice in the world, but with Arctic sea ice at a record low it has turned parts of the country into a pool of icy water.

The photo of dogs pulling a sled through the water was snapped last week by Steffen Olsen, a climate researcher at the Danish Meteorological Institute.

The photo was taken in the middle of an inlet called Inglefield Bredning in northwestern Greenland.

While the ice beneath the water is about 1.2m thick, the water pooled on top makes getting around difficult. Communities in Greenland rely on the ice sheet for transport, hunting and fishing. 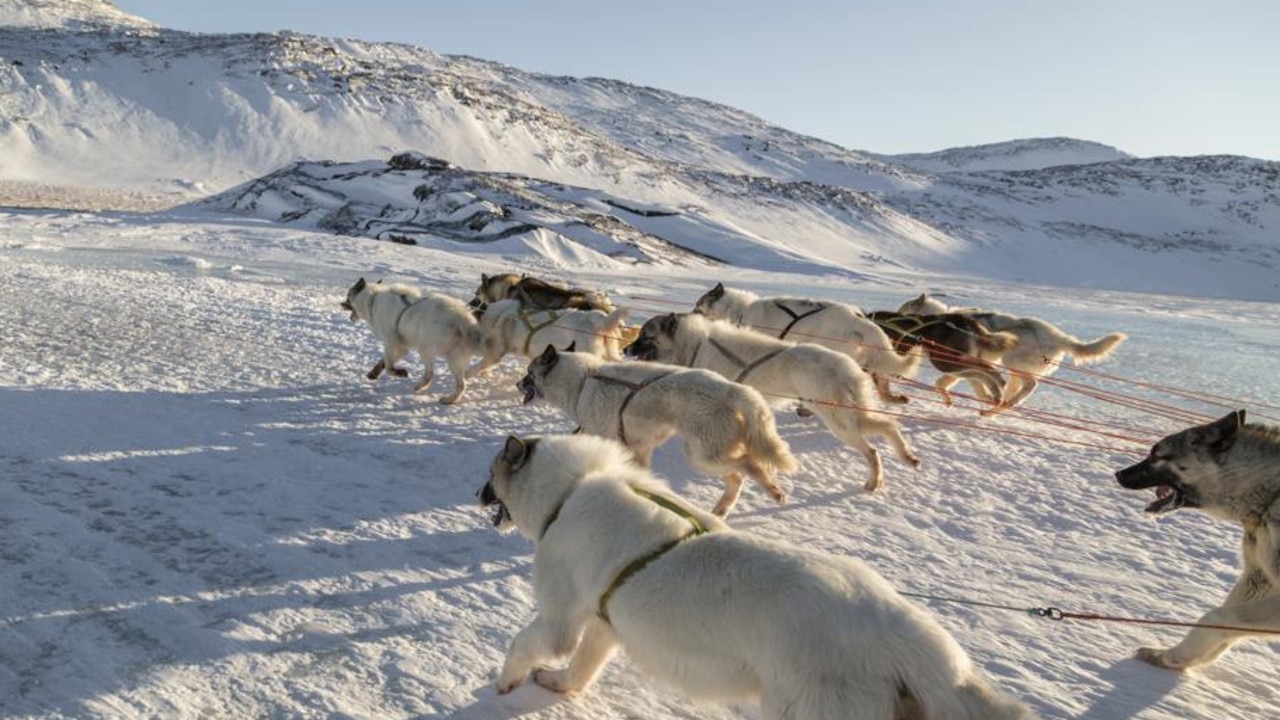 The people of Greenland rely on ice like Australians rely on roads.

The average melting season for Greenland runs from June to August, with most of the melting happening in July.

This kind of spike* in Arctic sea ice melting has been seen since 2012, where almost the entire ice sheet experienced melting for the first time in history. Seeing this much melt so early in the season doesn’t bode* well for the amount of ice loss expected for the rest of the year.

Research scientist at the University of Georgia, Thomas Mote, told CNN that “all signs seem to be pointing to a large melt season”.

Along with having an early melt season, snow cover was also lower than average in western Greenland.

“We’ve seen a sequence of these large melt seasons, starting in 2007, that would have been unprecedented* earlier in the record,” Mr Mote said.

GREENLAND’S ICE SHEET
This is a large body of ice that is 2400km long.

It covers about 80 per cent of the surface of Greenland across 1.7 million square kilometres.

The Greenland ice sheet is the second largest body of ice in the world, second to the much larger Antarctic ice sheet.

Together, the two ice sheets hold more than 99 per cent of the fresh water on Earth.

When the Greenland ice sheet formed it caused the land under it to sink.

If all the ice melted, Greenland would become a series of small islands separated by waterways.

MORE MELTING ICE
Permafrost* in the Canadian Arctic is thawing 70 years earlier than predicted, an expedition has discovered.

A team from the University of Alaska Fairbanks, US, said they were astounded* by how quickly a succession* of unusually hot summers had destabilised* the upper layers of giant subterranean* ice blocks that had been frozen solid for thousands of years.

“What we saw was amazing,” Vladimir E. Romanovsky, a professor of geophysics* at the university, told news agency Reuters. “It’s an indication that the climate is now warmer than at any time in the last 5000 or more years.”

Professor Romanovsky and his team have been flying to collect information from the remote Arctic area for more than 10 years. Their last visit to the area was in 2016 and they have been studying the data since then.

They said the landscape on their last visit was unrecognisable from the pristine* Arctic terrain* they had encountered during initial visits.

They saw an undulating* sea of waist-high depressions* and ponds known as thermokarst. Vegetation, once sparse*, had begun to flourish* in the shelter provided from the constant wind. Find some images of the landscape of Greenland. Most images will have snow and ice in them. It is one of the coldest places on Earth.

Now imagine Greenland in 50 years if the ice continues to melt at the rate that it has been in recent history. What do you imagine would happen to the landscape, climate, geography, way of life, diet and population? What major changes would or could you see?

Choose on of the images you found and draw the same scene in 50 years.

2. Extension
Photos like this make it evident that our climate is changing and that it is imperative that we take steps to reduce our impact on the environment.

Use this photo (or your own illustration of this image) on a poster and write a caption that highlights the need for us to make changes to reduce the impact we are having on climate change. Your aim is to make people take notice of this issue. You can be creative, comical or use shock tactics to make people take notice. You can also make adjustments to the picture if you need.

For example, you could draw a snorkel on the sled dogs with the caption ‘Scuba dogs will be needed if this melt continues’.

VCOP ACTIVITY
Boat Dogs are a new breed of Arctic dog that can walk on water. They have been bred in the remote areas of Greenland and the Arctic to help scientists battle climate change. Pretty cool right? Do you believe it?

No, it’s not real, but it would be pretty amazing if it was.

Pretend it is real and you have been given your own team of 8 Boat Dogs that can pull your water sleigh. Where will you go? What will you do? Write about your adventures with the boat dogs and share them with your class or in the comments section at the bottom of this story.

HAVE YOUR SAY: Should we care about melting ice and sled dogs in Greenland? Why or why not?
No one-word answers. Use full sentences to explain your thinking. No comments will be published until approved by editors.