An artist’s illustration of the hybrid HERA aeroplane. Picture: EAG

Inventors have revealed what the world’s largest commercial* hybrid* aeroplane could look like.

The 70-seater jet is powered by a mixture of eco-friendly electricity and jet fuel, and is “whisper-quiet” overhead.

And it has a total range of 1480km, which is a little over the distance from Adelaide to Sydney (1367km).

However, inventors at Bristol-based Electric Aviation Group (EAG) in the UK say improvements to battery technology could extend this to 2222km after 2030. The HERA hybrid aeroplane could be used to carry 70 passengers or cargo. Picture: EAG

Importantly, the aircraft can carry 70 passengers, which is difficult with an all-electric alternative.

That’s because bigger batteries means fewer passengers, due to the additional size and weight.

By combining a lithium-ion battery (similar to those found in smartphones and laptops and used to store power from sunlight on the International Space Station) with regular jet fuel, it’s possible to strike a balance to seat dozens of passengers.

EAG boss Kamran Iqbal said a hybrid is the best way to meet both environmental goals and make an aeroplane that is big enough to be practical.

“These small planes (that are fully electric) cannot meet the demands of mass air transportation or the requirements of decarbonisation*.” HERA would be powered by a combination of batteries and jet fuel. Picture: EAG

The HERA craft is expected to be quiet so as to reduce noise pollution by as much as 65 per cent.

And it’s claimed that the aircraft will reduce the emissions of nitrogen oxide* by as much as 90 per cent.

EAG hopes to use the aircraft to ferry passengers during the day and deliver cargo on short night flights to suit the limited range.

The aircraft is still being developed, but EAG claims to have filed 25 patents* for the design.

However, EAG’s aircraft isn’t strictly zero-emission, due to the use of traditional jet fuel. 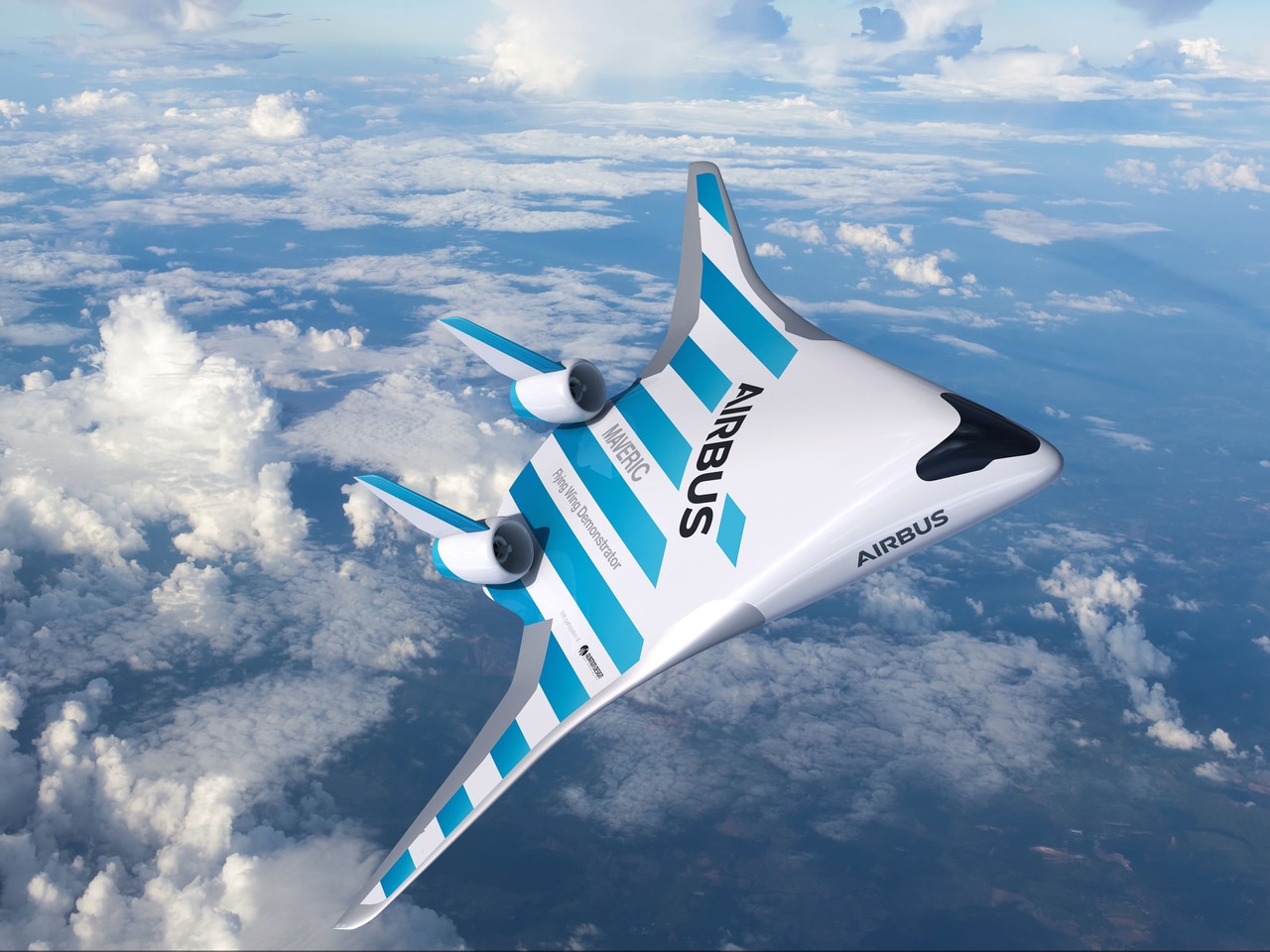 MAVERIC ON THE WAY
European company Airbus unveiled a futuristic* new design for an aeroplane at the Singapore Airshow earlier this year.

It is called Model Aircraft for Validation and Experimentation of Robust Innovate Controls, or Maveric, and looks completely different to traditional, tube-shaped aeroplanes.

The model showed how what is called a “blended-wing” design, a concept used mainly in military aircraft, would look like for commercial planes.

Airbus began the Maveric project in 2017 and began tests on a small remote-controlled version last year.

The wings would be mounted on top of the plane at the back, rather than under the wings.

Designers believe the blended-wing shape will reduce fuel consumption by allowing air to flow more freely over the plane when it is flying.

The US military uses a similar shape in its B-2 Spirit stealth-bomber aircraft. A US Air Force B-2 stealth bomber approaches a KC-135 tanker on a midair refuelling operation over Missouri, US, in 2001.

Flying cars preparing to take off in Australia

CLASSROOM ACTIVITIES
1. Paper Plane Models
Using the images of these new aeroplane designs as your inspiration, use some A4 paper to construct a paper version of these new types of planes. Then make a traditional paper plane and compare which flies better. What other design features could you suggest to save fuel?

2. Extension
Why is it important to develop these new zero-emission aircraft?

What sort of pollution do these big jets give off?

Would you make the decision to fly more or less based on the effects of the environment?

Pair up with the article between you and stand up to make it easy to demonstrate your Kung Fu Punctuation.

HAVE YOUR SAY: What kind of things would you like to design?
No one-word answers. Use full sentences to explain your thinking. No comments will be published until approved by editors.