Ben Pasternak, 19, who has been living in New York since his tech inventions became hugely successful. Picture: Wentworth Courier

A global* food company has invested millions of dollars in a recipe for non-meat nuggets invented by a teenage Australian game developer whose great-grandfather invented Twisties.

Ben Pasternak left school when he was 15 and moved from Sydney to New York in the US after a smartphone game he invented went viral*. He became famous when his games Impossible Rush and Impossible Dial became the most popular apps in the world. He also developed social messaging platform Monkey, which has 20 million users who have used it to make 20 billion calls.

No one heard much about Ben, now 19, for two years as he thought about what he wanted to do next and then began work on his plan to change the world one chicken nugget at a time.

There is no meat in his nugget recipe. Instead, Nuggs are made with what he calls texturised* pea protein. The recipe has attracted $10 million in funding, including $4.5 million from huge food company McCain.

“McCain, who is our lead investor, they sell one in three french fries on the planet, so they can open the door to anywhere we want,” Ben said. 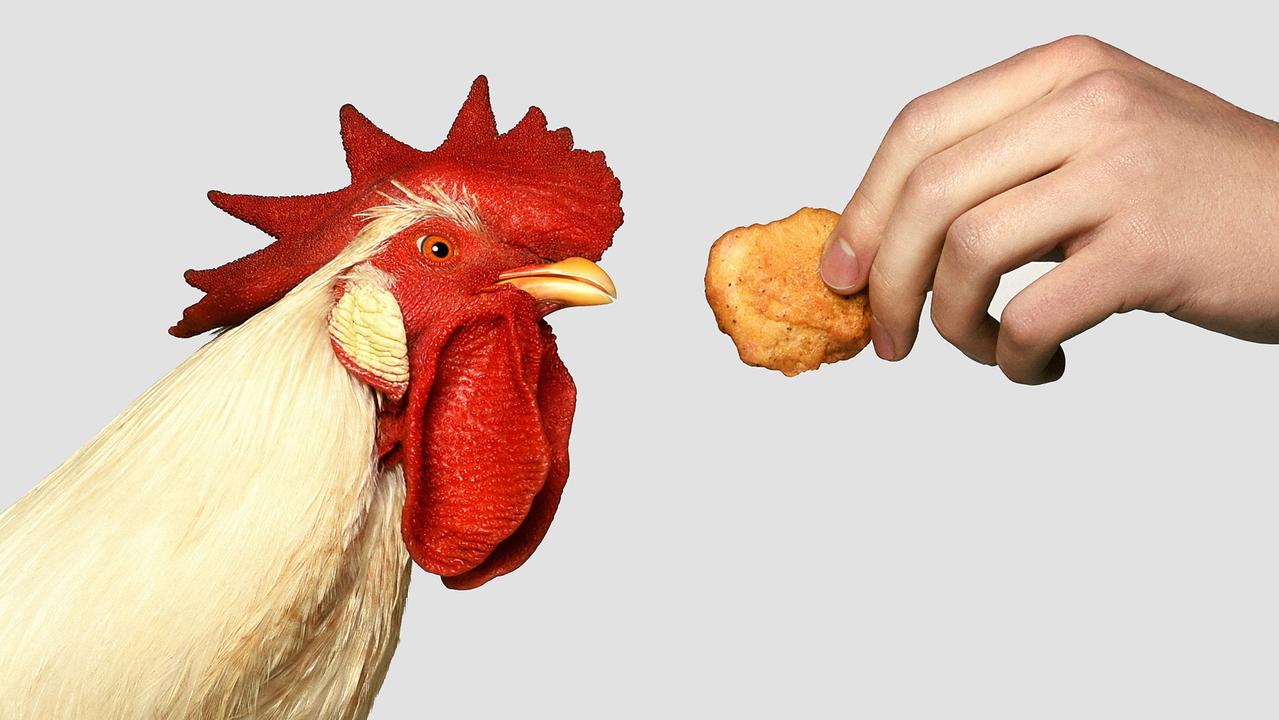 There is no chicken or any other kind of meat in Ben’s plant-based Nuggs, so even chooks would probably like eating them.

It could seem a strange next venture* for someone who started out developing games, but Ben likes nuggets and is a vegan*, so Nuggs is a solution to a problem he cares about.

“We started Nuggs because you know, I really like nuggets,” Ben said. 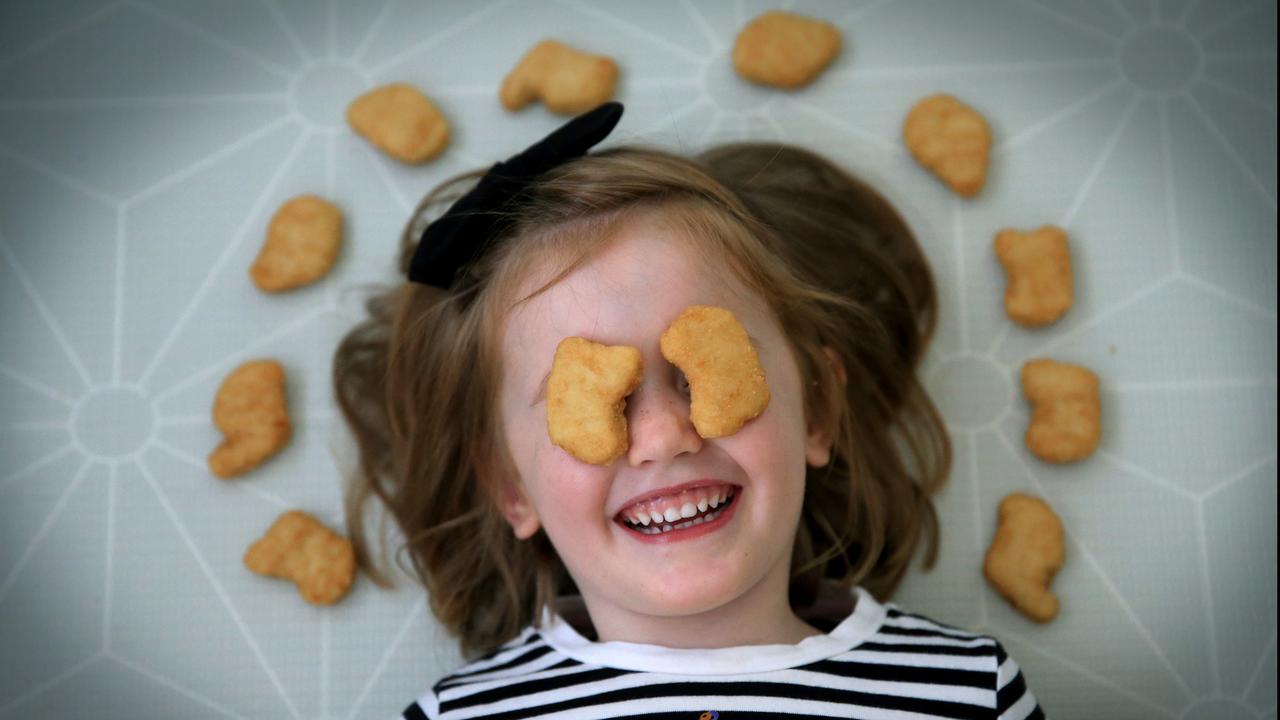 Anna with chicken nuggets. Ben and many other young people around the world really like chicken nuggets, but Ben is unhappy with how they are usually made. Picture: Jamie Hanson

Ben has combined his ability to come up with new technology ideas with a growing demand for plant-based alternatives to meat as more people become concerned about animal welfare and the environmental impact of producing meat. The Nuggs recipe even receives iPhone-style updates based on consumer* feedback.

He described Nuggs as “the biggest thing I’ve ever done”.

“The Nuggs team approach to fast, iterative* innovation*, based on constant feedback, is a great way to create products people love,” he said in a statement.

Although Ben has no food background and has a chef and food engineers* on his team, there is some family history — he said his great- grandfather Isador Madrid invented the cheese snack Twisties.

“I don’t know much about him, but in my family, they’re saying it’s funny that I’ve moved into food.”

He now lives in an apartment in New York after camping in his office.

“I lived in a tent in my office for six months, I found I was spending all my time in the office sleeping there anyway,” he said.

“It was pretty fun, I kind of loved it.

“Then I went to Australia and was at the airport coming back a couple of weeks ago and I thought ‘I need a home’. So I came straight here and leased* an apartment.” 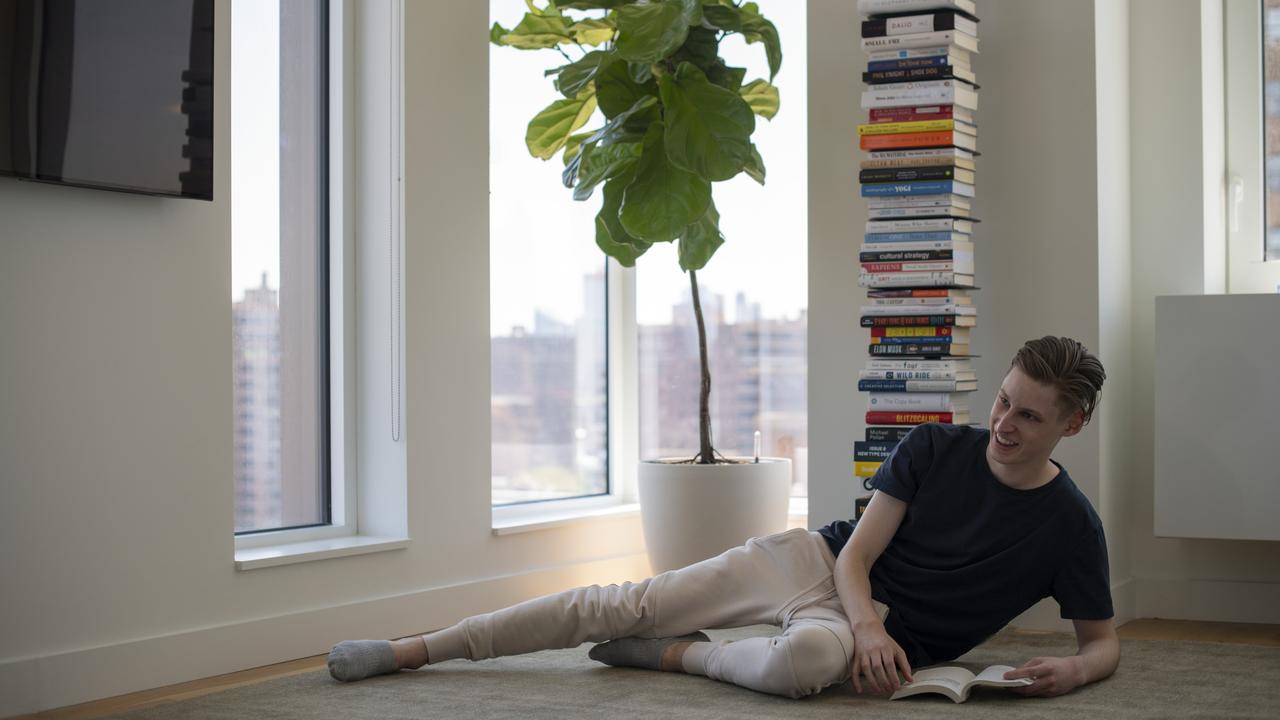 After sleeping in his office for a while because he was working so hard, Ben now has an apartment in New York to call home.

He said it was difficult to find the next project after his games and messaging platform were so successful.

“I knew I wanted to (work) on something important. And you know, people always ask the question like, what’s the meaning of life? And I think it’s whatever your framework* you come up with, it makes sense to you. And for me it was just reducing suffering as much as possible for the collective* consciousness*.”

Even though Ben is a vegan, he believes non-meat products will also appeal to meat eaters.

“I am focused on creating a brand that appeals to the masses and kind of using my tech background to implement* that.

“We’re working on something really important. That’s what matters the most. I feel very aligned with what we’re doing. And it’s exciting that we have so much support to do it.”

Laboratory-grown meat made from animal cells* is seen by many people as another possible alternative food to traditional meat.

Companies in Europe working to develop these products say they could be for sale in supermarkets for $10 for a hamburger patty within two years.

It is just six years since Dutch company Mosa Meat made lab-grown meat. The company’s experiment was expensive. At the time, people joked that they had made a $280,000 hamburger. The expensive lab-grown meat made in 2013 by Dutch company Mosa Meat.

“The burger was this expensive in 2013 because back then it was novel* science and we were producing at very small scale. Once production is scaled up*, we project the cost of producing a hamburger will be around 9 euros ($10),” a Mosa Meat spokeswoman told news agency Reuters, adding that it could eventually become even cheaper than a regular hamburger.

People concerned about climate change, animal welfare and their own health are driving interest in alternatives to traditional meat-based foods, which some call clean meat.

Some people believe cultured or lab-grown meat will have less environmental impact than traditional meat because it could take less energy and water to make. Other people believe it will only have a lesser environmental cost if the energy comes from renewable sources such as solar or wind.

To make cultured meat, stem cells* from the muscle (meat) of an animal are placed in a culture medium* that is then put in a bioreactor* — similar to those used for fermentation of beer and yoghurt — to support growth of new strands of muscle tissue.

CLASSROOM ACTIVITIES
1. Create a new food
If you could create a new type of food like Ben, what would it be? Describe your new food item, write an explanation of why you think it would be popular and give it a catchy name.

2. Extension
Create an advertising campaign for your new food. Write a statement that describes who the audience for your campaign is. Design a poster, magazine or web page advertisement and a script for a TV, radio or online advertisement. Include words and perhaps the music for a jingle (a short catchy song used in an ad).

HAVE YOUR SAY: Would you eat Nuggs? Would you eat lab-grown meat? Why or why not?
No one-word answers. Use full sentences to explain your thinking. No comments will be published until approved by editors.