ONE third of preschool children have their own tablet or smartphone, and one sixth of primary school pupils have their own social media account according to a new poll.

The findings from the Australian Child Health Poll, run by the Royal Children’s Hospital, found half of children used screen-based devices at bedtime, despite evidence showing use can affect sleep quality.

Teenagers who use screens in bed are also more likely to experience online bullying.

The April-May survey of more than 1970 parents of nearly 4000 children found that children’s regular use of screen devices was well in excess of national guideline recommendations. iPads at the library. Picture: supplied

And half of toddlers used devices without supervision*.

“We’re past the point of saying: put the screens away.

“We need to do that some of the time, but screens are part of modern family life, and part of education,” she said. “The solutions will require a whole-of-family approach.”

The survey also found children’s screen use mirrored* their parents’: parents who were heavy users were more likely to have a child who used screen devices heavily.

“Every hour a child spends using a screen-based device is an hour they’re not doing something else, like interacting face-to-face or physically playing these things in real time and space,” Dr Rhodes said. Isobel telling her mum Virginia to get off the phone. Picture Rebecca Michael

Teenagers are spending almost 44 hours, outside school hours, on screen-based devices — more than they would spend in a full-time job.

Mother of three Imogen Lewis said she downloaded educational apps on the family’s iPads for three-year-old son Louis when she needed to get housework done or feed her six-month-old child.

“I do use the ‘digital babysitter’, but overall I’m pretty strict with screen time,” Ms Lewis said.

“With the TV, the iPad and iPhone, collectively they add up pretty quickly. 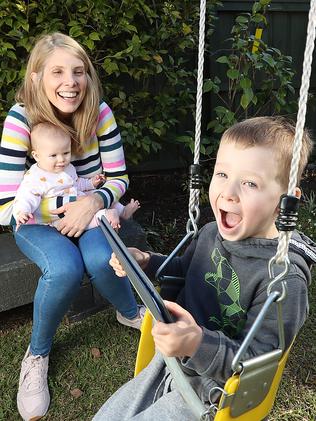 Imogen, Evie and Louie with tech on the swing. Picture: Alex Coppel

“If I give him my phone when we’re out, to occupy him, I’ve got to remember later that day he’s already had the phone,” she said.

supervision: being watched by an older

The first line of the article tells us that the poll found that “a third of preschool children have their own tablet or smartphone, and a sixth of primary school pupils have their own social media account.”

Draw a picture to show your answer by drawing the outlines of the total number of people and colouring only those who have their own device or account.

Come up with your own survey question about screen time and ask your classmates.

Draw a picture or graph to display your result.

Activity 2. What else can we do?

Have a brainstorming race against a friend to see who can come up with the most ideas in 10 minutes of what to do instead of screen related activities.
They could be sporty activities, creative activities, noisy activities, outdoor activities, whatever you want… as long as they don’t involve screens!

Choose your favourite activity idea and write down all of the things you enjoy about doing it.

Using a deck of cards, play with a partner and a small group.
You will need cards numbered 1-10.

When you flip a card, the other player(s) have 30 seconds to formulate an argument for or against why “children are spending too much time with a screen in front of them.”
All they must do is come up with a reason why they agree or disagree.

After the player has given their reason, swap roles and continue and all cards have been flipped.

You do not need to write anything down, instead focus on saying it to your partner.

Extension:
Can you give some supporting evidence to back up your reason or argument with just 30 seconds?

APPLE COULD BE GOOD FOR DIABETES

ARE YOU GETTING ENOUGH SLEEP?

WHEN TO WALK ALONE?