A woman looks at pieces of art alongside remote-view robots that visitors can digitally control to explore the exhibition remotely during a press preview of 'Philip Colbert: Lobsteropolis' at the Saatchi Gallery in London on October 29, 2020. Picture: AFP

A UK art gallery is holding a private viewing for robots and humans, allowing people and machines to wander through an exhibition together.

Telepresence robots — remote-controlled robots on wheels with cameras and a tablet screen — are on offer for those who don’t attend in person.

Real and virtual visitors to Saatchi gallery in Chelsea, London, will experience the wacky world of pop artist Philip Colbert in a show designed to work both digitally and in real life.

The show displays work featuring Colbert’s cartoon lobster, the central character in his paintings and sculptures.

“I wanted to stage my exhibition opening using these telepresence robots as almost like a sci-fi vision of a possible future, where we have a telepresence robot which goes out into the world for us so we stay protected at home,” Mr Colbert said.

“I felt that that was not only a way of making the show more accessible but also creating a more fantastical* vision of the future … it is very possible that people could be physically required to be present and are not able (to be), so hence* they have a robot presence somehow,” he said. 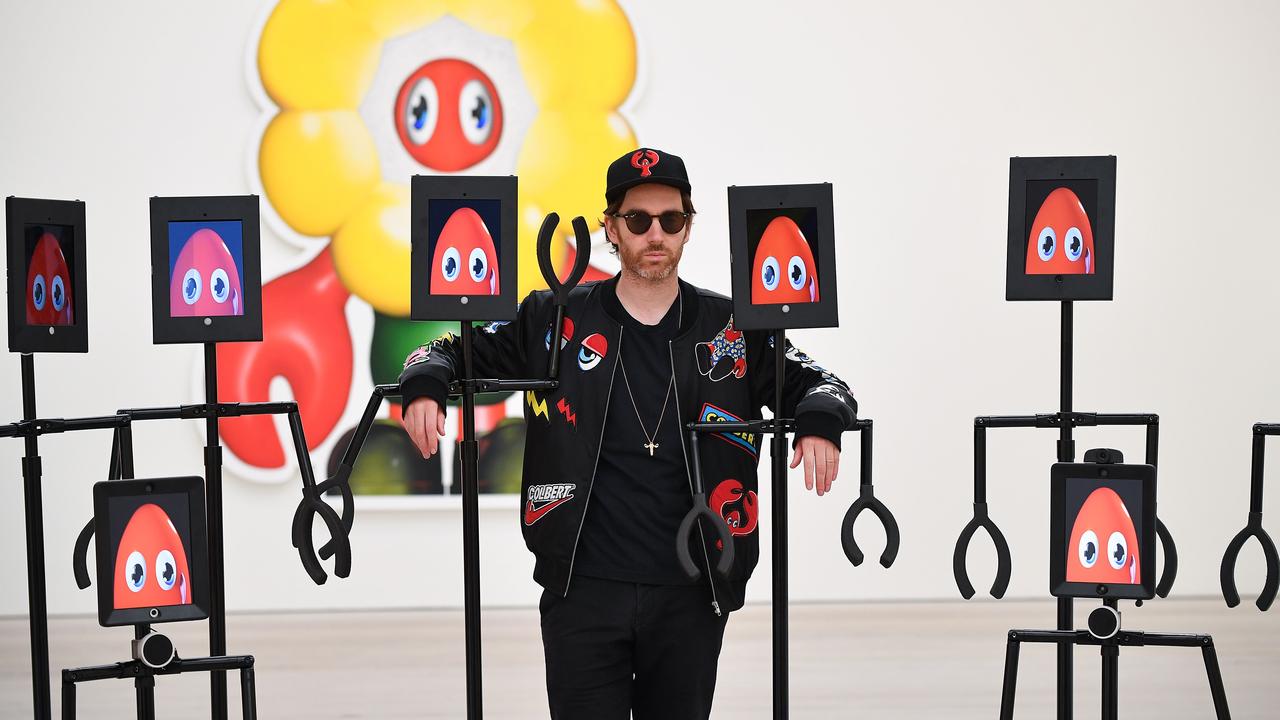 Guests can tour the gallery in person or by booking a robot they can then navigate through the space, zooming in and out on works exploring mass consumerism*, contemporary culture and history.

“It’s quite incredible to be driving round Saatchi,” said Josh Corden, an artist and preview invitee*. “I think it’s incredibly powerful,” he said from East London, several suburbs away from the gallery.

The idea for the show was born during lockdown isolation.

Auctioneer Simon de Pury attended the show through a telepresence robot that he controlled from his home in Monaco.

“This is a wonderful way of attending an auction preview or an exhibition preview. You can get close up to the artwork, you can have a look at it from near, from far and you get an idea of proportion so it’s a pretty cool way of looking at art.” A visitor poses a robot in front of an artwork that is part of the ‘Philip Colbert: Lobsteropolis’ exhibition at the Saatchi Gallery in London, UK. Picture: AFP

ROBOT’S CRY FOR HELP
Meanwhile*, in Germany, a lawnmower robot’s electronic cries for help foiled* a thief’s plan to make off with the grass-cutting automaton*.

Police said that a homeowner in the western German town of Lippstadt was surprised on Tuesday evening last week with a smartphone message from the robot that it had flipped upside down.

When he went outside to the lawn to check on the device, he spotted a thief with the robot tucked under his arm.

Caught in the act, the thief dropped the robot and fled, according to police.

Officers searched the area but did not locate a suspect. Police are calling for any possible witnesses to come forward.

There was no word on whether the robot suffered damage in the incident.

CLASSROOM ACTIVITIES
1. Artist’s Impression
Draw a scene from the opening night of the Lobsteropolis exhibition. What do you imagine it would look like with robots as well as humans roaming around the gallery? Remember to include some pictures of Philip Colbert’s art displayed in the gallery. (You may need to research some images of his work).

Write a short (imagined) report about the evening to accompany the scene you drew. Imagine you were in attendance, describe the atmosphere, the sounds, and what you could see. You might like to make a comparison to an exhibition that could only be attended in person.

2. Extension
Create a flyer to advertise the Lobsteropolis exhibition. Include who the artist is, his style of art, where the exhibition will be held, how else it can be accessed and why there is the option to attend digitally.

Try to include some catchy and engaging language to encourage people to attend or view the exhibition digitally.

VCOP ACTIVITY
Virtual Possibilities
The article explains some of the benefits of being able to control your own robot to view the art exhibition. What other uses could having your own virtual viewing robot be? How is it a benefit? Can you see any negatives to the camera robots?

If you could ask for one of these robots for Christmas, would you upgrade any features to allow more capabilities? What would you add?

Use you VCOP skills to persuade Santa to bring you a virtual viewing robot for Christmas.

HAVE YOUR SAY: Would you prefer to attend an event in person or via a robot? Why?
No one-word answers. Use full sentences to explain your thinking. No comments will be published until approved by editors.