Car maker Porsche has developed a new type of robot with skin that can feel when a human is close by.

The robot slows when it senses it’s close to a person and stops if they touch.

Car-making robots are powerful and dangerous machines, so there are always safety barriers separating them from factory workers. Porsche’s new generation of robot can work side-by-side with humans. It’s a car-industry first, according to Porsche’s Jens Thomer.

“People and robots will co-operate,” Mr Thomer said of the new robot that will work to build car bodies in Porsche’s main factory at Zuffenhausen, near Stuttgart, Germany. 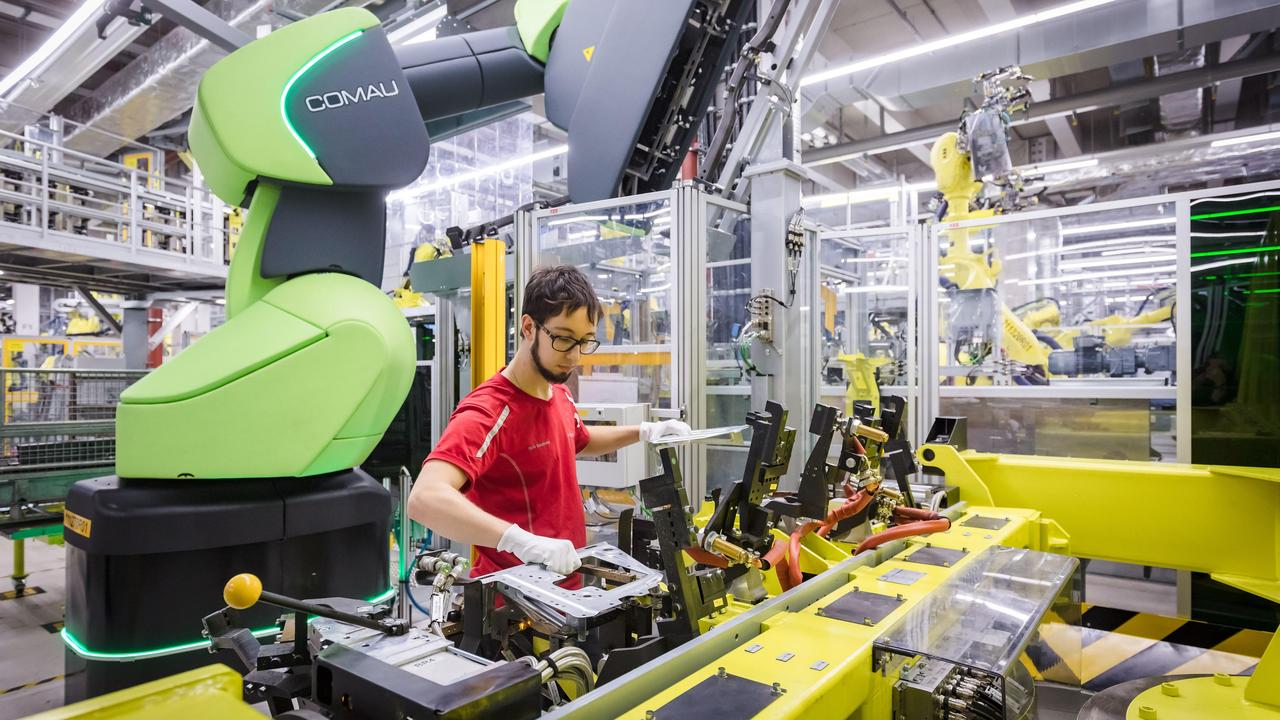 A Porsche car assembly robot working side-by-side with a human in the 911 assembly plant in Germany. Picture: supplied

The new robot’s metal muscles wear a sensitive skin that uses a technology called capacitive sensing, which can feel anything different to air. Capacitive sensing is used on smartphone, tablet and car touchscreens. The technology used for the human-sensing robot is similar to what is used on touchscreens to recognise our fingers.

While the robot handles heavy lifting, at the same time its human workmate can take on tasks that demand dexterity*, flexibility and intelligence.

The first job for the sensitive-skin robot will be helping assemble the rear floor section of the body of Porsche’s new 911 sports car.

“Just one (work) station, for now,” said Mr Thomer, but the technology is sure to be used more widely across the Porsche factory soon.

The Zuffenhausen factory, which is preparing to produce Porsche’s new battery-powered super-sedan, the Taycan, alongside the 911, Cayman and Boxster sports cars, is a crowded place. It’s in the middle of town, with limited room to expand.

But Porsche plans to increase both car production and workforce* size at Zuffenhausen, where there are already 280 conventional* robots installed. Car factories already use robots for many tasks but humans have to well clear for safety. These robots are welding.

Robots and humans sharing the same workplace is a better way to use the factory’s limited space. It can also cut the time spent at a workstation, which is important for efficiency*.

Robot dog has a new trick

Your new teacher could be a robot

CLASSROOM ACTIVITIES
1. Helping Hands
Divide a blank page into two columns, one headed DANGERS and the other ADVANTAGES. List the dangers and advantages of these wonderful car-making robots.

With a partner, discuss your lists and for both of your lists, decide who they are an advantage or a danger for and which are the most important of each.

2. Extension
What other things could this new skin-sensing technology on robots be used for?

HAVE YOUR SAY: If you could design a robot to be beside you in the classroom and the playground, what would you want it to be able to do for you?
No one-word answers. Use full sentences to explain your thinking.