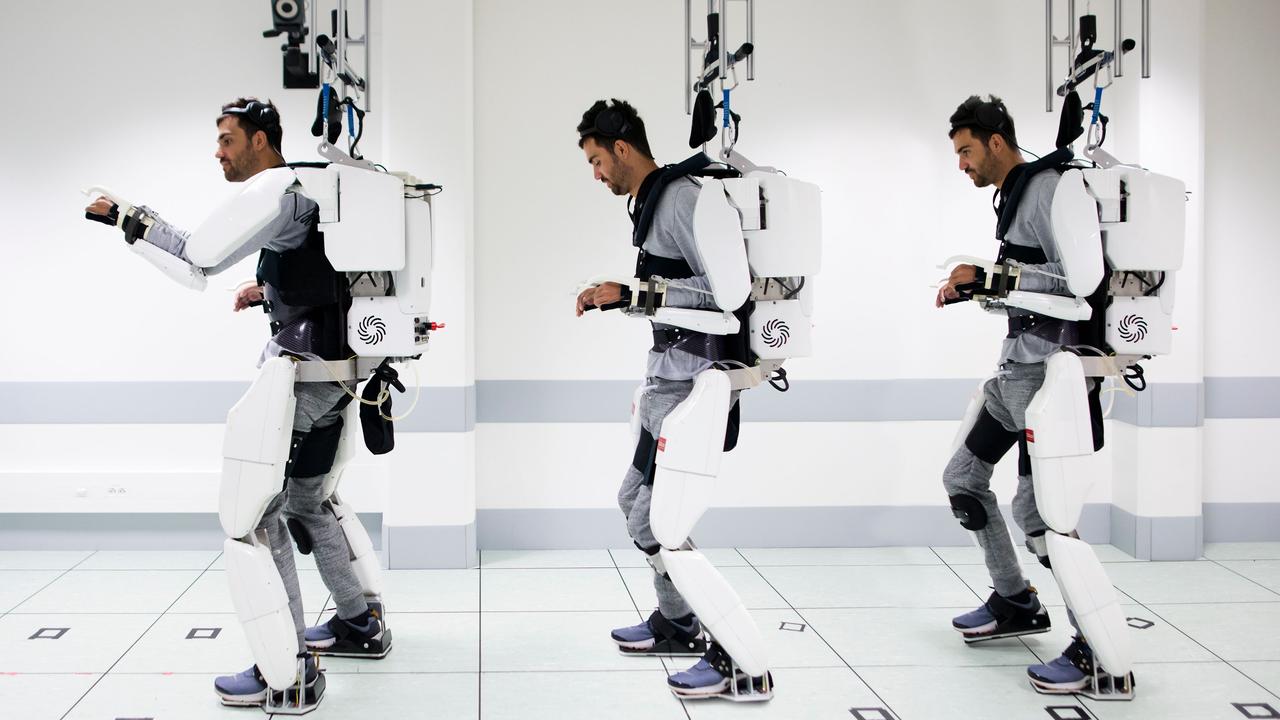 This combination of photos shows the quadriplegic man standing, walking and moving his arm while wearing the exoskeleton at The University of Grenoble, France. Picture: AFP/Clinatec Endowment Fund

A man paralysed from the shoulders down has walked using a four-limb robotic exoskeleton* controlled by signals from his brain.

With a ceiling-mounted harness for balance, the 28-year-old quadriplegic* patient used a system of sensors implanted near his brain to send messages to move all four of his paralysed limbs after a two-year trial of the whole-body exoskeleton.

The results, published in The Lancet Neurology journal, bring doctors a step closer to one day being able to help paralysed patients drive computers using brain signals alone, according to researchers who led the work. The French quadriplegic man, referred to only as ‘Thibault’, wearing the exoskeleton. He became paralysed four years ago after a fall from a balcony. Picture: AFP/Cinatec Endowment Fund

But for now the exoskeleton is an experimental prototype* and is still a long way from being widely available, they added.

“(This) is the first semi-invasive wireless brain-computer system designed … to activate all four limbs,” said Alim-Louis Benabid, a neurosurgeon* and professor at the University of Grenoble, France, who co-led the trial.

He said previous brain-computer technologies have used invasive* sensors implanted in the brain, where they can be more dangerous and often stop working. Previous versions have also been connected to wires, he said, or have been limited to creating movement in just one limb.

In this trial, two recording devices were implanted, one either side of the patient’s head between the brain and the skin, spanning the part of the brain that controls sensation* and motor* function. A French scientist holds an implant that is put between the brain and skin and reads the area of the brain that controls movement. Picture: AFP/Clinatec Endowement Fund

Each recorder contained 64 electrodes*. The electrodes collected brain signals and sent them to a decoder. This translated the signals into the movements the patient thought about and sent them as commands to the exoskeleton.

Over 24 months, the patient carried out various mental tasks to train the decoder to understand his thoughts and to progressively* increase the number of movements he could make.

Commenting on the results, Tom Shakespeare, a professor at the London School of Hygiene and Tropical Medicine in the UK, said it was “a welcome and exciting advance” but added that it was still a long way from being widely available.

“A danger of hype* always exists in this field. Even if ever workable, cost constraints mean that hi-tech options are never going to be available to most people in the world with spinal cord injury,” he said. Paralysed since a fall four years ago, ‘Thibault’ now manages to direct the movements of an exoskeleton by thought. Picture: AFP/Clinatec Endowment Fund

Is your brain playing tricks on you?

CLASSROOM ACTIVITIES
1. Draw a diagram
What an impressive use of robot technology. This exoskeleton involves a complicated system to help quadriplegic patients to use their limbs again. Sometimes it is easier to understand how something works by looking at a diagram, rather than reading a paragraph about it.

Draw a diagram of this exoskeleton attached to a person. Read through the article carefully and label your diagram with simple statements showing how the system works. You will need to show where the sensors are implanted and how the messages travel from the brain to make the limbs move.

2. Extension
The researchers from this project have warned that the technology is a long way from being widely available. After watching the video and reading about the exoskeleton, what adjustments do you think will need to be made to make this technology practical for quadriplegics to be able to move their limbs to complete everyday tasks.

Make a list of adjustments you deem necessary and why.

For example: Needs to be free-standing as you cannot connect to a ceiling everywhere you go.

VCOP ACTIVITY
Headline Act
A headline is the first bit of text the audience sees. It’s designed to capture their attention and draw them in so they read the whole piece.

Create three new audience-capturing headlines for this article. Use Ollie Opener to help you.

Share with a partner and vote on which one is your favourite and why.

HAVE YOUR SAY: Describe some of the emotions you think the man felt during the exoskeleton experiment. Would you volunteer for this experiment if you were paralysed?
No one-word answers. Use full sentences to explain your thinking. No comments will be published until approved by editors.