Next time you go to hospital or the doctor, look out for a robot named Pepper helping out 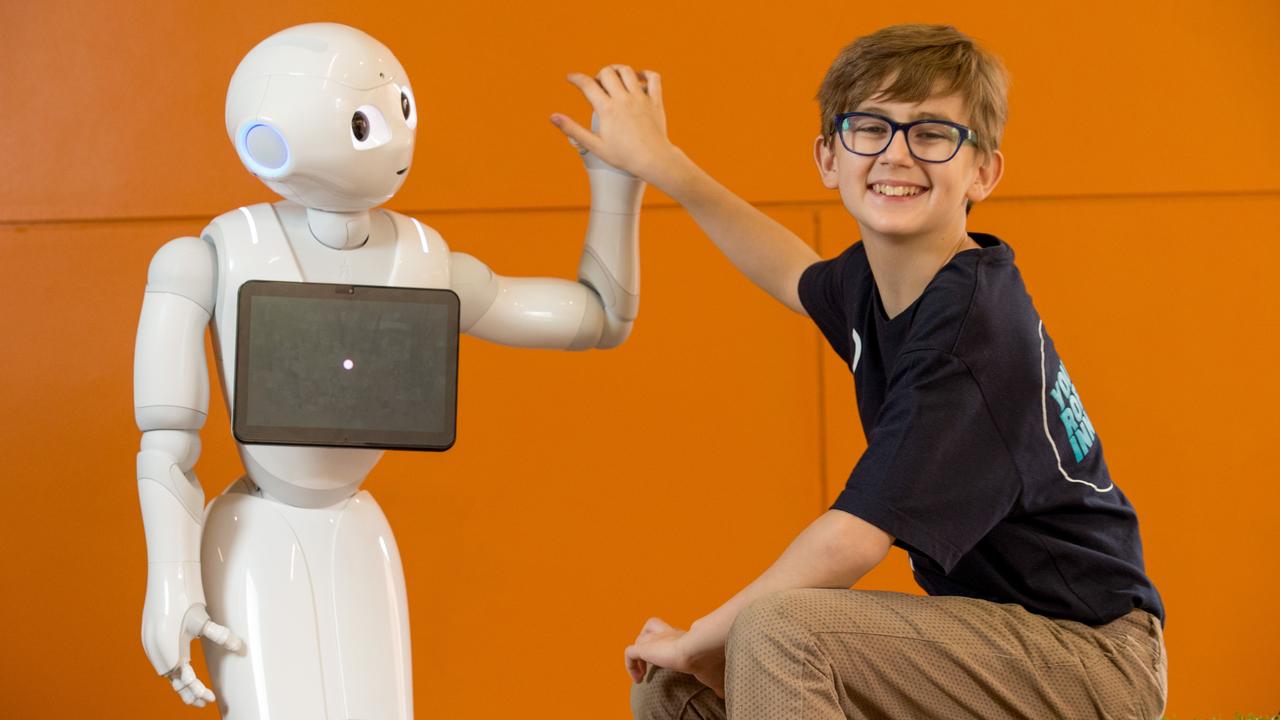 Ruben getting a high-five from Pepper at Queensland University of Technology. Picture: AAP

Get ready for robots interviewing you when you go to hospital or the doctor, offering health advice and even criticising your bad health habits.

Trials are underway in hospitals and clinics around the world, including Australia.

These robots can have a conversation and connect with you emotionally*, using eye contact and sensors to judge your mood.

They cost tens of thousands of dollars but, with mass production, robots will become more affordable and in the end, probably cheaper than employing humans to do those jobs.

Conducting a health survey with a new patient, answering routine questions such as where to buy a coffee or where visitors can park, and providing information about stopping smoking, avoiding the flu and improving nutrition soak up the time of health professionals. A social robot can relieve a nurse of some of these duties.

In Australia, the ARC Centre of Excellence for Robotic Vision has been trialling social robots at Townsville Hospital, Queensland and at Queensland University of Technology.

In July and August last year, Pepper was placed in the corner of a 16-bed emergency ward.

“We had her stand as a concierge*. The robot answered questions that nurses frequently were asked but didn’t have time to answer … Things like: How do I get a coffee? How do I get out of here? Where are the exits? How do I pay for parking?” said Ms Elvin. 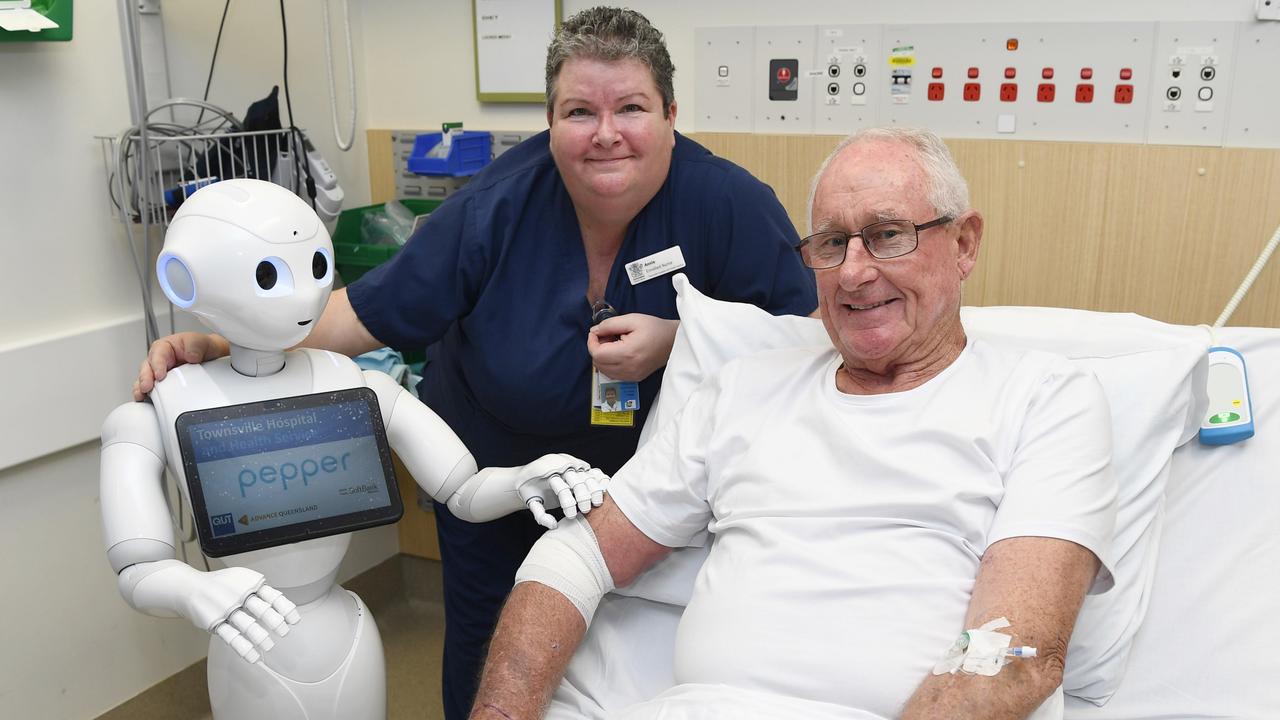 The robot was fixed and couldn’t move, for safety reasons. Trigger zones were set up so Pepper noticed people walking by and greeted them. The robot’s software did not access Wi-Fi, to avoid it being hacked.

“People would ask: ‘Where can I get a smoke?’, and Pepper would respond with: ‘Smoking is not allowed on the Townsville hospital campus.’ She would also then go into a spiel* about how you can quit smoking while you’re here.”

The robot was in the hospital’s main foyer from September to December, programmed to ask people about whether they had a flu shot, their attitudes towards vaccination and washing their hands to avoid disease. People replied using Pepper’s touch screen and their responses were collected. The robot would offer advice on these.

“We saw potential in seeing clients that were proactive in their own health and wanting to get information from a source they could readily approach without having to make an appointment.

“We found clients who were happy to talk to a robot for extended periods because they trusted the information being given by the machine. They accepted criticism by robots.”

Separate trials took place at QUT. For about four months, people could book an appointment with Pepper to do a health survey that was passed to their health professional, QUT Health Clinics manager Lisa Morgan said. The survey included information about sleeping habits, diet and activity. Patients were given a printout of collected data. Social robots also can relieve some of the pressures health centres experience.

Hospital robots are likely to be used for casual conversation and act as company for the young and elderly.

“I can see this being used with young children as a way to engage them in healthcare practice, doing it in a way that’s really fun and interactive for them. The sky’s the limit on what a robot could potentially be programmed to do in future,” said Nicole Robinson, a researcher at Australian Centre for Robotic Vision.

“If you’re not feeling comfortable enough to speak to someone in person, you might potentially feel a bit more comfortable talking to a robot.

“In rehabilitation*, you could have a robot train with you, alongside you, as you’re doing the techniques. It’s a coach, a therapist, a companion, a rehearsal tool.

“Computer vision in robots might monitor if people are taking their medication, if they are in distress or had fallen over, or in the wrong area of a hospital ward.”

“We will never see a doctorless hospital, we need doctors, and we need nurses to care for people.” Dr Nicole Robinson, an expert on social robots and healthcare, with Pepper the robot at QUT. Picture: Peter Wallis

More than 2000 companies around the world are using Pepper to answer questions and offer information in shopping centres, foyers, banks, schools, universities and homes.

Pepper communicates by speech and via a touchscreen in 15 languages. It has a head with 20 degrees of freedom to mimic natural movement, a “perception module” for interacting with others, and touch sensors, LEDs, microphones, infra-red sensors, bumpers, an inertial* unit, 2D and 3D cameras, and sonars*.

Pepper is programmable, so it can be adapted to different tasks and environments.

The Emotional Robot Pepper at WSJDLive

PEPPER AT PARTIES
A team from University of Technology Sydney, NSW, won the @Home section of the international RoboCup19 in July for programming the humanoid robot Pepper.

The team, part of the university’s Magic Lab social robotics centre, programmed the robot to work as a party host to meet and greet guests and make introductions; as a housekeeper, cleaning up and taking away rubbish; and as a waiter, taking orders in an unfamiliar environment with unknown people.

Robots with skin can sense humans nearby

CLASSROOM ACTIVITIES
1. Benefits and Limitations
The article explains how having a robot work in hospitals provides lots of benefits.

Read through the article to find all the positive benefits of having a robot on staff in the hospital.

Write these in the appropriate column of a two-column chart labelled BENEFITS and LIMITATIONS.

After looking at both the benefits and limitations would you support introducing robots at your local hospital? What role would you give them? Write your response in a short paragraph, providing reasons for your opinion.

2. Extension
The article says more than 2000 companies are using Pepper to answer questions in various locations, including schools.

Do you want a Pepper at your school?

Think of a role Pepper could fulfil at your school. Would she/he be helpful in the office? In the playground? In your classroom?

Write a sales pitch to encourage your principal or school council to look into purchasing a robot for your school. Make sure in your pitch you include what role you think the robot could have and give reasons why it would be beneficial. Consider some of the limitations you thought of in the first activity and think of ways you can account for or counteract these.

VCOP ACTIVITY
Interview with a robot
The article talks about the robots interviewing humans as part of medical services, but first you might have a few questions for Pepper.

Come up with a list of 10 questions you would like to ask Pepper to see what she can answer.

HAVE YOUR SAY: Would you be okay with Pepper helping you out with your health or at home? What would you like or not like Pepper to do for you?
No one-word answers. Use full sentences to explain your thinking. No comments will be published until approved by editors.