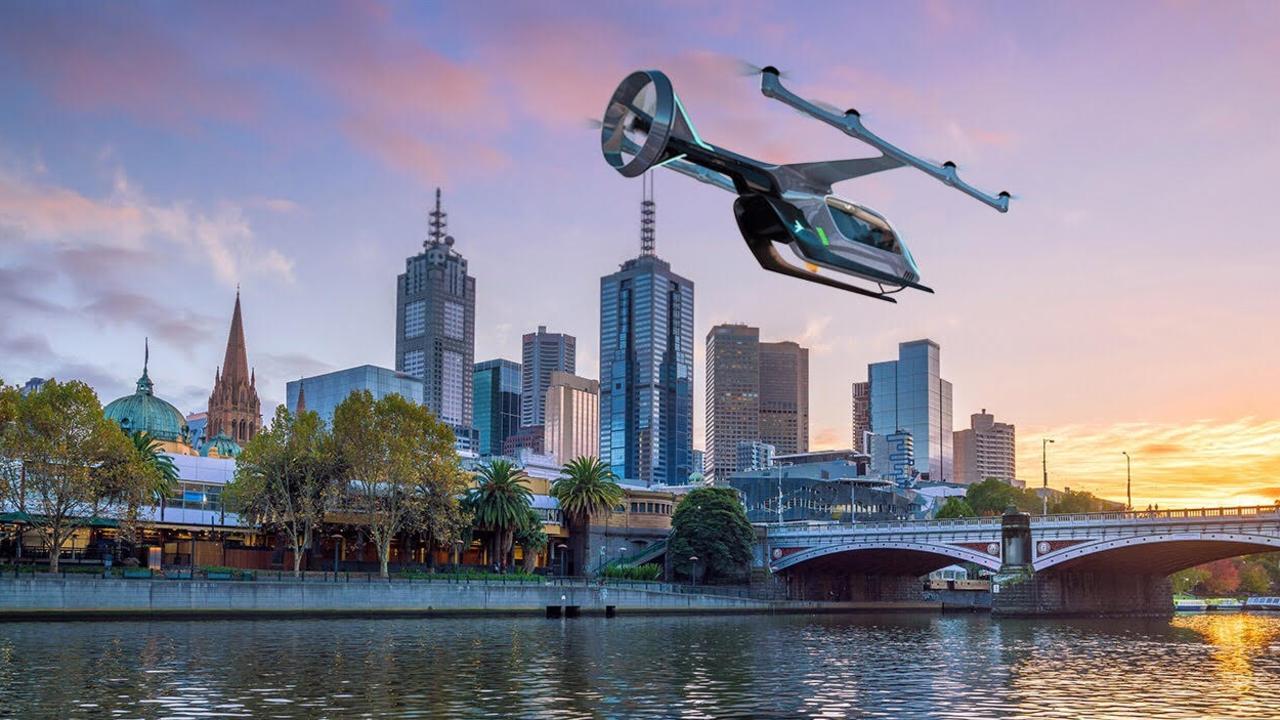 An artist’s impression of an Uber Air aircraft flying over Melbourne. Picture: supplied

Flying cars will zoom around Melbourne from next year.

The Australian city won a global competition to host the first international base for Uber flying cars.

Melbourne, Victoria, will become one of just three cities worldwide to host the ambitious transport venture* that will let passengers hail* an aircraft from a smartphone app and fly to their destinations for the cost of a car ride. Uber hasn’t yet chosen aircraft, but needs them to be quiet enough to fly over houses, must take off vertically and be more like drones than helicopters or aeroplanes. Picture: supplied

Test flights are expected to begin in Melbourne next year before a commercial launch in 2023.

And the project could become still more futuristic* after its launch, with Uber planning to later remove pilots and have its aircraft fly autonomously*.

Uber Australia and New Zealand general manager Susan Anderson said the company picked Melbourne as it was “confident” it could work with Australian federal, state and local governments, safety authorities, and property groups to deliver the service. Uber will work with government, safety authorities and property companies to set up its flying ride service, which will require landing pads for the aircraft. Picture: supplied

“This is a win for Australia and I think it reflects the fact that this is one of the most forward-thinking countries in the world,” she said.

“Some of the things we were looking for were regulators* that we could work with and would help us build it, and a population who would embrace this enterprise.”

As part of the venture, Uber has partnered with Australian companies including Melbourne Airport, Telstra, Scentre Group, and Macquarie Group to develop launch pads around the city, dubbed Skyports, as well as a connected air traffic system.

Ms Anderson said the route between Melbourne’s Tullamarine Airport and the city would be one of the first targeted by UberAir, as the 19km ride could be cut from one hour on the road to just 10 minutes in the air.

Future routes could include travel from Geelong to the city, with the journey taking 14 minutes by air, but Ms Anderson said Uber would expand the project to other Australian cities as soon as it made sense to do so. “When we look at the growth that’s come into Australia over the past few years, we need alternative traffic solutions,” she said.

“Once we have regulations in place, we’re keen to make this available in as many places as possible.”

But Uber will have to overcome several hurdles before launching its air service in Australia, such as choosing a vertical take-off-and-landing (VTOL) aircraft, having the vehicles certified* by the Civil Aviation and Safety Authority*, getting approval for air routes, and putting in place safety measures to avoid other low-altitude aircraft and drones.

CASA spokesman Peter Gibson said it had held initial talks with Uber but there was still “a lot of safety work to be done” before Uber Air was ready for takeoff.

“It is cutting-edge* stuff. It’s a world first for aviation,” he said.

“At the same time, what they’ve got to do is not a million miles away from if someone wanted to start up a new airline tomorrow. It’s the same sort of process.” Mr Gibson said Uber Air’s timetable of a commercial launch by 2023 was “not impossible” but the company would need to do more to operate aircraft autonomously in Australian air space.

“The aim is for these things to fly themselves but, of course, they won’t be doing that from day one,” he said. “Uber fully recognise they have to have people monitoring* the systems for quite a while to prove they can operate safely before they move to full autonomous mode.”

Melbourne will join Dallas and Los Angeles, both US cities, as test sites for Uber’s latest venture, and Ms Anderson said even though the Australian launch site “started the process slightly later,” the company was still aiming to hold test flights next year.

Aircraft will need landing pads at a base and at a destination, such as at Melbourne Airport. Picture: supplied

Uber would also “work towards” delivering flights for the same cost as its luxury offering, Uber Black, on a per-kilometre basis, she said. That could mean a flight from Melbourne city to the airport would cost just $86.

“A key aim for us is we want this to not be something for the elite*, super wealthy but something that is accessible for a large portion of the population,” she said.

The Uber Air announcement comes on the back of the company’s launch of a ride-sharing submarine, dubbed scUber, on Queensland’s Great Barrier Reef.

Jennifer Dudley-Nicholson travelled to the US as a guest of Uber. Uber wants to fly you to school

Driving jobs for the blind within reach

CLASSROOM ACTIVITIES
1. Uber Air
Think about your family and their travel needs. What sort of trips do you think your mum or dad might like to use Uber Air for?

Now work with a partner and think about other people and families you know. What sort of trips do you think they might like to use Uber Air for?

Do you think the cost of Uber Air mentioned in the article is affordable to normal families and people?

What suggestions do you have for the Australian testers setting up Uber Air (what would you like to see as part of their service?)

2. Extension
Make a list of some of the safety considerations the Australian testers of this new Uber service will have to consider before launching test flights next year. See if you can come up with any solutions to these.

HAVE YOUR SAY: Would you choose to travel in a flying car? Why or why not?
No one-word answers. Use full sentences to explain your thinking. No comments will be published until approved by editors.