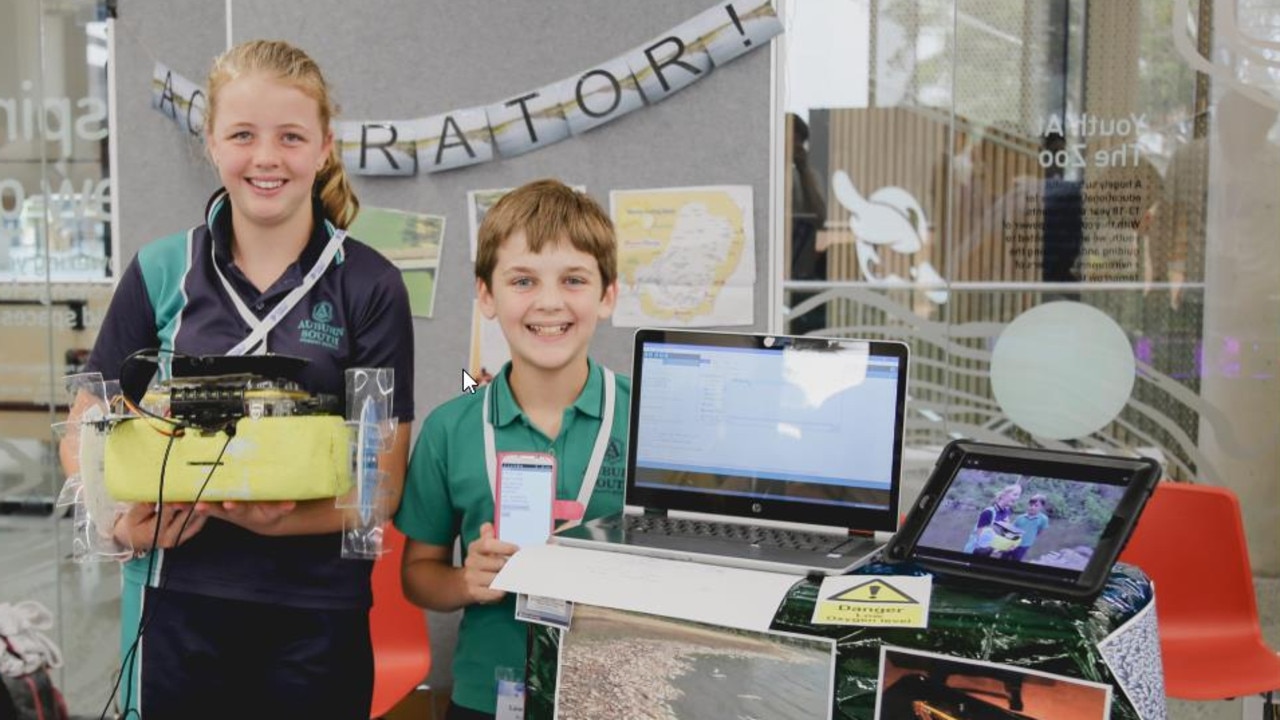 Lawson and Gabrielle with their winning invention, the Aquerator. Picture: supplied

A robotic aerator to save the lives of river fish, a voice app to help people living with dementia* and a photo-recognition app that sorts rubbish have been named Australia’s top student inventions.

The three inventions are by the national winners of the 2019 SAP Young ICT Explorers (YICTE) competition, open to students in years 3-12 across the country.

This year, more than 1200 kids from across Australia entered.

The competition organisers called the students and their inventions “inspirational”.

“Not only are they trying to solve some incredibly difficult issues from dementia to climate change, they also demonstrate an impressive array* of skills like coding, robotics and engineering,” said Pete Andrew of technology company SAP.

“These are exactly the types of skills that will be essential for the workforce* of the future.”

Along with SAP, the program is supported by several universities including UNSW, Deakin University, Queensland University, University of South Australia, and James Cook University, as well as CSIRO, the Australian Computer Society and The Smith Family charity.

MEET THE WINNING INVENTORS
MemoryBuddy
Lucas Buchanan, 11, of Bondi Public School, NSW, is the national winner in the year 3-4 category for his MemoryBuddy, a voice app designed to help people living with dementia or Alzheimer’s.

The app has two parts: one is a portal* carers can use to input care plans and the other is a voice-activated app people with dementia can use to access the care plans, get reminders on day-to-day tasks and ask questions. The app can also ‘introduce’ people, for example family members, to help individuals with dementia recognise who they are speaking to. Lucas Buchanan with a display explaining his winning invention, MemoryBuddy, which aims to help people living with dementia. Picture: supplied

Lucas was inspired by his grandfather, who lives with dementia. The app uses smart speakers, such as Google Home.

He said the biggest challenge was the number of steps required to move from the initial idea, through solving problems to the finished product.

“I had to go through a lot of different steps to prototype* it, for example starting on paper then making it more advanced,” Lucas said.

“Also troubleshooting when it stopped working or if the app crashed is always hard.”

Lucas aims to keep developing the MemoryBuddy and, after school and university study, continue to solve more problems with technology.

Aquerator
Lawson Gallup and Gabrielle Simcox, both 13, of Auburn South Primary School, Victoria, were inspired to create the Aquerator when they saw upsetting photos of masses of dead fish in the Murray-Darling Basin river system in NSW last summer. Many fish died last summer in the Murray-Darling Basin because of stagnant water. Photos like this one upset Lawson and Gabrielle and inspired them to find a solution. Picture: Facebook https://www.facebook.com/groups/1560535094179073/photos/

The Aquerator, which is solar-powered, moves through a stagnant* river, both detecting algal* blooms* (which happen when oxygen levels decrease) and aerating* the water so there is oxygen for the fish.

Lawson and Gabrielle both enjoyed the invention process.

Lawson: “I loved all of it. Seeing it come from nothing and become the solution we wanted it to be was incredible. And working together with Gabby (Gabrielle).”

Gabrielle: “I quite enjoyed creating the sketches, laying it all out and then building it.”

It wasn’t all smooth sailing, however.

Lawson: “The coding was really complicated, over 1200 lines (of code), so getting it all to work and squashing all the ‘bugs’ by the deadline was the most challenging part of the project.”

Gabrielle: “We had some problems frying* the batteries and melting all the wiring, so figuring that out was one of our toughest challenges.”

If they were inventing the Aquerator again, Lawson could like to use radio frequency rather than Bluetooth to communicate with the device. Gabrielle would improve the battery life and use a larger solar panel.

In the future, Lawson would like a career involving computing, engineering or robotics, while Gabrielle is interested in being a teacher or doctor.

They both have their hearts set on an invitation to appear on the US talk show the Tonight Show starring Jimmy Fallon, in the Fallonventions segment.

“They’ve sent us some really nice emails, but they haven’t decided yet,” Lawson said. Bin It Right
Lucy Lonnqvist and Poppy Briggs from St Mary’s Anglican Girls School, WA, are the national winners in the year 9-10 category for waste management app Bin It Right.

The app uses photo recognition as a solution to improper waste disposal. Users simply take a photo of the item they would like to dispose of. The app scans the image and indicates whether it belongs in the green, waste or recycling bin. Lucy and Poppy’s invention, Bin It Right, has already won another award and has received a financial investment so they can develop it further. Picture: supplied

As older secondary students, it was a challenge to balance the demands of school work with the time their project took.

While Poppy would like to train to be an architect focusing on sustainable design, Lucy loves studying humanities and social sciences.

“I love to keep up with current affairs and issues affecting our society as well as problem-solving,” Lucy said.

“I think our project combines these interests which is why I have thoroughly enjoyed creating this app. In the future I’d love to see myself working as part of the UN and solving larger-scale problems affecting countries.”

Lucy and Poppy’s teacher shared the exciting news with Kids News that the girls made a successful pitch* of their invention to a waste-management conference in Perth – for adult business people, not kids. As a result, Bin It Right received the conference’s people’s choice award and a $4000 investment to further develop their app.

CLASSROOM ACTIVITIES
1. Find a favourite
After reading about the three inventions, decide which of them you find the most appealing.
Then:

If you needed to be ‘introduced’ to a family member, how would the MemoryBuddy introduce you? Choose a family member that you will be ‘introduced’ to. Write down what you would have the MemoryBuddy say, such as your name or a nickname the person might know you by, how you are related to each other and a special connection or memory you have that may help them to remember.

HAVE YOUR SAY: What problem or need would you most like to invent something to solve or help?
No one-word answers. Use full sentences to explain your thinking. No comments will be published until approved by editors.