Is my puppy happy, angry, scared or sad? A new app called happy Pets uses AI to report the breed of your dog or cat and the likely emotions it is experiencing. Picture: iStock

A new app uses Artificial Intelligence (AI) to tell you what your pet is thinking.

It’s called Happy Pets and it analyses an animal’s facial features, tells you what breed it is and indicates which of the five most common animal emotions — happy, angry, neutral*, sad and scared — it is feeling.

The free app, which launched this week, works on Apple iOS or Google Android.

It was developed by a team including Professor Uwe Aickelin, Yunjie Jia, Pei-Yun Sun and Rio Susanto who work in the School of Computing and Information Systems at the University of Melbourne, Victoria.

The Happy Pets app uses AI, or machine learning. It’s technology that’s used for vision in robotics and self-driving cars and it works by taking in images and assigning* importance to them.

One common use for AI is in facial recognition technology. Many of us can unlock our mobile phones with an image of our face and it’s an important part of security processes in, for instance, airports.

But this is the first time this kind of technology has been used for animals.

The researchers had to teach the technology to recognise that an image was an animal — instead of, for instance, a blueberry muffin. The technology had to first learn that this was a dog and then to detect emotions based on facial features associated with each emotion. Picture: Victoria Nielsen

Once the AI behind Happy Pets had learned all this, it then had to be able to detect emotions based on specific facial features that are associated with each emotion, which it has learnt from thousands of examples. For instance, if a dog tightens its eyes and mouth while changing the position of its ears in a particular way, it’s a sign of being scared. 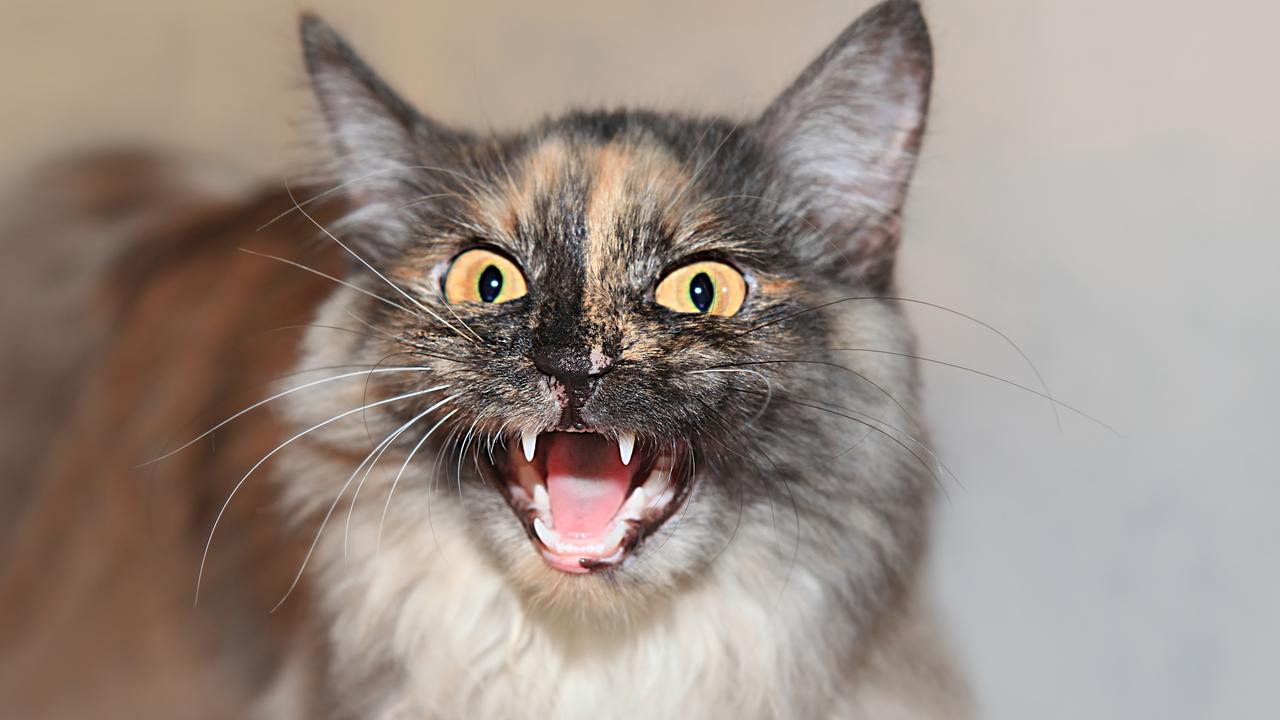 Kids News tried the Happy Pets app with this photo of a cat. The app suggested the cat was 95 per cent unsettled and there was 0 per cent chance it was happy.

Scientists know that human faces tell us a lot about what someone is feeling or thinking — that facial expressions are an important part of human communication.

They also know that some emotions (like happiness, fear or surprise) seem to have biologically ‘hardwired’ human expressions that are consistent across ethnicities* and societies, rather than being learnt.

How accurate are the results?

In an online article for Melbourne University’s Pursuit, the researchers write they’re happy with how the app performs.

“Well, we think they are pretty solid (results), having extensively tested the app, but you should judge for yourself,” the researchers wrote.

“At the moment, we only have a limited number of breeds available, so if yours isn’t there, it might get approximated* to the nearest one.” Two dogs taking a selfie. The Happy Pets app will work best if a human takes a photo of just one pet at a time — a dog or a cat — to analyse.

We used both photos from the internet and those we took of animals we know.

As expected, it didn’t recognise a photo we took of a lamb — it’s not designed to recognise sheep, only cats and dogs.

We also tried a photo of a cat from the internet and the app correctly identified that it was a cat and the breed (Egyptian Mau) and was 75 per cent certain it was scared. As we don’t know the cat, we can’t know if this was accurate.

The researchers would love feedback about how they could develop the app further. There are contact details in the About section of the app.

CLASSROOM ACTIVITIES
1. Pet’s Point of View
Imagine that you are a pet dog (or cat, or sheep!). Write a story for Pets News. Your headline is: ‘Is Happy Pet a Good Thing for Us?’

2. Extension
What other features do you think the app developers could include to make Happy Pets even better and more helpful for pet owners?

HAVE YOUR SAY: Without an app, describe how you judge an animal’s emotions.
No one-word answers. Use full sentences to explain your thinking. No comments will be published until approved by editors.