Flying car races set to take off after Aussie trials

A world-first “flying car” Grand Prix race series is planned for this year, after extensive* testing in the South Australian outback.

The planned race series follows tests of the Alauda Airspeeder Mk3 in a secret location in outback South Australia, under the observation* of the Civil Aviation Safety Authority.

The Alauda Airspeeder Mk3 is a 4m-long multicopter* that weighs 130kg and has a thrust-to-weight ratio* exceeding* some of the world’s most advanced fighter aircraft, such as the F15 fighter jet. 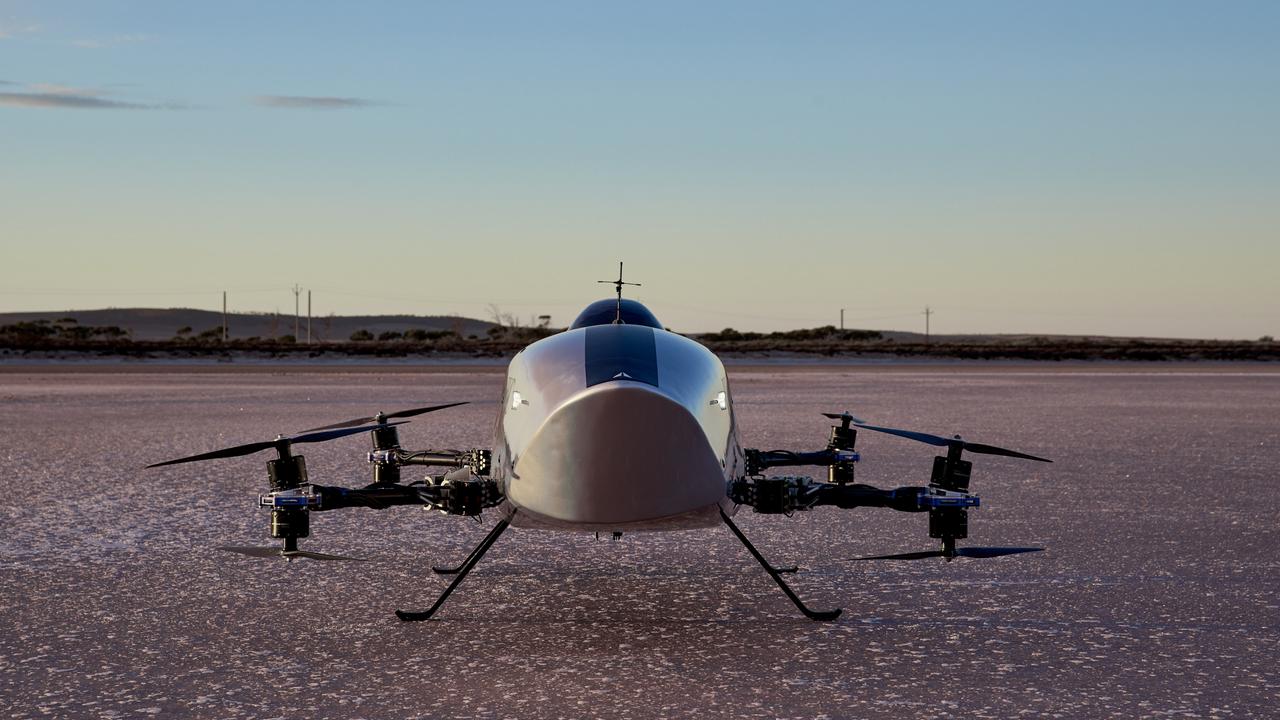 The Alauda Mk3 is expected to race at speeds or more than 190km/h in the Airspeeder EXA Series. Picture: Supplied

The Mk3 aircraft has room in its cockpit for a pilot, but at the moment is controlled by a robot linked up to a pilot on the ground.

If the uncrewed races can be done safely, it is hoped to move pilots into the aircraft, which are fitted with sensors and radar systems that are designed to prevent midair crashes.

The vehicles are powered by batteries that provide power for about 15 minutes of flying. With races lasting 45 minutes, two pit stops would be required for battery swaps. The Alauda Aeronautics Mk3 race-craft was tested in a secret location in South Australia. Picture: Supplied

Mr Pearson said he brought together technical experts, engineers and designers from Formula One and people with high-performance automotive* and aviation* backgrounds to work on the project.

There are 10 Mk3s being built for the race series in the Adelaide headquarters of Alauda Aeronautics.

The Airspeeder EXA Series will feature three races in yet-to-be announced international locations, with the events streamed to a global audience.

The races will take place on an “augmented reality*” course, which overlays a virtual environment on the physical world.

Mr Pearson said he hoped the race series would help improve the safety of the technology being used to design flying vehicles, just as road racing had improved car safety in the past.

“It’s not just racing for racing’s sake. Racing gave us seatbelts and disc brakes and rear vision mirrors,” he said.

Flying car takes off with passenger

CLASSROOM ACTIVITIES
1. Rev up
Have you ever watched a big sporting event on television, such as a footy grand final, a boxing match or a car or horse race? Think about what happens in the 10 or so minutes before the event begins – the commentators like to rev up the audience by talking enthusiastically about the event!

Write a “rev up” script for the first event in the Airspeeder EXA Series, featuring two commentators talking about how the event has come to fruition and what to expect from the race. Include facts from this news article. Make it exciting and use your “writer’s voice” to give the commentators some personality!

2. Extension
Given that the planned races will take place on an augmented reality course, the course could look very different to anything we’ve ever seen before. Draw a map of your very own fantasy flying car race course.