Ever had an idea for something new that you think the world would go crazy for?

We are talking big name companies here — Disney, Google and HP just to name a few.

Experts believe future jobs will require students of today to think creatively and innovatively* to come up with the ideas of tomorrow.

The Walt Disney Company, famous for movies such as Bambi, Frozen and The Lion King, started in 1923 in a garage owned by Walt Disney’s uncle. The rent was just $10 a month.

Walt Disney used the building as a studio and here, with his brother Roy, he made a series of short cartoon films called the Alice Comedies. These short films would go on to become Alice in Wonderland. 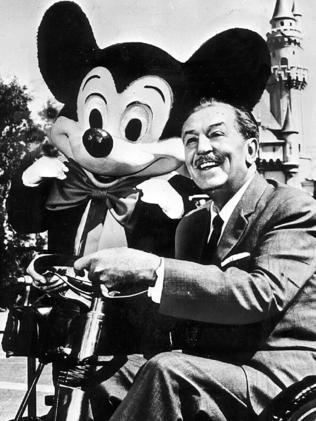 Walt Disney with his company’s most famous creation Mickey Mouse.

After moving to several bigger buildings, the famous character of mickey mouse was created.

Then in 1937, Disney’s first full-length animated feature, Snow White and the Seven Dwarfs, was released to critical acclaim and worldwide success. In order to expand and meet the expectations of his audience, Walt Disney saw a need to increase the size of his studio. With profits from Snow White, he made a deposit on 51 acres of land in Burbank and began designing a modern studio specifically for the purpose of making animated films.
Disney is still in this location today.

When Bill Hewlett and Dave Packard met as engineering* students in the 1930s at Stanford University in the US they had a dream to start a technology company of their own.

They moved into a house at Palo Alto in California and the landlady* told them they could use a small shed out back as a workshop.

In that tiny one-car garage, they first produced a medical device that produced heat and they sold it to a Palo Alto clinic. Another device they invented helped astronomers at the nearby Lick Observatory set a telescope accurately. And there were other inventions, too, some of them a bit more unusual — a harmonica tuner and an electric eye for automatic toilet flushing. David Packard and Bill Hewlett posing in front of the famous garage where they founded the HP company.

Their first big breakthrough was a device to measure sound frequencies: the resistance-tuned

Packard and Hewlett sold eight Model 200B oscillators to the Disney company, which needed new ways to monitor sound for its landmark movie Fantasia, to be released in 1940.

Now with just over $500 between them, the pair made their partnership official on

January 1, 1939, deciding the order of the company name — Hewlett-Packard Company — by a coin toss.

The original garage is still there today and is considered the birthplace of the Silicon Valley, the area famous for creating innovative products and being the home of hi-tech companies such as Google and Apple.

HP is famous for its laptops, computers, printers, gaming products and scanners.

The Google story began in 1995 at Stanford University in the US. Larry Page was considering attending Stanford and Sergey Brin, a student there, was asked to show him around. They fought the whole time on that tour but later struck up a friendship and, working from their dorm rooms, they built a search engine that used links to determine the importance of individual pages on the World Wide Web*. The home where co-founders Larry Page and Sergey Brin rented the garage to set up Google in Menlo Park, California

They called this search engine Backrub. Thankfully they later changed it to Google!

Over the next few years, Google caught the attention of not only the university community, but Silicon Valley investors* as well. In August 1998, Google Inc. was officially born. With investors giving them $100,000, the team moved to their first office — a garage in suburban Menlo Park, California, owned by Susan Wojcicki (now the boss of YouTube).

The pair continued to develop the search engine and it quickly attracted a loyal following and more investors.

Today, with more than 60,000 employees in 50 different countries, Google makes hundreds of products used by billions of people across the globe, from YouTube and Android to Smartbox and, of course, Google Search.

When Jeff Bezos decided to switch his finance background for selling books, he headed to the garage in his rental house near Seattle in the US and dreamt up one of the world’s biggest businesses.

Amazon — as we know it today — was originally called Cadabra because Bezos thought his idea was magical like the word abracadabra.

Thankfully he ditched that and named the company Amazon after the world’s biggest river.

Bezos’s first retail item in 1994 was books, which he shipped to customers all over America from his garage. From those humble* beginnings, the company has gone on to rule the world of online shopping and employ more than 125,000 people.

“Our customers are loyal to us right up until the second somebody offers them a better service,” Bezos says. “And I love that. It’s super-motivating for us.”

He must be doing something right, Amazon is worth more than $13 billion.

Mattel Creations, which is famous for toys including Barbie and Hotwheel cars, was started in 1945 by Harold “Matt” Matson along with Ruth and Elliot Handler.

Working out of a small garage workshop in southern California, Mattel’s original products were wooden picture frames.
Mr Handler developed a side business by building dollhouse furniture with the scraps of the wood left over from the picture frames.

But real success came when the Barbie doll they created was introduced in 1959 becoming the company’s best selling toy ever. Ruth and Elliot Handler with Barbie and Ken dolls.

In 1960, Mattel introduced Chatty Cathy, a talking doll that revolutionised* the toy industry due to its pull string talking mechanism and it also made them a lot of money.

Mattel has been responsible for some of the biggest toy hits of the past 75 years including Cabbage Patch dolls, Disney princess dolls such as Elsa and Cinderella, Winnie the Pooh dolls, He-man action figures and, of course, the many different types of Barbie and Ken dolls. .

Mattel is said to be worth almost $6 billion.

engineering: science and technology concerned with the design, building, and use of engines, machines, and structures.

landlady: a woman who rents out accommodation.

investors: a person or organisation that puts money into property or businesses

humble: being modest and not talking yourself up

revolutionised: to change something significantly

Create a table, based on the example below, that summarises how each of the companies featured in this article began and what they are doing now.

Fill in the rest of the table using your own words based on the information in the article.

Extension: Think creatively to come up with an idea for the next big product for each of these companies. The product should relate to what they currently do but be in some way new or different.

Choose one of the companies from the list. Draw a story board to visually represent the way the company has changed over time from their humble beginnings, through the evolution of their working space and products, to arriving at their present day success.

Extension: How well do you know the five companies in the article? Have a go at drawing each of their logos and then look them up to see if you were correct.