Launch of the first trial of a driverless bus in NSW. Picture: supplied

A DRIVERLESS bus could soon be carrying passengers on NSW roads for the first time.

As part of a two-year trial to begin later this month the small shuttle bus will whiz around Newington Armory* at the Sydney Olympic Park.

At first the vehicle, that can carry about six or eight people, will not pick up any passengers until safety checks and other tests are successfully completed.

But by the beginning of next year it is expected that the shuttle bus will be picking up passengers and ferrying them around Sydney Olympic Park on roads with other vehicles.

The trial, part of the NSW Government’s push towards “technology-enabled transport”, was launched at the Armoury by Transport Minister Andrew Constance and Roads Minister Melinda Pavey.

The Government has joined forces with transport company HMI Technologies, the NRMA, Telstra, IAG and Sydney Olympic Park Authority to conduct the trial.

“The trial, starting later this month, showcases a small part of our much bigger vision for a technology-enabled transport future,” Mr Constance said. “Today we drive our cars but the reality is, cars will soon drive us and while we are not there yet, we need to be prepared for this change and we need to stay ahead of the game.

“The ultimate goal of the trial is to find the best way to harness the next generation of driverless technology and how to make it work for NSW while also answering questions about how it can improve safety and reliability.”

Mrs Pavey said she expected office workers around Sydney Olympic Park would be using the automated* shuttle next year.

“We want to use the trial to help develop the systems that will enable automated vehicles to be connected to our infrastructure*, like traffic lights and to our customers through their devices and applications.,” Mrs Pavey said.

“It’s the combination of connectivity and automation that will provide the safety and mobility* benefits we are looking for.

“There is still some way to go before automated shuttles become common place on Australian roads, but as a Government we are ready to take the next step and from here all sorts of possibilities open up for transport in NSW.” 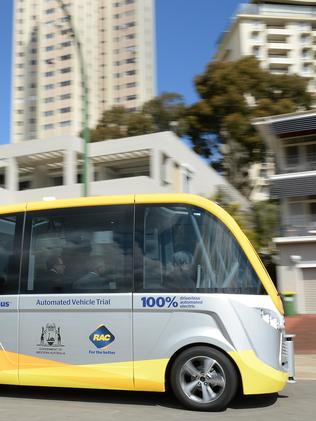 The NSW Government has established the Smart Innovation Centre, to work with industry to develop similar trials like this and explore future transport plans.

Legislation* to allow to the driverless bus trial to go ahead has been introduced into State Parliament.

Read or listen to the article carefully then complete the following activities.
Use your own words to explain the details and purpose of this trial.

Include the following information:

• Who is conducting the trial?

• Where is it being conducted?

• What do they hope to find out?

• When is it being started?
• What is the time frame for each stage of the trial?

Extension: Would you take a ride?

How do you feel about travelling in vehicles that have no driver?
What questions would you like answered before you would feel completely comfortable riding in one of these vehicles, or in another vehicle on the same roads as these vehicles?
Come up with at least five questions.

Time: allow about 30 minutes to complete this activity

If driverless cars are likely to be introduced on our roads, then the design of our cars may be able to change.

Redesign the interior and exterior of your family’s car taking into account that there won’t be a need for a driver’s seat and driving equipment.
Draw a labelled diagram of your new design.
Think about how you can use the extra space, and what you might like included.

Time: allow at least 60 minutes to complete this activity

Your task is to think from the perspective of someone who is really concerned that about technology and artificial intelligence (AI).

Replace all the dialogue in the article to voice your concerns about the dangers of driverless cars.
What other risks might be associated with driverless cars or technology?
Will this lead to jobs disappearing?
Or computers and robots becoming smarter than human beings?
Would people like to keep driving?

Remember, you can be as inventive and funny as you like!

CYCLISTS URGED TO SLOW DOWN