Territorial* ravens have attacked delivery drones in the nation’s capital this spring. Takeaway orders winging their way across Canberran skies have been swooped by birds, stopping delivery of coffee, food and even medicine.

The drones deliver small goods as part of Wing, a program run in collaboration* with Google, that currently services suburbs in the ACT. But some orders have been intercepted* by bold birds in broad daylight, resulting in a number of takeaway take-downs.

Canberra resident Ben Roberts was waiting for his daily coffee when he suddenly noticed that his drone was under attack.

He managed to film the raven hanging on to the back of the aircraft, furiously pecking it with its beak.

The drone struggled to fly under the weight of the large bird but Mr Roberts eventually had his breakfast delivered safely.

“They are certainly very territorial at the moment,” he told the ABC. “From their point of view – they’re very intelligent birds – what must a drone look like to them? It would be like a flying saucer landing in our front yard to us.”

A spokesman for the Wing service told The Daily Mail that the drones were operating as normal in other suburbs and they were unaware of any birds being injured by the drone.

“As is common during nesting season, certain bird species demonstrate territorial behaviour and swoop at moving objects,” the spokesman said.

“In the unlikely event that a bird makes direct contact with our drone, we have multiple levels of redundancy* built into our operations to ensure we can continue to fly safely.” It was an anxious wait for Canberra resident Ben Roberts as he filmed the raven that attacked a drone carrying his morning coffee. Picture: Benjamin Anthony Roberts via Storyful

And if a stoush between angry birds and burger drones doesn’t sound enough like science-fiction, the Associated Press reported Wednesday that robots have now hit the streets as demand for food delivery grows.

Hundreds of little robots – knee-high and able to hold around four large pizzas – are now rolling across university campuses and even some city streets in the US, the UK and elsewhere.

While robots were being tested in limited numbers before the coronavirus hit, the companies building them say pandemic-related labour shortages and a growing preference for contactless delivery have accelerated their deployment.

“We saw demand for robot usage just go through the ceiling,” said CEO of Starship Technologies Alastair Westgarth, after the company recently completed two million deliveries. “I think demand was always there, but it was brought forward by the pandemic effect.” One example of the delivery bots popping up in universities and towns in the US and elsewhere, the Russian-owned Yandex autonomous food delivery robot will be used in partnership with delivery service Grubhub in the US, according to AP reports. Picture: Yandex

Starship has more than 1000 robots in its fleet, up from just 250 in 2019. They deliver food in multiple towns and across 20 American university campuses, with 25 more being added soon.

Robot designs vary. Some have four wheels and some have six, but generally they use cameras, sensors, GPS and sometimes laser scanners to navigate footpaths and even cross streets autonomously*.

Remote operators keep tabs on multiple robots at a time but they say they rarely need to hit the brakes or steer around an obstacle*. When a robot arrives at its destination, customers type a code into their phones to open the lid and take their order.

But there are drawbacks*. They’re electric, so they must recharge regularly. They’re also slow at around 8 km per hour, and they generally stay within a small, pre-mapped radius*.

They’re also inflexible. A customer can’t tell a robot to leave the food outside the door, for example. 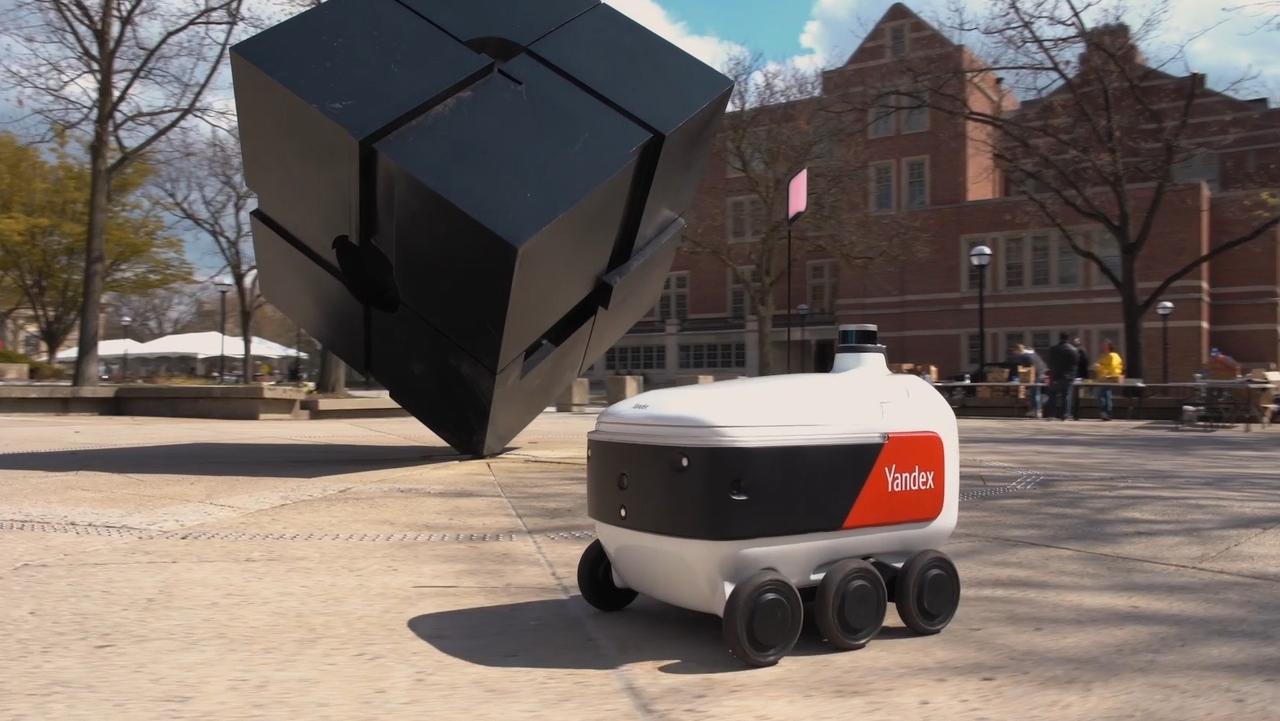 Delivery bots like this Yandex model make sense on university and corporate campuses as well as other communities liked aged care complexes, where there are wide footpaths, flat pedestrian access and a limited number of people and other obstacles – unlike conditions found on busy city streets. Picture: Yandex

But Bill Ray, an analyst with the consulting firm Gartner, says the robots make a lot of sense on corporate or college campuses, or in newer communities with wide footpaths.

“In the places where you can deploy it, robot delivery will grow very quickly,” he said.

Mr Ray said there have been few reports of problems with the robots, other than an occasional group of kids who surround one and try to confuse it.

Starship briefly halted service at the University of Pittsburgh in 2019 after a wheelchair user said a robot blocked her access to a ramp, but the university said deliveries resumed once Starship addressed the issue.

Delivery companies are also jumping into the market. Grubhub recently partnered with Russian robot maker Yandex to deploy 50 robots on the campus of Ohio State University.

Drones to patrol beaches and bush

CLASSROOM ACTIVITIES
1. Bird’s eye (point of) view
Can you tell the story of a raven attack on a drone from the bird’s point of view? Use your imagination to give vivid details about what the raven was thinking and doing throughout this encounter.

2. Extension
Sketch a design for your own delivery robot. Consider some of the potential problems (some of which are mentioned in the article) and be sure to include features that can help solve these issues. Name and label your robot design and write a paragraph about it.

VCOP ACTIVITY
Bird burglar
The group of notorious spy birds, known as The Ravens, are recruiting – and you want in. As part of initiation, you have to prove you are fit to join the elite squad by attacking the takeaway drones without detection. There will be many birds trying to complete the mission, so you’ll need to keep a lookout and be careful. This is an elite spy group, there will be lots of sabotage attempts from other competitors.

Write a short story retelling your mission. Were you successful? Did any other birds try to sabotage your attempts at intercepting a takeaway drone? Did you need more than one attempt?

Include who, what, when, where, when, a complication and a solution.

Try and hook the reader in by using a power opener (starting with an adverb, a verb or a connective).

Re-read your work and check your grammar and VCOP before sharing with a peer.