Australia’s first computer has new task: to inspire next generation of innovators Australia’s  first computer — the size of a car and one millionth of the speed and power of a smartphone — is today being opened to the public in the hope of inspiring new generations of scientists.

The 2500kg machine, made by the government science organisation CSIRO in 1949, was the first in the world to play music and only the fourth stored-memory* computer ever built.

Known as CSIRAC (Commonwealth Scientific and Industrial Research Organisation Automatic Computer) the machine was so energy hungry that it occasionally shut down if someone switched on an electric kettle nearby, overloading the power system and losing an entire day’s computing work.

From today, CSIRAC will be on display at its new home at science museum Scienceworks, in Victoria. Scienceworks has welcomed one of the most important pieces of Australian innovation, CSIRAC. Picture: David Caird

“This room-filling machine is the technological* ancestor* of your phone or laptop, but was nowhere near as powerful and definitely couldn’t fit in your pocket,” Scienceworks acting general manager Jonathan Shearer said.

Originally built at CSIRO in Sydney, CSIRAC was moved to the University of Melbourne in 1955. It took a whole year to rebuild it and it was eventually turned back on in 1956.

For the next eight years, CSIRAC provided an important computing service for science and businesses. Trevor Pearcey, an Australian computer pioneer, pictured with CSIRAC when it was in use in the 1950s.

Demand for time using CSIRAC was so great, that people often had to wait weeks to use it.

It worked for about 30,000 hours, tackled* around 700 projects and was used to play the first electronic music, make weather forecasts, calculate mortgages* and even play some of the first computer games. 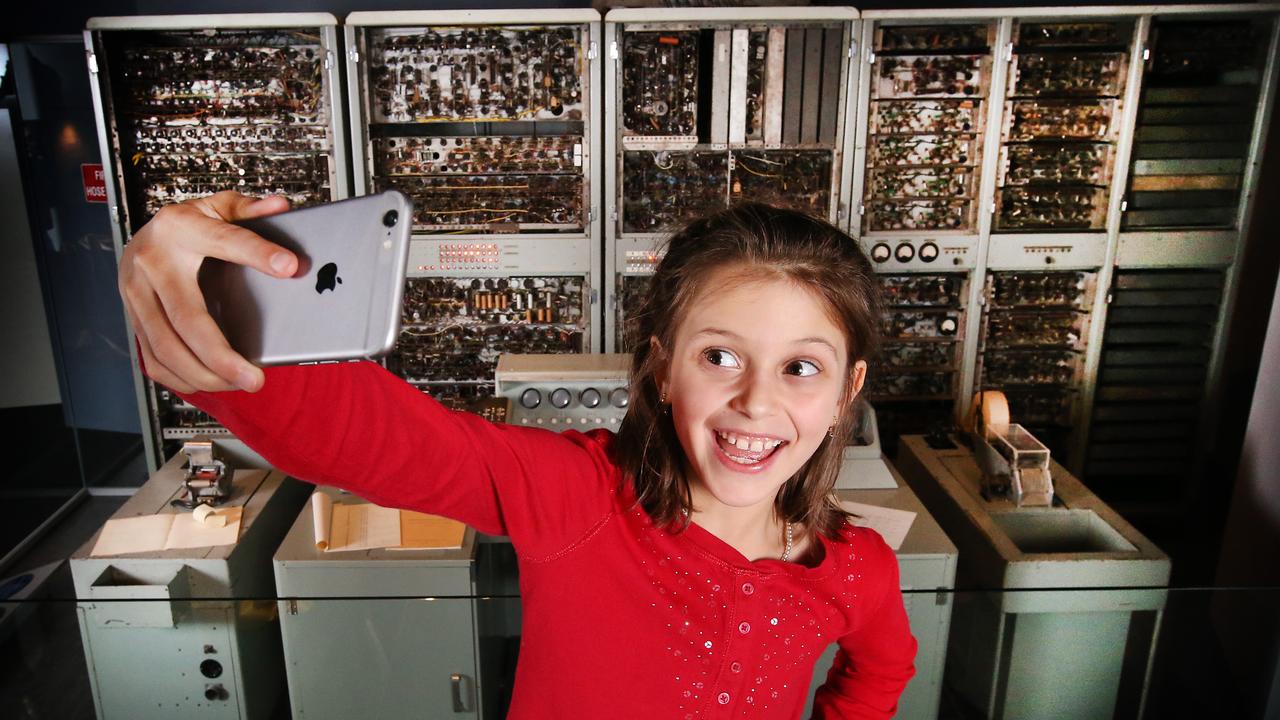 Beatriz Pretel, 8, gets a selfie of herself with today’s computer technology the iPhone, with its ancestor CSIRAC. Picture: David Caird

Computers improved very quickly after CSIRAC. By 1968, US company Hewlett-Packard (founded by Bill Hewlett and David Packard in a garage) released the first desktop or personal computer, the 9100A. It was advertised as a desktop calculator because people thought a computer had to be big to be good. Hewlett-Packard’s 9100A, the first desktop or personal computer.

Bill Hewlett said “If we had called it a computer, it would have been rejected by our customers’ computer gurus* … We, therefore, decided to call it a calculator and all such nonsense disappeared.”

The 9100A could be programmed to do the type of mathematics tasks that secondary school students’ scientific calculators do.

CLASSROOM ACTIVITIES
1. Come to see CSIRAC
Create a poster or write a script for a TV or radio commercial that will encourage kids to visit Scienceworks to see CSIRAC.

2. Extension
As you have read in the story, CSIRAC was built in 1949. What do you think computers, devices or technology will be like in 2049? Write down your ideas, then create a design for one device or type of technology that you think we could be using in 2049.

VCOP ACTIVITY
With a partner see if you can you identify all the doing words/verbs in this text? Highlight them in yellow and then make a list of them all down your page. Now see if you and your partner can come up with a synonym for the chosen verb. Make sure it still makes sense in the context it was taken from.

Try to replace some of the original verbs with your synonyms. Discuss if any are better and why.

HAVE YOUR SAY: What would you most miss if computers were still like CSIRAC or HP’s 9100A?
Explain your answer in full sentences.