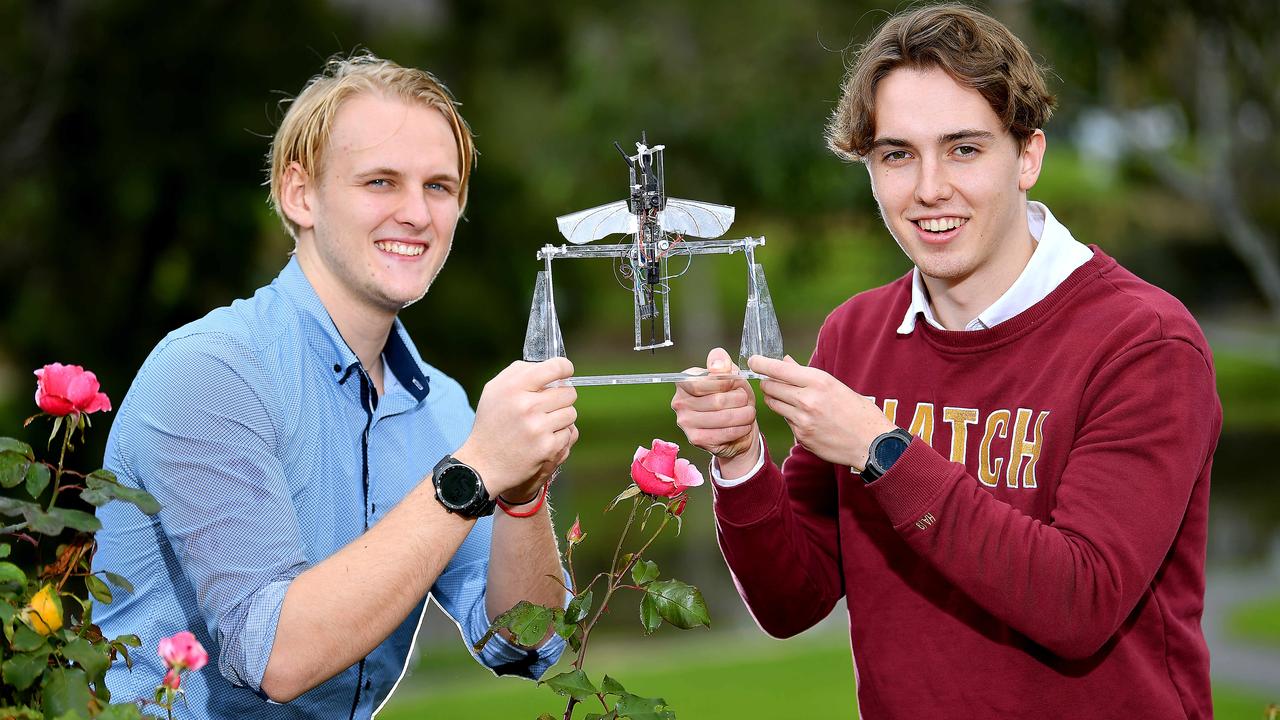 Taking tips from nature, a team of mechanical engineering* students has invented a pollination drone that could one day replace bees.

Together with collaborators* in South Korea, the University of Adelaide students are perfecting their small aerial vehicle, which has a probe* to transfer pollen from one flower to another.

James Cartwright, 22, said the Adelaide group of students is mainly working on the flight control system.

“It will at least hover when we’re finished,” he said.

“The overall goal is for it to approach a flower and pollinate it, but we have a lot of work still to do.”

William Foster-Hall, 22, has enjoyed applying his knowledge “outside of the classroom”.

“The project has been challenging but also quite exciting,” he said.

“We’re at the forefront* of current research in mechanical and aeronautical* engineering, using technology that has not been tested or widely adopted*. There’s only a handful of other projects like this in the world.”

The Australian team of four, also including William Tam, 23, and Harshil Vinod, 22, has already put in a combined total of more than 400 hours work on the project.

They are working towards Ingenuity, an annual event organised by the Engineering, Computer and Mathematical Sciences Faculty at the University of Adelaide for students to showcase* their projects to the public, which is usually held in October.

Supervisor Associate Professor Rini Akmeliawati is excited about the potential for technology to meet growing demand for automation* in agriculture*. She’s especially looking forward to flight tests of the pollination drone next month.

“They managed to manufacture the prototype*, put in and program the electronics including sensors, vision, control and communication systems, and get it to flap its wings accordingly*, which is really quite an achievement.”

Mr Cartwright said the flapping mechanism was based on the biology of the rhinoceros beetle, rather than that of the honey bee. CLASSROOM ACTIVITIES
1. Drone Bee
The article states that the supervisors of the project are excited about the potential for technology to meet the growing demand for automation in agriculture.

Using a drone to pollinate flowers is a big advancement in using technology to do something we normally rely on an insect to do.

Work with a partner to brainstorm and list some other ways that technology could be used to perform some agricultural tasks.

Agriculture is the art and science of cultivating the soil, growing crops and raising livestock. It includes the preparation of plant and animal products for people to use and their distribution to markets. Agriculture provides most of the world’s food and fabrics

Use a table like this to record your brainstorm results.

2. Extension
How do you think technology such as this pollination drone could affect the role of nature? Could this type of technology be dangerous to our ecosystem?

HAVE YOUR SAY: What would you invent a drone to do?
No one-word answers. Use full sentences to explain your thinking. No comments will be published until approved by editors.