Cyclist Mark Beaumont has smashed the British record for the distance travelled on a penny farthing in one hour. The 35-year-old Scottish athlete rode 35.27km in one hour on Friday at Herne Hill Velodrome* in south London, UK.

But Mr Beaumont missed out on breaking the world record of 35.55km, which is held by American rider William Rowe, set way back 132 years ago in 1886.

‘[It] will go down in history as one of the most off-the-wall* challenges I’ve ever taken on,’ Mr Beaumont said. ‘Those cyclists back in the 1800s set the bravery high — and it’s taken over a century to crack. I am utterly* exhausted and beyond thrilled to have reached new heights — quite literally!’

Mr Beaumont, who in September last year broke the record for travelling around the world on a bike, spent months training for his latest feat*. His round-the-world record — on a modern bike — is 79 days, 44 days fewer than the previous record. British cyclist Mark Beaumont with his family after arriving at the Arc de Triomphe in Paris on September 18, 2017 to complete his world-record ride around the world. Picture: AFP

Penny farthings, which are also know as high-wheel bicycles, or high wheels, were invented in 1871 by British engineer James Starley.

Although they are difficult to get on and off and more difficult to ride than modern bikes because the rider is sitting so high in the air, they were a big improvement on other early bike inventions, mostly because they were faster and more comfortable to ride on rough stone-cobbled* streets. 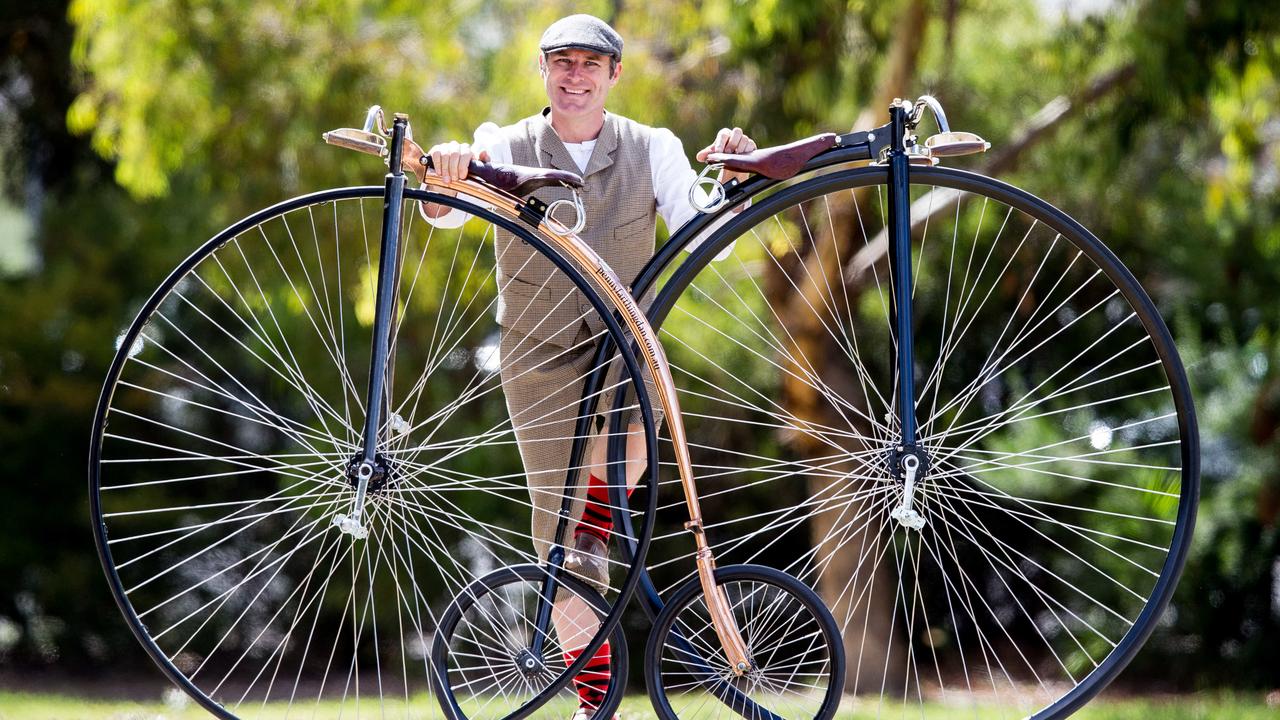 There are still many penny farthing enthusiasts* in Australia, with a big festival and the national championships each February in Evandale, Tasmania. Members of the South Australia Bicycle Club in their club uniforms around 1875. Picture: State Library of SA

dignified: behaving in a way people will respect

1. How far did Mark Beaumont ride in one hour?

2. Who holds the world record he tried to beat? When was it set and how far did the cyclist ride?

3. Mr Beaumont already has a world record. What is this for?

4. When were boneshakers popular and why were they called that?

5. Who was John Starley? What did he do and when?

Print and cut out (or rewrite) each of the lines of text below. Sort the information into 3 groups so that you end up with 3 sets of facts about 3 different types of velocipedes detailed in the news story. Hint: You should end up with 4 statements in each set of facts.

Made of metal with solid rubber tyres

Known as the “Rover safety bicycle”

Invented in 1871 by James Starley of Great Britian

Featured 2 wheels of the same size

Known as a penny farthing or “high-wheel bicycle”

Faster, easier and more comfortable to ride than previous velocipedes

Made of wood and metal

Invented in 1885 by John Starley

Extension: Draw a picture of the 3 velocipedes to match up with each of your sets of facts.

Use full sentences to explain your answers.