AUSTRALIAN football legend Lou Richards has died at age 94 and is being remembered as a champion player and a groundbreaking media sports personality.

Richards played 250 games for the Collingwood Football Club between 1941 and 1955, including captaining the 1953 premiership side.

Collingwood president Eddie McGuire said on Monday night that the game had lost one of its most remarkable characters.

“No man has done more for our game than Lou Richards,” McGuire said.

“He was the quintessential* Collingwood man who spoke to the entire football world.

“Lou just epitomised* everything about Collingwood. No one loved Collingwood any more than Lou, and it is fair to say that Collingwood people loved Lou as much as anyone.”

“With a larrikin* charm and a great sense of humour, and not a little talent as a player, Lou became one of the giants of his century,” Buckley said. 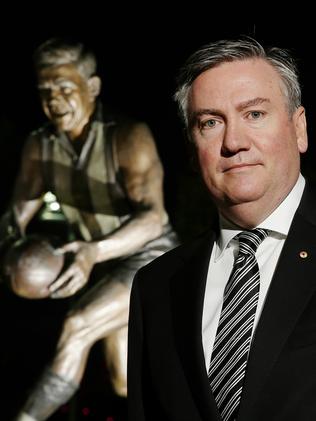 “Today is a sad day for so many people, Collingwood or not, and our thoughts are with his family.”

The State Government has offered a state funeral to the Richards’ family.

A state funeral is a public funeral ceremony, held in a large-sized facility* to enable everyone to come and honour the person who has died.

State funerals are usually reserved for important people who have served the community in high positions, such as politicians, but are sometimes also offered to influential Victorians.

“Lou Richards was a legend of our game and an iconic figure for Victoria,” the Victorian state government said in an official statement.

“The Government has offered a state funeral to Lou’s family. The family is considering this offer — it will be their decision.”

AFL chief executive Gillon McLachlan said Richards would be remembered for setting new standards into how the media covered the game. Lou Richards beside a framed photo of the Collingwood 1896 Premiership Team.

“Everyone in our industry who is fortunate enough to earn a living around the game we love has the likes of Lou Richards to thank for his work ethic, his love of the game, his willingness to poke fun at himself and others and his one-off originality.”

Richards was a key figure in footy coverage for the Herald Sun newspaper, formerly The Sun News-Pictorial, and he introduced the Kiss of Death tipping column, which still runs in the paper today.

To gain an insight into what Lou Richards meant to the Herald Sun watch the video below.

1941: Makes Collingwood debut in Round 6 against Carlton, following in the footsteps of grandfather Charlie Pannam and uncles Charles and Alby Pannam who both played for the club.

1956: Replaces great friend Jack Dyer as resident tipster at The Sun. His Kiss of Death column becomes legendary due to the outrageous dares he took on if his tips failed.

1959: Joins Channel 7 and forms part of the original World of Sport panel with Jack Dyer and Ron Casey.

1987: Switches to Channel 9 and becomes a regular on both The Footy Show and The Sunday Footy Show. 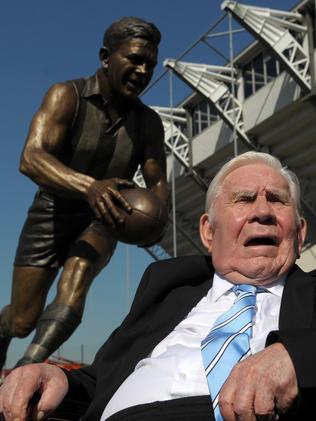 Lou Richards in front of his statue. Picture: AAP

2014: Immortalised with a bronze statue at Collingwood’s new headquarters.

Write a fact file on Lou Richards using all the information from the article and Herald Sun video.

Present your fact file on a piece of A4 coloured paper and include an image of Lou.

– Calculate his average number of games per year of his football career.

– How many years have passed since Lou captained the 1953 premiership side?

– What year was Lou born?

– How do you think the football community will remember Lou Richards?

How do you think Lou’s life should be celebrated at the next Collingwood game?

What is a fitting tribute to a man that meant so much their club?

Write a plan of what the Collingwood Football Club could do to honour him.

Create a wordle on the computer using adjectives from the story that describe Lou Richards.

Select five of these words to describe someone you know.

Write an acrostic poem about Lou Richards using some of the information included in the article and video.

AFL’S SALUTE TO THE COUNTRY