Tokyo Paralympics kick off in blaze of colour The Tokyo Paralympics opened in a blaze of colour, pageantry* and a reassuring message of hope to the world.

Only a trickle of the record 4403 athletes who will compete in Tokyo took part in the opening ceremony in an effort to prevent the spread of Covid-19.

In keeping with tradition, the Games were declared open by the Japanese Emperor Naruhito after a dazzling ceremony that followed the theme “We have wings”, symbolising the struggle and resilience of everyone with a disability. 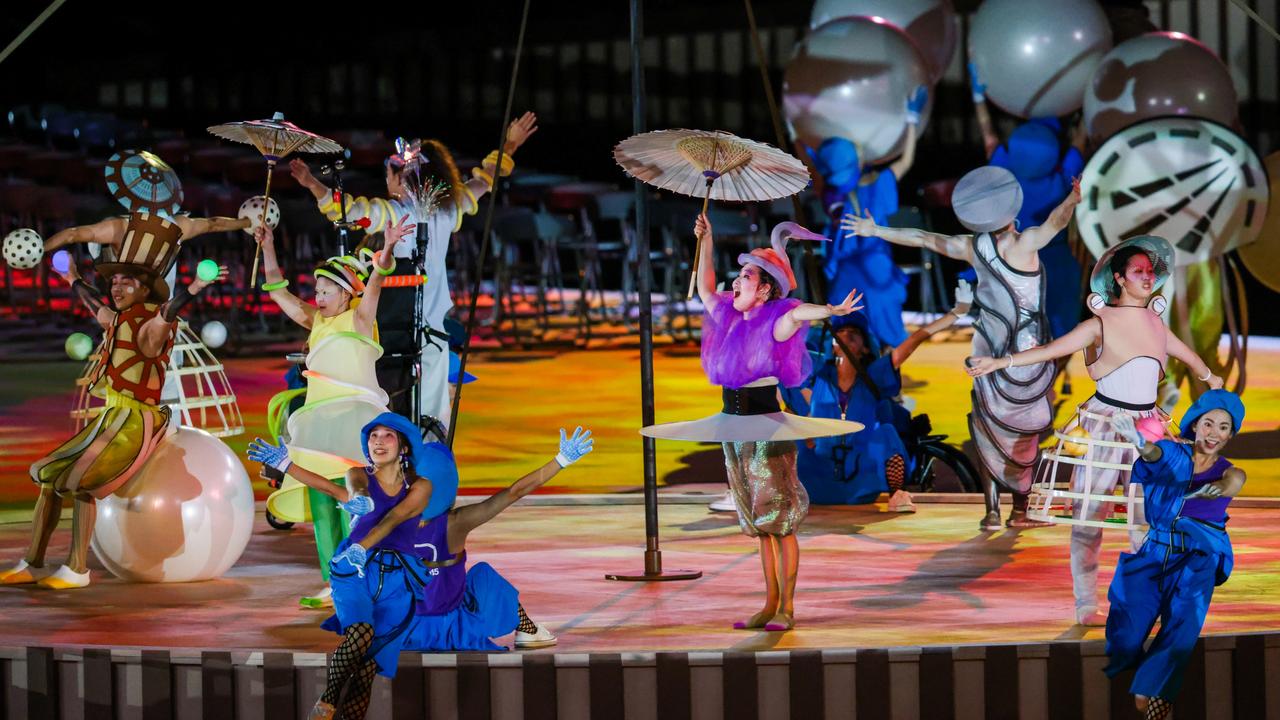 The opening ceremony of the Tokyo Paralympic Games was full of colour and hope. Picture: Getty Images

The refugee team was promoted to the front of the parade of nations, ahead of Greece, while the Afghanistan flag was carried by a volunteer because none of the country’s athletes made it to Japan after the Taliban seized control of their homeland last week.

While the ceremony included a moving commitment to human rights, the theme centred around the aspirations* of a little one-winged plane that wanted to fly but was unable to, until eventually being lifted by the winds of hope. The one-winged plane symbolised the struggle and resilience of athletes during the opening ceremony of the Paralympic Games. Picture: Getty Images

Australia’s team of a record 179 athletes were represented at the opening ceremony by joint flag-bearers Danni Di Toro and Ryley Batt.

Di Toro, who is at her seventh Paralympics, and Batt, a rugby wheelchair star who is at his fifth Games, are also the Australian team’s co-captains.

“Given what we’ve all gone through over the past 12 months, I could not pick more deserving, more supportive athletes who have been there for each and every one of this team,” said Australian chef de mission McLoughlin, who chose the flag-bearers and marched behind them at the opening ceremony. 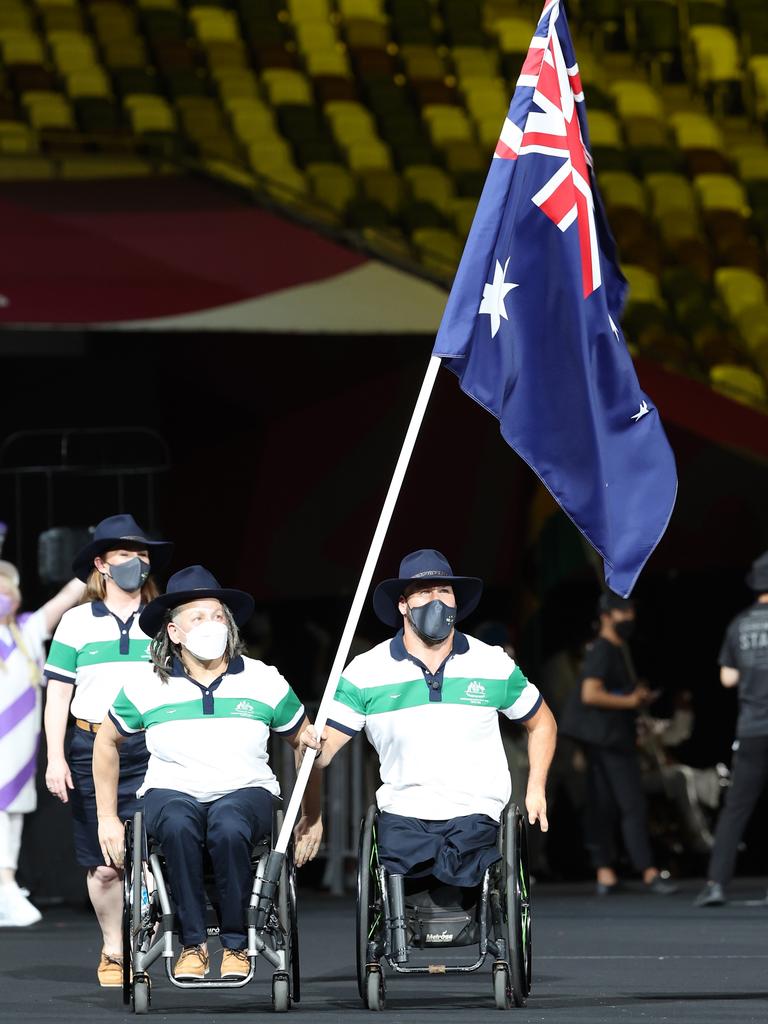 “They do so much more than what normal captains would do … I think every member of this athlete cohort* knows how special these two are.”

Di Toro, a former world No.1 wheelchair tennis player, will compete in table tennis at the Tokyo Paralympics.

One of the most respected Paralympic athletes in Australia, she became a paraplegic* in 1988 when a wall collapsed on top of her during a school swimming carnival.

Now 46, she has already won two Paralympic medals – a silver in Sydney in 2000 and a bronze in Athens in 2004 – but said being selected to carry the flag was her greatest honour.

“When I first got told, to be honest, there were tears,” she said before Tuesday night’s opening ceremony.

“When people see and appreciate what you do, how much you care and how fiercely passionate you are, it’s really quite emotional and overwhelming.

“I feel like there are so many people in our team that this honour could have been bestowed* upon. That it’s Ryley and I is a bit mind blowing for me. I feel incredible gratitude.” Batt is also a hugely popular member of the 179-strong Australian Paralympic squad in Tokyo.

Born without legs, the 32-year-old is regarded as the best rugby wheelchair player in the world, having already won gold medals with the Steelers* at each of the past two Paralympics.

“It’s an extreme honour and I’m super proud to share this moment with Danni at a special Paralympic Games,” he said.

“The world’s going through a lot of negativity at the moment, but this is a hugely positive thing for Australia.

“Danni and I are just being ourselves and bringing this mob together.” Colourful fireworks explode above the stadium during the opening ceremony of the Tokyo Paralympic Games. Picture: Getty Images

Competition gets underway today, with 130,000 schoolchildren allowed into venues to watch events live after all spectators were banned from the Olympics.

Australia is expected to win up to 100 medals in total and finish in the top five countries in the world.

CLASSROOM ACTIVITIES
1. Acrostic poem
Create an acrostic poem about the Paralympics. Write the letters of the word Paralympics down the left side of your page and then write words, phrases or sentences beginning with each letter that describe the Paralympic Games in Tokyo.

VCOP ACTIVITY
I’ve always wanted to know
If you had the opportunity to talk to Danni Di Toro or Ryley Batt and ask them five questions, what would you ask them?