An actor is dressed as an Ancient Greek high priestess for the ceremony to handover the Olympic flame for the Tokyo Olympics. Picture: AFP

We should have been cheering on our Olympic heroes in Tokyo right now.

But with coronavirus forcing the Olympic Games to be put on hold for another year, it’s a chance to look back at where it all started.

The Olympic Games date back 2800 years to the Olympia region of Ancient Greece.

Also known as the Olympiad, the sporting and cultural event ran every four years for almost 1200 years, from 776BC to at least 393AD.

The Games were held for the first 250-plus years at Olympia, a sacred* site in western Greece featuring an altar* to Zeus, king of the Greek gods. The athletes’ entrance to the original stadium in Olympia, Greece. Ruins at Olympia, where the Olympic Games were first held in 776BC.

By the fifth century BC, the Games lasted five days and included running, jumping and throwing events, along with chariot racing, boxing, wrestling and pankration which was a brutal combination of wrestling and boxing with hardly any rules.

The Games were open to all free Greek males, with all athletes competing naked. Women were not allowed to compete or even attend.

At least 40,000 spectators would have packed the stadium each day at the height of the Ancient Games’ popularity. Baron Pierre de Coubertin is considered the father of the modern Olympic Games.

He presented his idea to restart the Olympic Games to an international meeting in Paris in 1894. His idea was unanimously* accepted and two years later the first modern Olympic Games were held in the Greek capital of Athens.

More than 240 athletes from 14 countries competed in 42 events at the Athens Olympics of 1896.

When the Olympic flame is finally lit at the postponed* Tokyo Games in Japan on July 23, 2021, it will be the 32nd time the modern Games have been held.

In all, 19 different countries have hosted the modern Games, including Australia.

Australia first hosted the Games in Melbourne in 1956, with 3314 athletes from 72 countries competing in 151 events. It was also the first time the Games had been held in our Oceania region of the world.

Equestrian events had to be held in Stockholm, Sweden, five months before the November 22 opening ceremony at the MCG. This was to avoid the problem of quarantining* horses under Australia’s strict biosecurity* rules. Competitors marching during opening ceremony of 1956 Olympic Games in Melbourne at the MCG in 1956. Athletes parade together, rather than by country, for the first time at the closing ceremony of the Melbourne Games.

The 1956 Games were the first time athletes paraded together, rather than by country, in the closing ceremony. This change was suggested by John Ian Wing, a Chinese apprentice carpenter living in Australia, who proposed it as a symbol of world unity.

The Games returned Down Under in 2000, when runner Cathy Freeman lit the flame in a spectacular opening ceremony in Sydney on September 15. Freeman went on to win gold in the 400m final, while swimmer Ian Thorpe took home three gold and two silver medals. Runner Cathy Freeman lights the Olympic flame to complete the opening ceremony of the 2000 Sydney Olympic Games in 2000.

Five interlocking rings make up the well-known symbol of the Olympic Games. The rings represent the bringing together of the continents — Europe, Asia, Africa, the Americas and Oceania — and the meeting of athletes from around the globe.

Created by Baron de Coubertin, the blue, yellow, black, green and red Olympic ring symbol was publicly presented for the first time in 1913 and made its first Games appearance in Antwerp, Belgium, in 1920. A woman wearing a face mask poses for a photograph next to the Olympic Rings in Tokyo, Japan, where the 2020 Games have been postponed by coronavirus until July 2021. Picture: Getty Images

Like the Games themselves, the modern tradition of the Olympic flame began in Ancient Greece. The Greeks lit sacred fires at Olympia to honour the gods during their Games. These Olympic fires were kept burning until the Games were over.

Today, the lighting of the flame at Olympia marks the start of the countdown to the Games. It is also an important ceremony that links the ancient and modern versions of the games. An actor performs the role of high priestess to light the Olympic Torch at the ancient stadium in Olympia. Picture: Getty Images

However, the flame did not become part of the modern Olympics until 1928 in Amsterdam, and it was only in the lead-up to the Berlin Games in 1936 that the flame was again lit at Olympia, where it is been lit for every summer Games since.

The Olympic Torch Relay was created at the same time as the decision to light the Berlin flame at Olympia.

Since then, the torch has been carried by hundreds of thousands of people around the globe. It even did an underwater leg at the Great Barrier Reef ahead of the Sydney Games and was taken on a space walk by a Russian cosmonaut before the 2014 Winter Games in Sochi, Russia.

When the flame finally arrives at its destination, the final torchbearer runs into the stadium to light the Olympic cauldron*. The cauldron is only extinguished* at the closing ceremony. 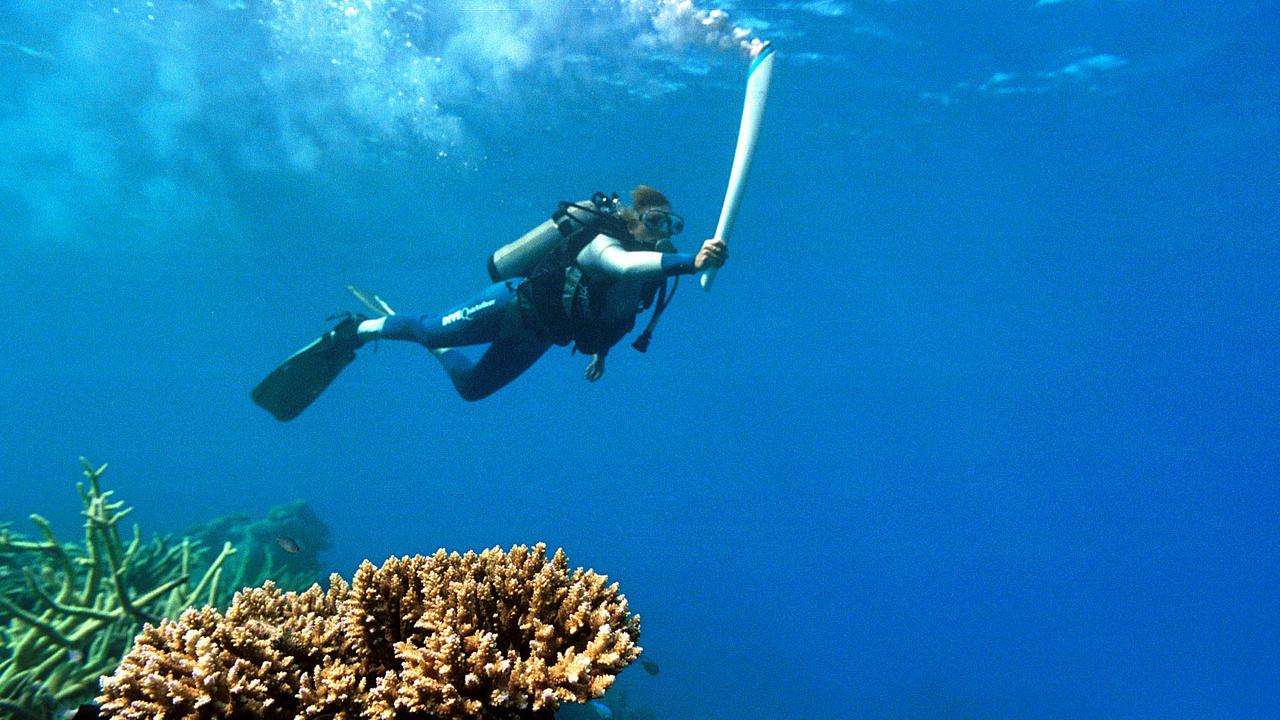 The Olympic Torch is carried by marine biologist Wendy Craig Duncan at the Great Barrier Reef ahead of the Sydney Olympic Games in 2000. Picture: Steve Nutt Swimmer Ian Thorpe shows off the three gold medals he won at the Sydney 2000 Olympic Games. Swimmers Wilhemina Wylie and Sarah “Fanny” Durack were our first female Olympians when they competed at the Stockholm Games in 1912.