The Barty party’s over but it sure was memorable, says cartoonist Mark Knight Mark Knight pays tribute to tennis champ Ash Barty after her shock retirement in his latest cartoon for Kids News.

She is a triple major tennis tournament winner, a great ambassador* for her sport and Australia, and she has just retired. She is of course Ash Barty.

Australia’s favourite daughter has hung up her racquet and sent the nation into a frenzy. We are in two minds about the news. On the one hand, people are shocked that we have lost a champion and a role model. On the other hand, we admire her decision to step away while at the top of her game, to reject the chance of more fame and fortune and choose a path to a normal life. That takes courage!

I was sitting at my desk at the Herald Sun when the news broke about her decision to retire. I dropped everything, grabbed a clean sheet of paper and started to doodle ideas about how to capture this moment.

I had only a couple of months ago drawn a cartoon about her winning the Australian Open in Melbourne. Now I was drawing about her retirement! There were several facts I wanted to get into the cartoon. Firstly, the woman herself, that great smile and her humble* nature.

Then there were her recent achievements: The 2022 Australian Open, the Wimbledon crown in 2021, the 2019 French Open and being the current World No. 1 player. These had to be in the drawing. 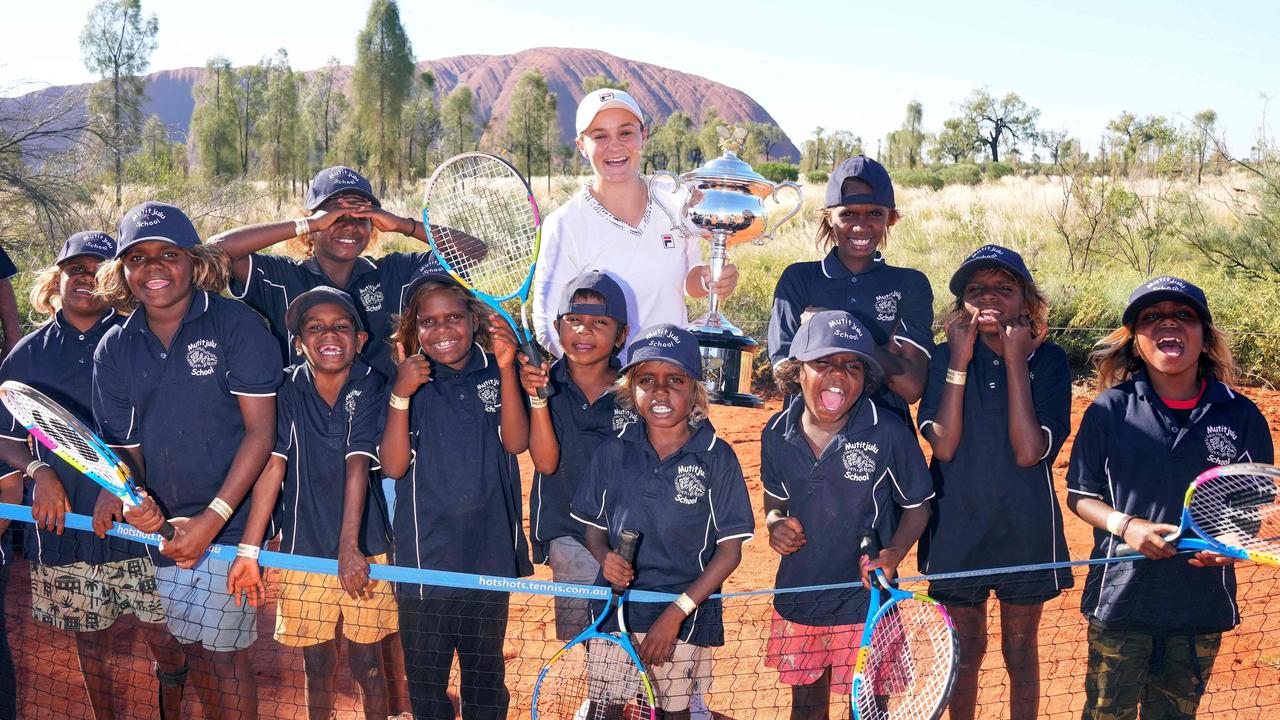 Mark Knight wanted to capture Ash Barty’s smile and humble nature in his cartoon. Here she is pictured with students from Mutitjulu school and her Australian Open trophy on a recent visit to the Northern Territory. Picture: Tennis Australia/AFP

And finally, the fondness for her in the hearts of Australians. We have seen so many ungracious* performances by professional tennis players recently (and I admit it is kinda fun and amusing at times to watch these on-court temper tantrums), but never from Ash. Her demeanour* and humility* have made us proud. I wanted the cartoon to show our love for the lady. Now I just had to work out how to get it all into the one drawing, without making it too clunky.

I love the tag “Barty Party”. When she won the recent Aussie Open, Australia partied! It was good news after years of Covid and lockdowns. Melbourne and Rod Laver Arena shone brightly.

I took up my pen and imagined the “Barty Party”. I drew a nightclub scene, strobe lights, people on the dance floor, hands raised in the air.

I added Ash into the middle of the crush on the dance floor. She has that beaming smile on her face, and her tennis bags are on her shoulders, holding her trophies.

She is not dancing though. I wanted to draw her in that familiar pose we see from tennis players as they leave the tennis court after a big match: carrying their heavy tennis bags, their arm raised, waving goodbye, looking up into the crowd.

In the cartoon Barty is making her way to the exit of her party. She’s leaving early. It’s her decision and we see in the cartoon that she is happy with that.

A reveller notices she is leaving too soon and is shocked because in his opinion the party is just getting started!

However, Ash Barty is wise beyond her years and level headed to the end. She knows when she’s had enough. Time to head for the exit and call an Uber! Ash Barty and her coach, Craig Tyzzer, front a media conference in Brisbane on March 24 after the tennis champ announced her retirement on social media the day before. Picture: Liam Kidston

CLASSROOM ACTIVITIES
1. Give your feedback
Imagine that you are Ash Barty. Write an email to Mark telling him what you think about his cartoon.

2. Extension
“That takes courage!” Write a story or draw your own cartoon that is inspired by this sentence.

VCOP ACTIVITY
Acrostic Poem
Create an acrostic poem about Ash Barty. Each letter of her name should be the beginning of a short sentence and include some interesting facts and information about this inspiring Australian athlete. Try to include varied words throughout your poem to maintain the interest of the reader.