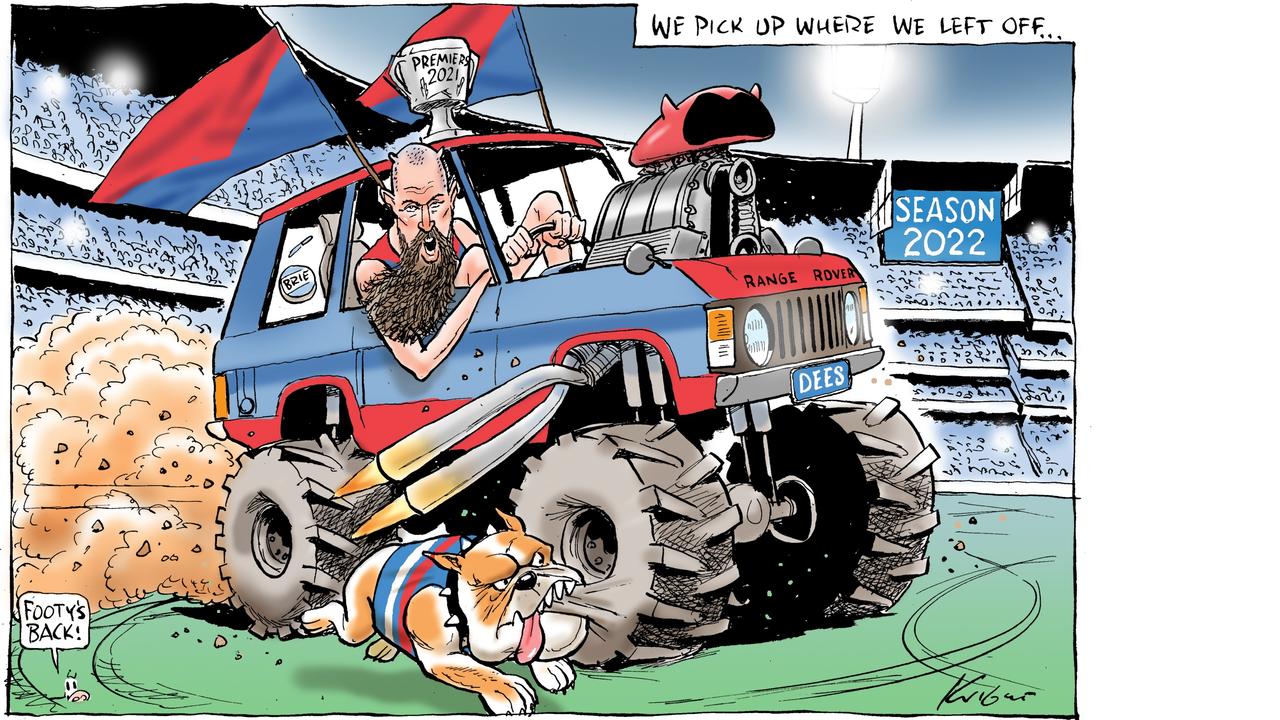 Mark Knight celebrates the return of AFL to the MCG in 2022 in his latest cartoon for Kids News.

Let’s be honest, so far 2022 hasn’t been any better than 2020 or 2021. In fact, if it were an item we bought through an online shopping site, it would be returned and we’d be asking for our money back!

However, there was some good news this week when football came back into our lives.

The AFL season for 2022 commenced with a midweek Grand Final replay between the reigning premiers*, the Melbourne Demons, and the Western Bulldogs at the MCG.

“Great!”, I thought, I get to draw a cartoon about footy and not war or viruses! 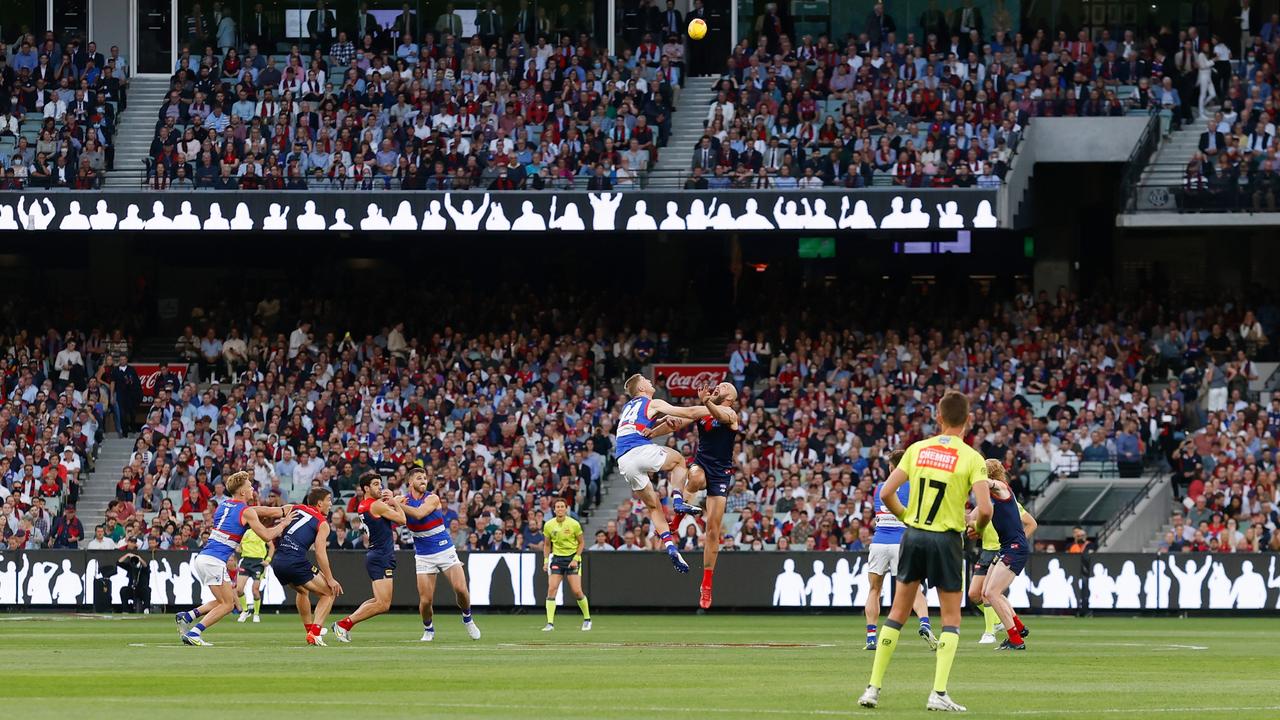 The 2022 AFL season is off and running with this first bounce in the Grand Final replay match between Melbourne and the Western Bulldogs. Picture: AFL Photos via Getty Images

These two sides are wonderful to caricature* for a few reasons. Firstly, they both have great mascots: a demon and a bulldog.

They have interesting players to draw: Melbourne’s captain Max Gawn with his bald head and huge beard and Bulldog Bailey Smith with his long, flowing mullet. Melbourne captain Max Gawn celebrates his team’s win over the Western Bulldogs in the opening match of the 2022 AFL season. Picture: Mark Stewart

The cartoon was to be drawn before the game as a lead up to the season opener, so my idea was to rev up the event.

And “rev up” is what I did, putting Melbourne captain Gawn in the traditional club supporter Range Rover. Using my cartoonist’s licence* for exaggeration, I continued a theme I created for last year’s Grand Final, and Gawn became Mad Max and the Range Rover morphed* into the type of vehicle you might have seen in the movie Fury Road. Huge throbbing engine, massive monster truck wheels and a Premiership Cup strapped to the roof. Gawn’s beard flaps out the window as he rips up the hallowed* turf of the MCG.

Now to add the bulldog. I thought our bulldog should be chasing the Range Rover, like any western suburbs mutt that has escaped from the backyard, squeezed under the fence and chased cars down the street! 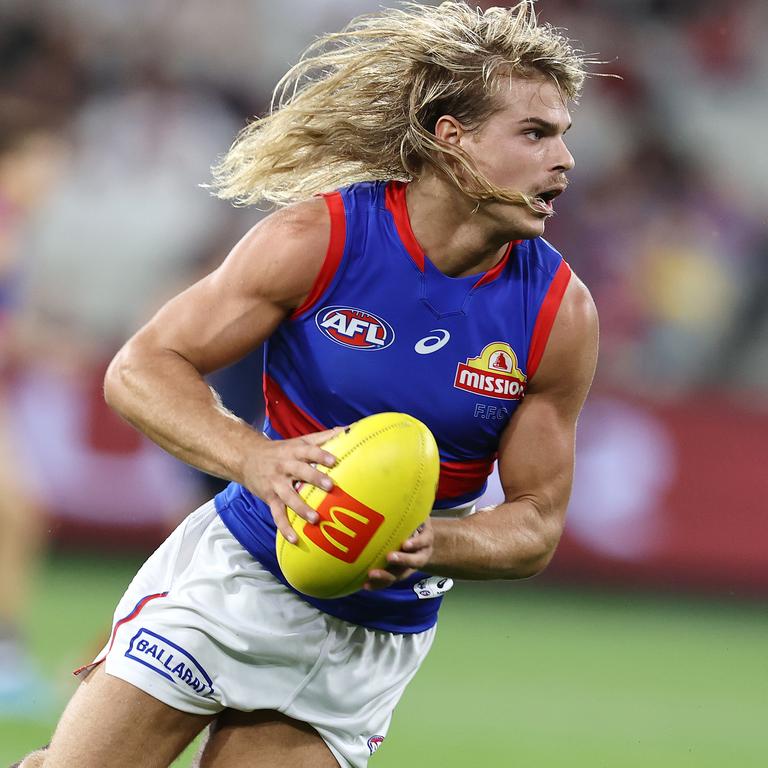 Bulldogs are wonderful to caricature, as are all dogs, and this one had to have a snarling edge to him. I remembered seeing dogs chasing cars as they drove by and most seemed to go for the front wheels. I wanted to show that this bulldog had plenty of bite, so I drew him with a large chunk of tyre between his jaws as he ran beside the Range Rover snarling away!

In these cartoons you can add little details that footy fans love. If you look closely you can see Max Gawn has small demon horns on his bald head and there is a wheel of brie cheese floating around in the back of the Ranger.

I was going to put a blonde mullet on the bulldog as an acknowledgment of Bailey Smith’s hairstyle … but I couldn’t be that cruel to an animal!

Thank heavens the footy’s back!