From swimming in a dam on his family farm in country Victoria to racing against the world’s best at the Paralympic Games in Tokyo.

It sounds too good to be true.

But not for Col Pearse – he’s about to become a Paralympian at just 17.

Pearse had his right foot amputated* when he was a toddler, following an accident with a lawnmower.

But he’s never let that loss get in the way of his dream.

This time last year he was swimming in a dam on his family’s farm near Echuca, on the border of Victoria and NSW. The dam was fitted with lane ropes, overhead flags and turning walls at either end.

That was between shifts of milking 500 cows and workouts in the garage gym. “I didn’t swim in the dam for no reason,” he joked.

“There were some cold mornings but it all paid off. I just had to make the most of a bad situation.

“When I was 14 I decided to chase this dream and make the move to Melbourne. For it to all pay off is a massive relief.

“I feel like there is a massive weight off my shoulders.”

In isolation with Col Pearse

Describing the past week as stressful would be an understatement*, according to Pearse, who was forced to watch the Australian Olympic trials from home.

Despite being given the opportunity to escape Melbourne before it was plunged into another lockdown, Pearse decided to stay put and focus on his year 12 studies.

He wasn’t required to attend the event in Adelaide because a ruling adopted* by Paralympics Australia and Swimming Australia meant Pearse’s best time in his pet event – the 100m butterfly, recorded at the national championships earlier this year – could be taken into account.

“I was fortunate enough to post a personal best which was under the qualifying* time,” he said.

“I thought my time would be strong enough but it was definitely hard … having to sit there and watch.

“It was a massive relief when the team announcement came through.”

He is now one of 32 swimmers who have been selected to compete in the Australian team at the Games later this year. 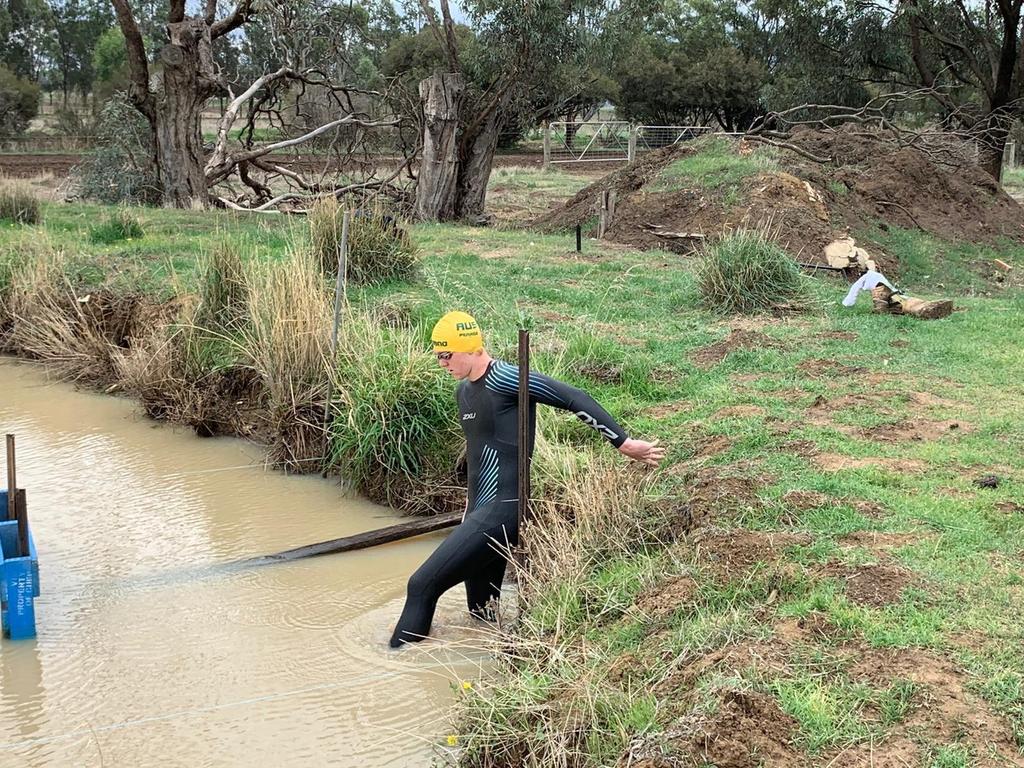 Col Pearse’s efforts in the dam last year have officially paid off, with the 17-year-old named in Australia’s Paralympic squad. Picture: supplied.

The athletes will soon enter a bubble in preparation for the moment in green and gold many of them have dreamt of for so long.

They’ll first head to NSW before a training camp on the Gold Coast.

Then 14 days of quarantine awaits in Tokyo, although they’ll be allowed to train during this time.

“I can’t wait to get to Japan,” Pearse said.

“After the disappointment of last year’s postponement* we’re really excited to get over there and show the world what we can do.”

Pearse has already proven himself as a future contender* on the international scene.

In 2019, he won a bronze medal at the World Para Swimming Championships in the 100m butterfly, breaking the Oceania* record in the process.

Pearse said his target would be the 100m fly but he hopes opportunities in other events will also come to fruition*.

The Paralympic Games will run from August 24 to September 5.

CLASSROOM ACTIVITIES
1. Overcoming Obstacles
Col Pearse has overcome a lot in his 17 years and still has plenty of things left that he wants to achieve. Many things in life worth doing don’t come easy, as Col has shown.

Create a three column table and below the matching heading, list the obstacles that Col has faced, how he overcame them and what strengths of character he showed to do this. See the example below.

Heading one: Obstacles he faced/or may face in the future

Training for Olympic events in a dam on a farm

Heading two: How he overcame them

Fitted the dam out with lane ropes, flags, and a turning wall to make it as similar as possible to a swimming pool.

2. Extension
The Olympics in Japan will be running a little differently than usual due to Covid restrictions on crowds and keeping teams in ‘bubbles’ etc. Explain in one paragraph how the strength of character Col has shown to get this far will help him be successful on his Olympic journey and life in general.

VCOP ACTIVITY
Stretch your sentence
Find a ‘who’ in the article. Write it down.