The all-rounder*’s score of 135 not out stunned Australia to record their biggest fourth innings run chase in 142 years of Test cricket.

Stokes and Jack Leach put on 76 for the ninth wicket to seal an incredible win and level the series at 1-1. Stokes scored 75 of those runs with Leach, as he hit eight sixes and 11 fours in a knock that left the Aussies shocked after England had been bowled out for just 67 on day two.

Stokes, who was lucky to survive a leg before wicket decision which TV replays showed should have been given out, said it was a day he will never forget.

“Walking off there at the end when the whole of Headingley was standing up and celebrating was a very special moment,” Stokes said.

“It was a bit of individual brilliance today from a world-class player. Stokes was playing out of his skin and he managed to do things that you normally wouldn’t see.

“I didn’t love it today but I love watching him play for that reason,” Paine said.

The series is now drawn at 1-1 with the fourth Test starting on September 4 at Old Trafford. Patty Mills of Australia controls the ball during match 2 against the USA. Picture: AAP

Heading into next month’s basketball World Cup in China, he says the Australian team has the talent to take the title.

Boomers star Patty Mills led Australia to a historic win over Team USA with 30 points, including 13 in the final quarter, to stun the Americans 98-94 in front of 52,079 fans at Melbourne’s Marvel Stadium on Saturday.

After being overrun in the second half of Thursday night’s opening match of the exhibition series, Australia was in danger of suffering a similar fate once Team USA built a 10-point lead midway through the third quarter. But the Boomers clawed their way back to lead heading into the final quarter and with the game on the line, Mills fired with 10 points in the final three minutes to secure the victory.

“It’s huge on many accounts,” Mills said about the significance of knocking off the world’s best basketball nation on home soil*.

Bogut said the win had given the team a huge confidence boost. 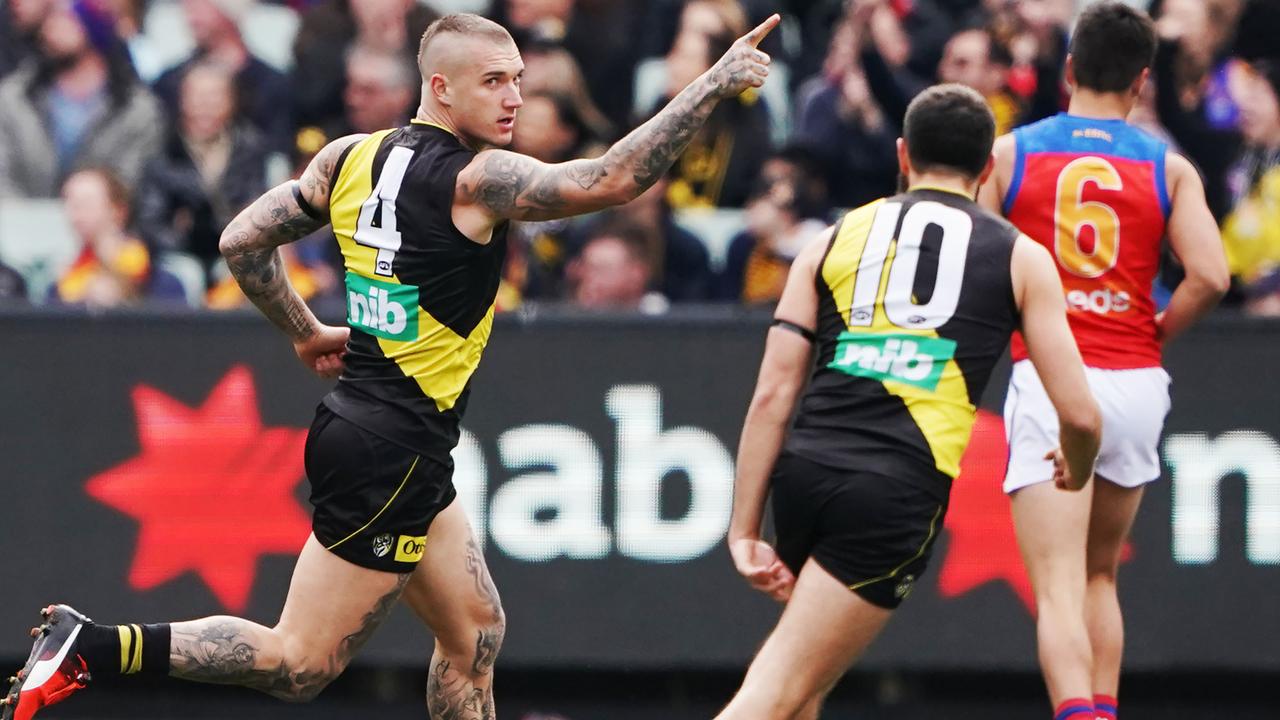 Dustin Martin of the Tigers celebrates a goal against the Lions yesterday. Picture: AAP

AFL: A visit to the “Gabbatoir*” holds no fear for Richmond after they beat Brisbane and branded themselves the in-form team with nine wins in a row leading into the AFL finals.

Sunday’s 12.10 (82) to 8.7 (55) victory means the Tigers finish third on the ladder and face the second-placed Lions at the Gabba in a mouth-watering qualifying-final rematch.

“I think we’ve got a really good record interstate compared to most other sides and our boys enjoy getting away together,” Tigers coach Damien Hardwick said. “We’ll approach the week pretty much stock-standard*, go up on the usual flight, train at the Gabba then hopefully run out and play some good footy.” McLaughlin has won 16 of 22 races this season and can break Lowndes’ record next month at his home track in New Zealand.

The 26-year-old is well placed to smash the record with another nine races left in the season. His 41st career victory moves him to sixth on the list of overall Supercars winners.

HAVE YOUR SAY: Who do you think will win The Ashes — Australia or England?
No one-word answers. Use full sentences to explain your thinking. No comments will show until approved by editors.