An iconic Wiggles dance has proven once again to be the secret weapon of Andrew Redmayne, whose Wiggly jig has helped secure the Socceroos’ place at the World Cup finals. Picture: news.com.au

A famous Wiggles dance has proven to be the secret weapon of substitute goalkeeper Andrew Redmayne, whose jig helped the Socceroos qualify for a fifth straight World Cup. There was plenty of air as Peru’s Andre Carrillo and Australia’s Nathaniel Atkinson contested the ball during the playoff match, but the score was locked at 0-0, triggering the sudden-death shootout. Picture: Joe Allison/Getty Images

Redmayne was brought on to replace captain Mat Ryan in the final minute of extra time by Socceroos coach Graham Arnold, with scores locked at 0-0 and the shootout in mind.

The move proved a masterstroke* by Arnold, who survived strong criticism during Australia’s rollercoaster qualifying campaign. 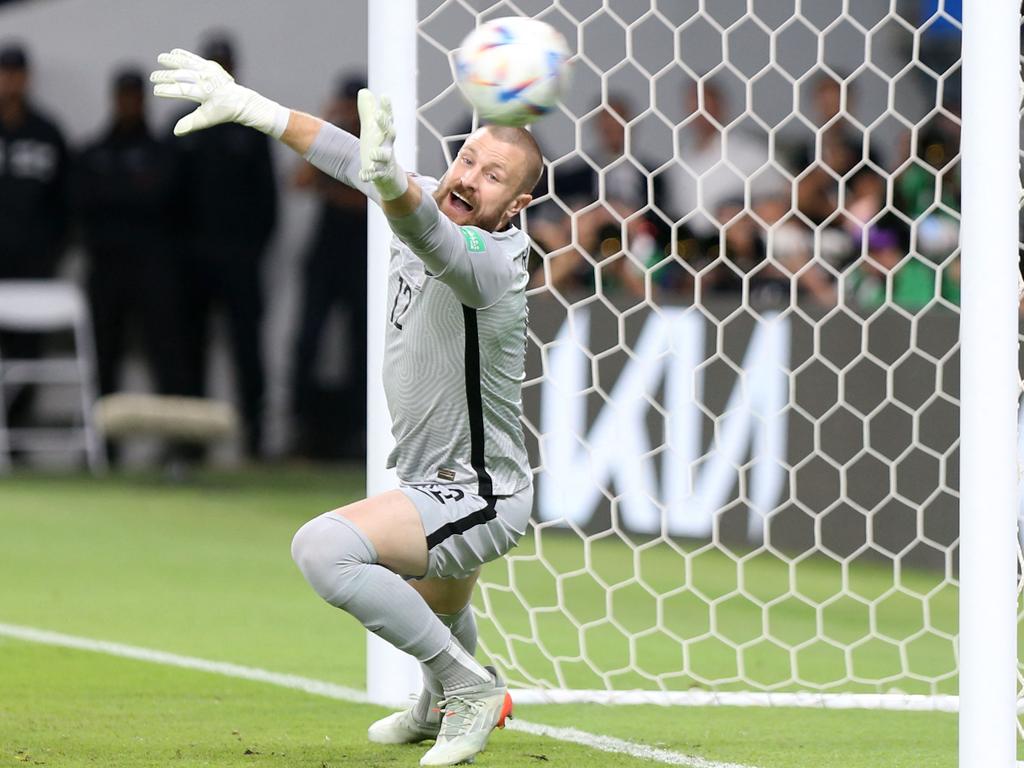 “I’m grateful for the other boys for running out 120 minutes,” the 33-year-old substitute keeper said. “I’m no hero. I just played my role like everyone else did tonight.”

But Redmayne, who is affectionately known as the “Grey Wiggle” for his Wiggles-like dance moves during shootouts, has become the favourite Socceroo of many sporting fans. Australia’s defender Aziz Behich celebrates with Redmayne after the Socceroos won the shootout 5-4 against Peru to advance to the World Cup. Picture: Mustafa Abumunes/AFP)

He did not disappoint despite the significance of the occasion, shuffling from side to side on both feet in an effort to distract the Peruvian penalty takers.

“This idea was floated preselection that this might kind of eventuate* in these circumstances,” he said on Channel 10. “For the two to three weeks we have been here I’ve kind of been having that in my mind.” 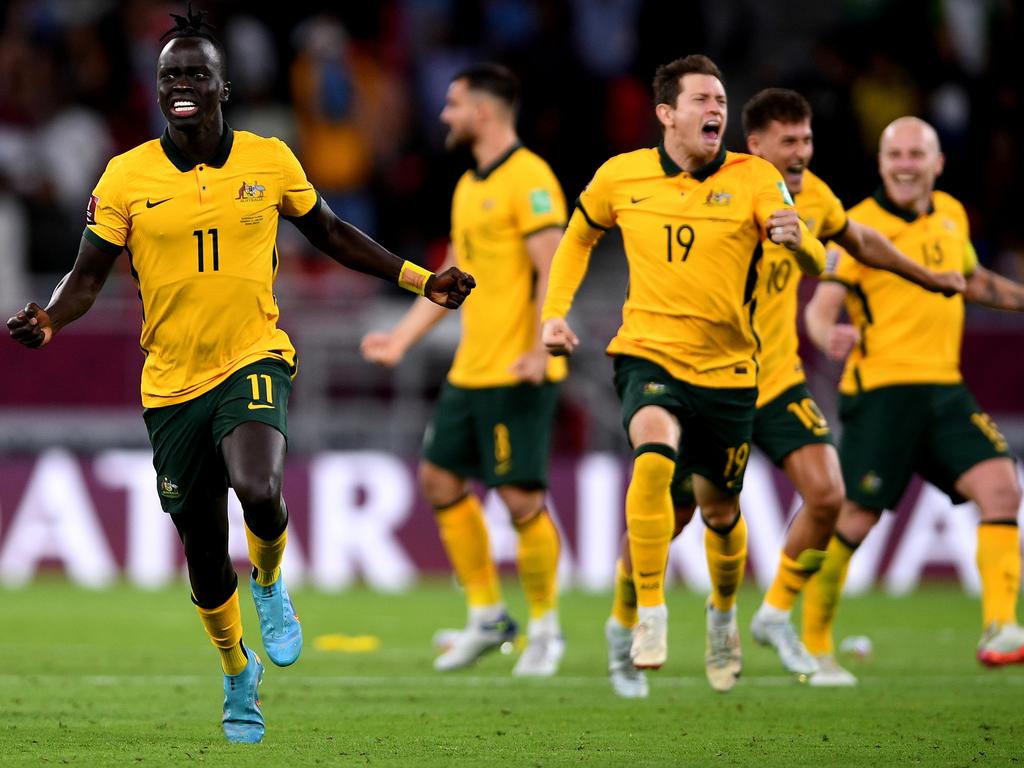 Australia’s Awer Mabil and the Socceroos erupt into emotional scenes of joy after defeating Peru in the 2022 FIFA World Cup playoff match against Peru at the Ahmad Bin Ali Stadium on June 13 in Doha, Qatar. Picture: Joe Allison/Getty Images

Former national keeper Mark Bosnich hailed Redmayne a “hero”, while one fan said he had etched himself into Australian sporting folklore* alongside Cathy Freeman, Mark Schwarzer and Don Bradman.

The shootout started badly for the Socceroos, with Martin Boyle having his spot kick saved by Peru’s captain and goalkeeper Pedro Gallese.

However, through Aaron Mooy, Craig Goodwin, Ajdin Hrustic, Jamie Maclaren and Awer Mabil, the Socceroos didn’t miss another penalty in a shootout that needed sudden-death to decide it. Redmayne finds himself in a Socceroos sandwich as his teammates rush to celebrate after Redmayne’s save delivers a defeat to Peru and a World Cup berth to Australia. Picture: Joe Allison/Getty Images)

The Socceroos got back into the shootout when Peru’s Luis Advinculla hit the post with a penalty that may have also got a touch from Redmayne.

Socceroos coach Arnold, whose job came under pressure after Australia failed to earn automatic World Cup qualification, said Redmayne was brought into the match for the penalty shootout to put Peru’s players off their game. 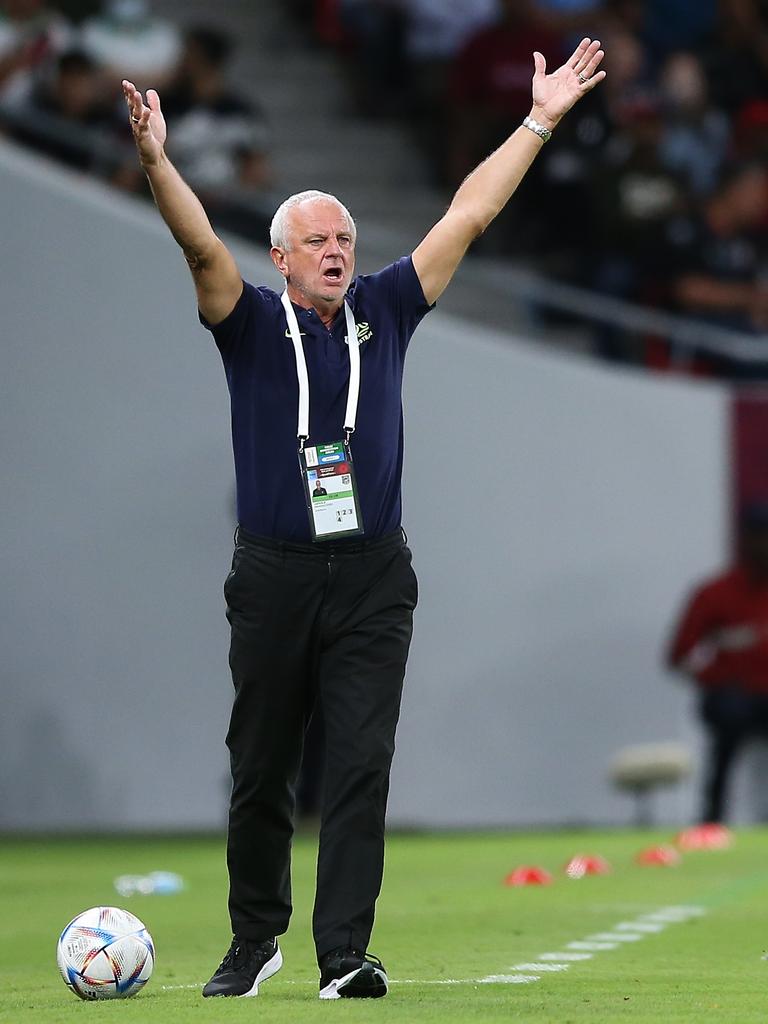 Head coach Graham Arnold has weathered heavy criticism during the Socceroos’ qualification campaign but his decision to bring on Redmayne has been hailed a masterstroke. Picture: Mohamed Farag/Getty Images

“Andrew Redmayne is a very good penalty saver,” Arnold said. “And to try and get into the mind, on the mental aspect for Peru – why are we making that change? To add that little bit of uncertainty in their brains.”

Australia will face World No. 3 France, Denmark and Tunisia in Group D of the World Cup.

CLASSROOM ACTIVITIES
1. Goalkeeper dance
Work with a friend and come up with your own moves/dance to save a goal to get Australia into the World Cup event as Andrew Redmayne did for the Australian team.

If your teacher allows, go outside to kick a soccer ball and see if you can stop the goal with your partner.

2. Extension
If you were the family (mum, dad, sister, brother) of Andrew Redmayne when he got sent out to save the match against Peru, describe what you think you would be seeing, hearing and feeling in that moment.

VCOP ACTIVITY
Exercise the body and the mind
Exercise is not only important for the body, but it’s a lot of fun as well. Let’s bring more exercise into classroom learning by creating a VCOP PE game.

You can add a VCOP challenge to pretty much any game and it’s a great way to encourage the teacher to let the class play more games.

VCOP dodgeball
The normal rules of dodgeball apply. Two teams throw soft balls at each other and if you get hit, you have to sit out. The team who knocks out all the players on the other team wins.

VCOP challenge
When you get eliminated, collect a mini-whiteboard and a basic clause from the sidelines. Up-level the sentence (make it better) by adding VCOP. When you show the teacher your completed sentence, you can return to the game.