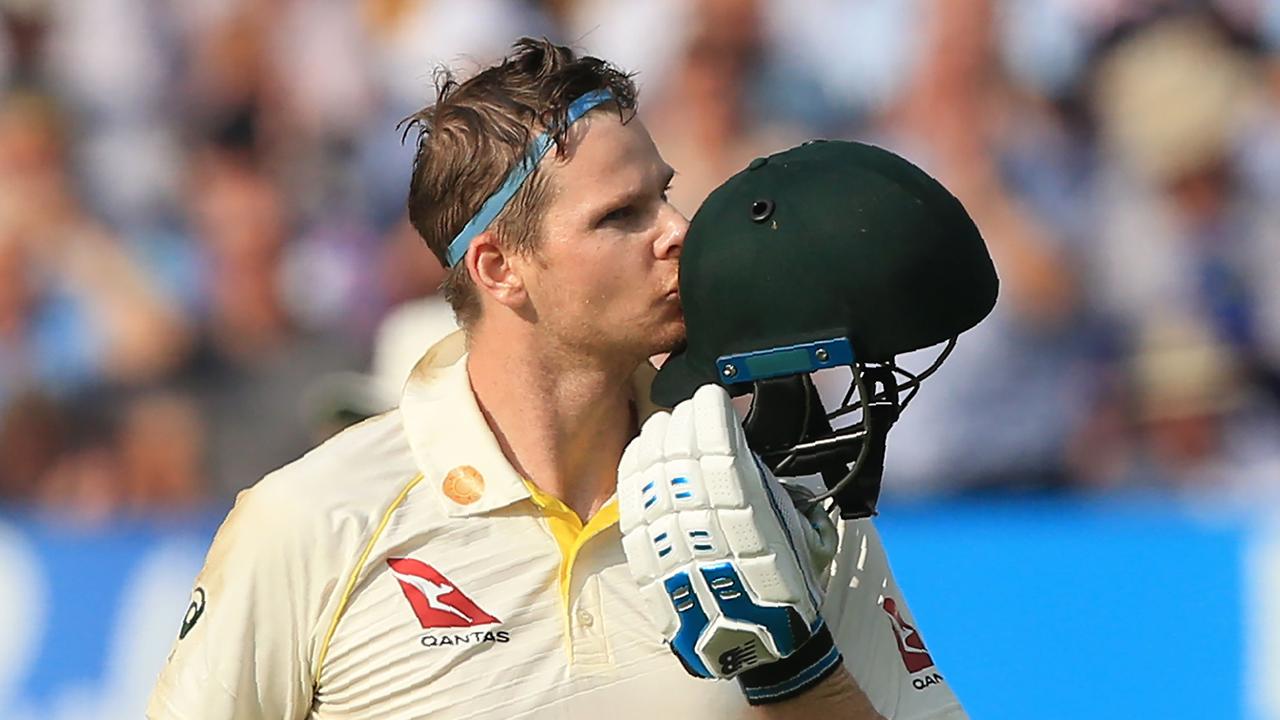 Steve Smith scored 144 on his return to Test cricket after a ban for ball-tampering* as Australia recovered from 8-122 to be 284 all out against England on the opening day of the Ashes series overnight.

England openers Rory Burns (4 not out) and Jason Roy (6 not out) survived two overs to reach stumps* at 10-0 in the first Test at Edgbaston in Birmingham.

Smith and Peter Siddle came to the rescue of Australia’s first innings with an 88-run partnership for the ninth wicket at Edgbaston, and Smith then shared 74 runs with Nathan Lyon (12 not out) for the last wicket in an extraordinary turnaround.

Smith was finally bowled while trying to smash a ball from English bowler Stuart Broad. The former Aussie captain’s brilliant 219-ball knock, which provided more than half his team’s runs, included two sixes and 16 fours. Steve Smith of Australia on his way to a century in the first Test. Picture: Getty Images

Siddle, who was selected for his bowling, hit a valuable 44 before he sent a delivery from offspinner Mooen Ali to Jos Buttler at short leg. England had reduced Australia to 8-154 at tea after the visitors chose to bat and reached 83-3 in overcast conditions at lunch. But Smith and Siddle started to dominate after tea.

Earlier, Australian openers David Warner and Cameron Bancroft, walked out to chants of “cheat, cheat, cheat,” with some England fans waving pieces of sandpaper. Bancroft was playing his first Test since a nine-month suspension for ball- tampering. He was banned along with Smith and Warner, both of whom were suspended for a year. The Kangaroos insist they searched widely for a coach before naming Shaw, despite him being the only candidate who formally presented to the selection panel.

Shaw, 37, agreed to terms with the Kangaroos on Wednesday to replace Brad Scott for at least the next three seasons.

The former Collingwood and Sydney player had impressed Kangaroos bosses during an eight-game period as acting coach.

North won four of the games under Shaw’s guidance, although they are on a three- match losing streak and will not play finals as they are in 14th spot.

“It (the coaching job) probably has happened a little quicker than I expected but I back myself in any situation,” Shaw said.

“I’ve been in the industry for 20 years now and I think I know it pretty well. I’m still learning each and every day and that’s the great thing about being a senior coach.” 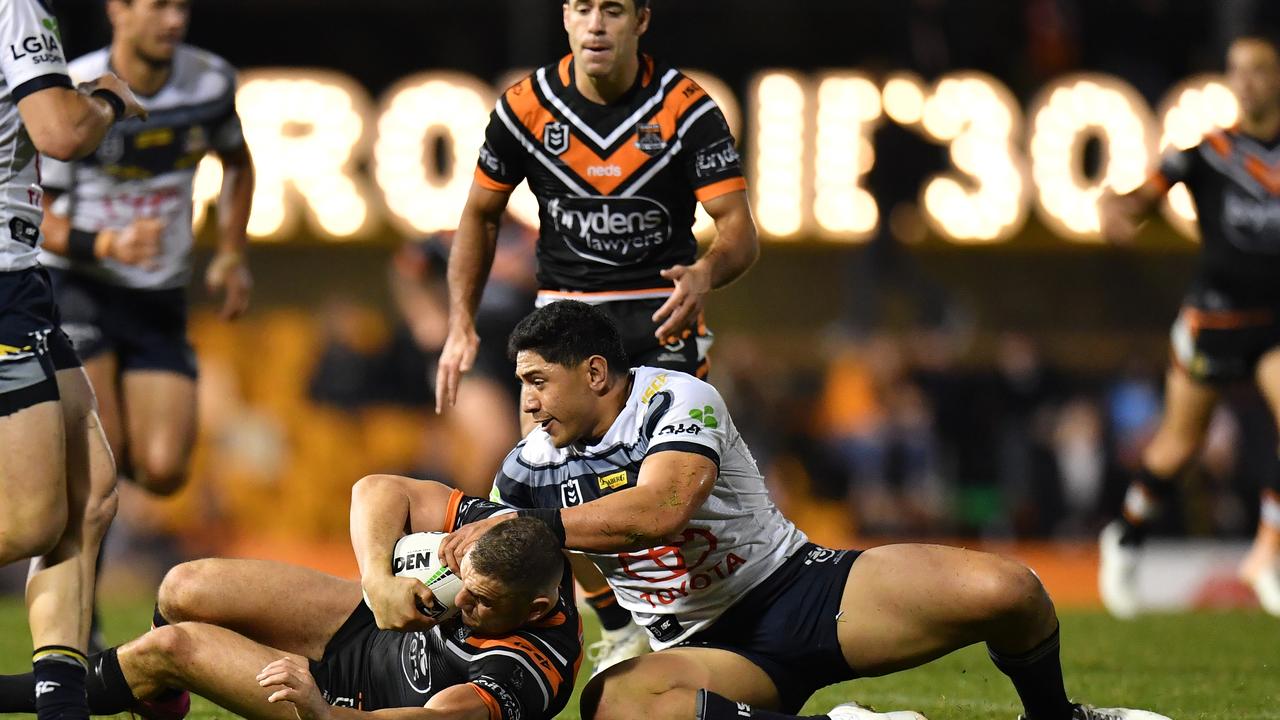 Robbie Farah of the Tigers is tackled by Jason Taumalolo of the Cowboys during the match which celebrated Farah’s 300th match. Picture: AAP

Before he retires from NRL, Robbie Farah is determined to return the Wests Tigers to the top eight and break the longest current finals drought in the NRL.

The Tigers took a big step towards playing in September with last night’s 28-4 defeat of North Queensland, which saw them skip into seventh spot.

The match was an emotional one for Farah, who announced his retirement earlier in the week and had more than 100 friends and family at Leichhardt Oval to mark his 300th match, which he played a week earlier.

When the 35-year-old crossed for a try after darting out of dummy-half in the first half the crowd broke into a “Robbie” chant, which he admits nearly brought him to tears. Australian swimmer Shayna Jack will face the anti-doping authority in a hearing today to fight for her sporting future after testing positive to a banned substance.

She is expected to argue that she mistakenly took the substance in a separate supplement but she needs to prove that fact to the Australian Sports Anti-Doping Authority.

ball-tampering: altering the ball illegally to gain an advantage

stumps: end of the day’s play

appointed: given a job

anti-doping: fighting against drugs in sport

How many runs did Steve Smith score?

Where is the first Test being played?

How many AFL teams did Rhyce Shaw play for?

What milestone was Robbie Farah celebrating?

Shayna Jack is facing a ban of how many years for testing positive to drugs?

The English fans were chanting “cheat, cheat, cheat” to the Aussie cricket players who were banned for ball tampering last year.

Think of a new positive chant the crowd could use to support the Australian players as they tackle England in the first Test. It should be short and catchy and make a point about the players have finished their bans and getting on with the job of representing their country.

Time: Allow 15 minutes for this activity

Split the class into two groups to form a debate on whether Australian swimmer Shayna Jack should or shouldn’t be banned for using drugs in sport.

Read the story and consider the arguments Jack’s defence team or the ASADA bosses are likely to use. You should come up with at least three ideas to support your stance.

Hold a debate with your teacher deciding which team wins with the most convincing argument.

Time: Allow 40 minutes for this activity

HAVE YOUR SAY: How do you think the booing from English cricket fans would make Steve Smith, David Warner and Cameron Bancroft feel?