Australia’s Rhiannan Iffland has soared into history, jumping from the famous Mostar Bridge in Bosnia and Herzegovina into a river 21m below to make her the most successful woman in cliff diving.

After making a splash with an unexpected win in 2016 — her first ever cliff diving competition — the 27-year-old from Port Macquarie in NSW has gone on to win the Red Bull Cliff Diving World Series every year since.

She now has four consecutive* world titles to her name. Rhiannon Iffland is just a tiny dot as she dives from the bridge at Mostar in Bosnia and Herzegovina. Picture: Red Bull via Getty Images

Iffland pulled off a perfect final dive on Saturday before a crowd of 20,000 that scored her a 10 out of 10 from each of the four judges.

Iffland and her fellow competitors had to jump off the Stari Most, or Mostar Bridge, from a platform 21m above the Neretva River. The water below has a depth of only 20m, so it is considered quite dangerous.

The bridge was built in the 16th century, but had to be rebuilt between 1993 and 2004 after it was destroyed during the Croat — Bosniak war*. 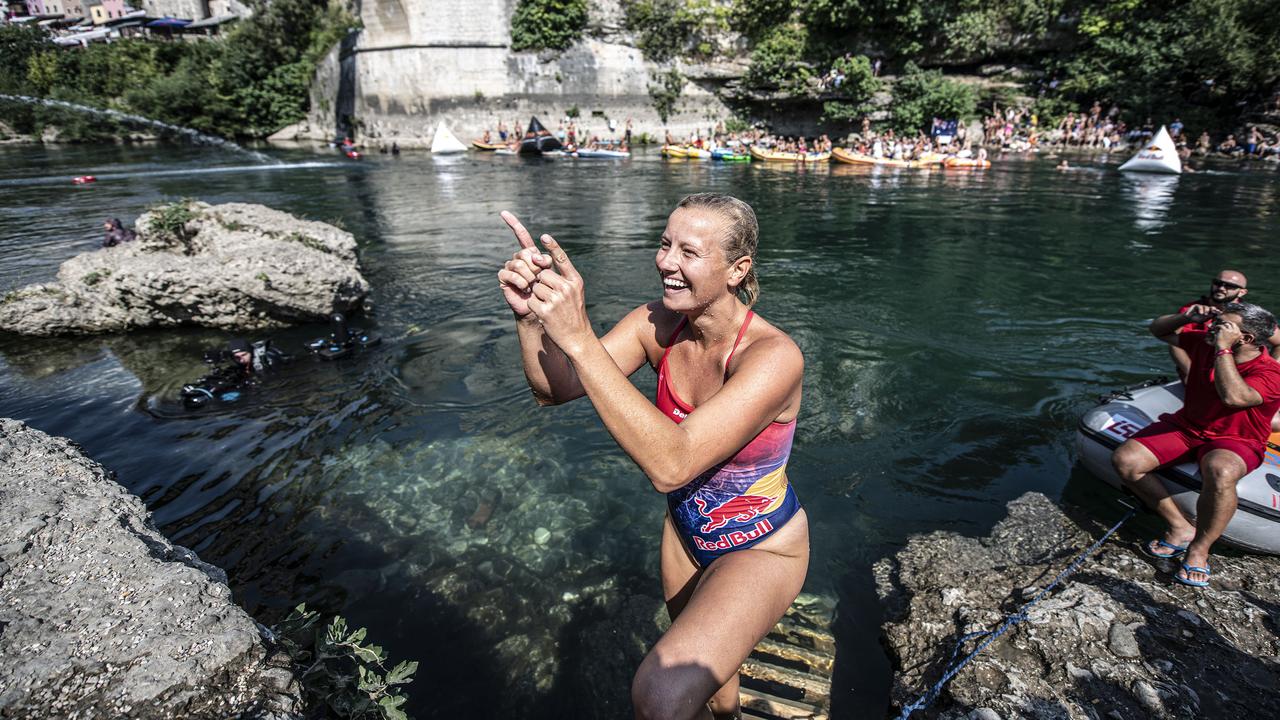 It is a diving location that has proved difficult for Iffland in the past, with injuries preventing her from winning here.

But she said she was able to put those demons behind her to come out with a victory.

“I tried to come in here with a different mental attitude to the last few years,” Iffland said. “The previous years it’s been tough for me; I don’t have a very good track record here. I’ve struggled with injuries and I always feel a little intimidated when I’m standing on the platform. But I was just trying to stay mentally strong and overcome these challenges and those negative thoughts.”

Despite there being one more event in the series — which will be held at Bilbao in Spain on September 14 — Iffland’s performance was enough to officially secure her the title.

Iffland also won the FINA High Diving World Cup last November, taking her tally* to 11 wins in 17 events, and has only twice finished outside the top three.

After Saturday’s win, Iffland is now just one win away from conquering* all of the seven cliff diving competition venues of 2019.

2. Extension
Cliff diving is not a high-profile sport, even though we have the world champion. Imagine that you are the new president of the Australian Cliff Diving Association. Think of things that you could do to make Australians get excited about cliff diving. Write a list and add details explaining how each item will help to make this happen.

VCOP ACTIVITY
The Power of Positive Thinking
In the article, Rhiannan said “I always feel a little intimidated when I’m standing on the platform. But I was just trying to stay mentally strong and overcome these challenges and those negative thoughts.”

How you feel mentally has a huge effect on what you can achieve. A lot of the time we are held back by mental fears, not physical ones. It could be the fear of making a mistake, upsetting someone or potentially embarrassing yourself etc.

But when you are confident and think positively, you are a lot more relaxed and willing to give things a go. Taking safe risks, when you push yourself to try things you are not confident in but are capable of, are important, they help us grow and develop our skills.

It could be adding higher level vocabulary to your writing, when you know you will struggle to spell them. Or having a go at the running race, when you know someone is usually faster than you. You push yourself to give it a go.

When have you taken a safe risk and used positive thinking to help you try your best? Tell us about your experience.

If you haven’t pushed yourself, why not? What’s stopping you?

You will need to use emotive language to explain how you are feeling, or how others might have felt in your experience.

HAVE YOUR SAY: Would you be brave enough to dive from a 21m platform?
No one-word answers. Use full sentences to explain your thinking. No comments will show until approved by editors.