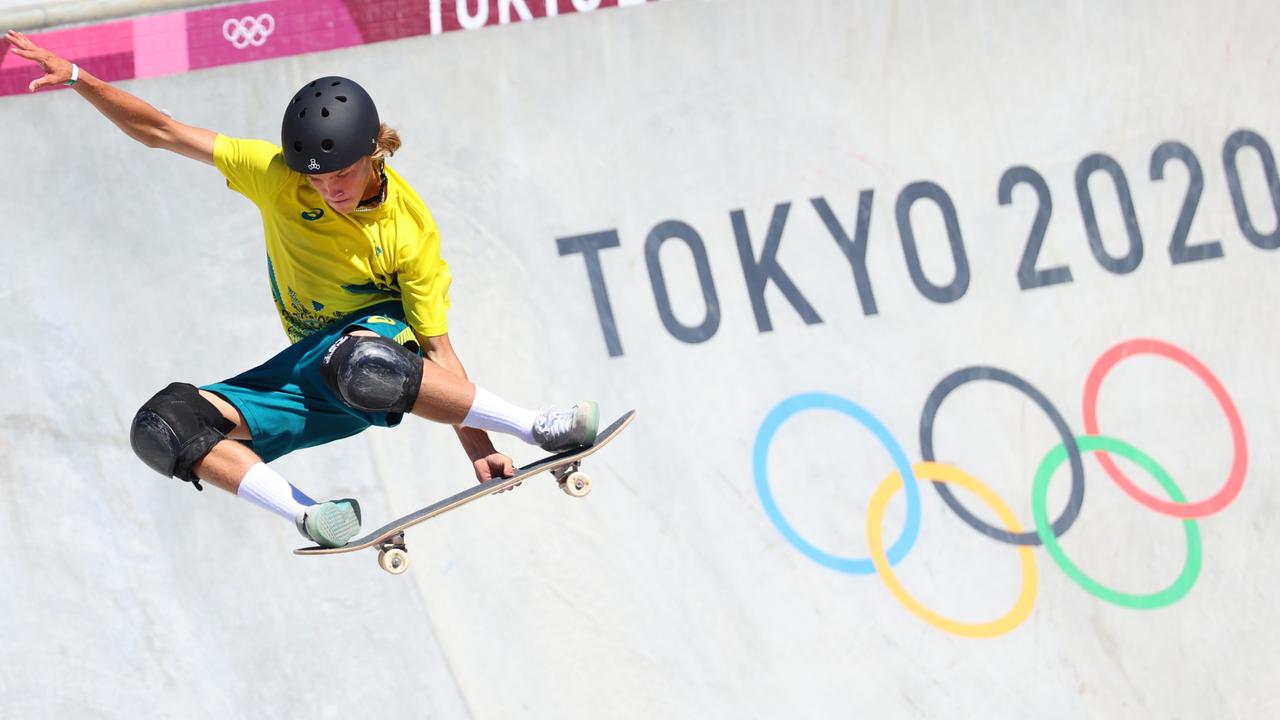 Skateboarder Keegan Palmer has won Australia’s first Olympic skateboarding medal, with his gold in the men’s park competition taking our tally to a record equalling 17.

The Tokyo Games has delivered our biggest gold medal haul since the 2004 Athens Olympics, where we also took home 17 gold.

But with more athletes still in with a shot at gold in the final days of competition, Tokyo could become our most successful Games ever.

Palmer, 18, came into the men’s park event final ranked fifth, but shot to the front when he delivered an amazing first run score of 94.04. He backed that up with a 95.83 on his final run. The rest of the field was not even close, with Brazil’s Pedro Barros claiming silver with a score of 86.14 and Cory Juneau from the US taking bronze with 84.13.

Palmer, who was born in the US but raised in Australia, was destined for skating success from a young age. He first stepping on a skateboard at the age of two.

By six he’d flourished* at his first competition and at nine he knew he could turn it into a career after winning the Australian bowl-riding championships – prompting his family to move from Currumbin on the Gold Coast to the world’s skating mecca of San Diego in the US four years ago.

Palmer came into the Olympics ranked seventh in the world and was a dark horse* in the men’s park event, having not competed on the global circuit for months because of the Covid-19 pandemic.

“It’s a huge honour and I’m so grateful to bring gold back to Australia,” he said after his historic win.

“It means the world to me because it’s where everything started for me. I’m so grateful and I just can’t believe it.” 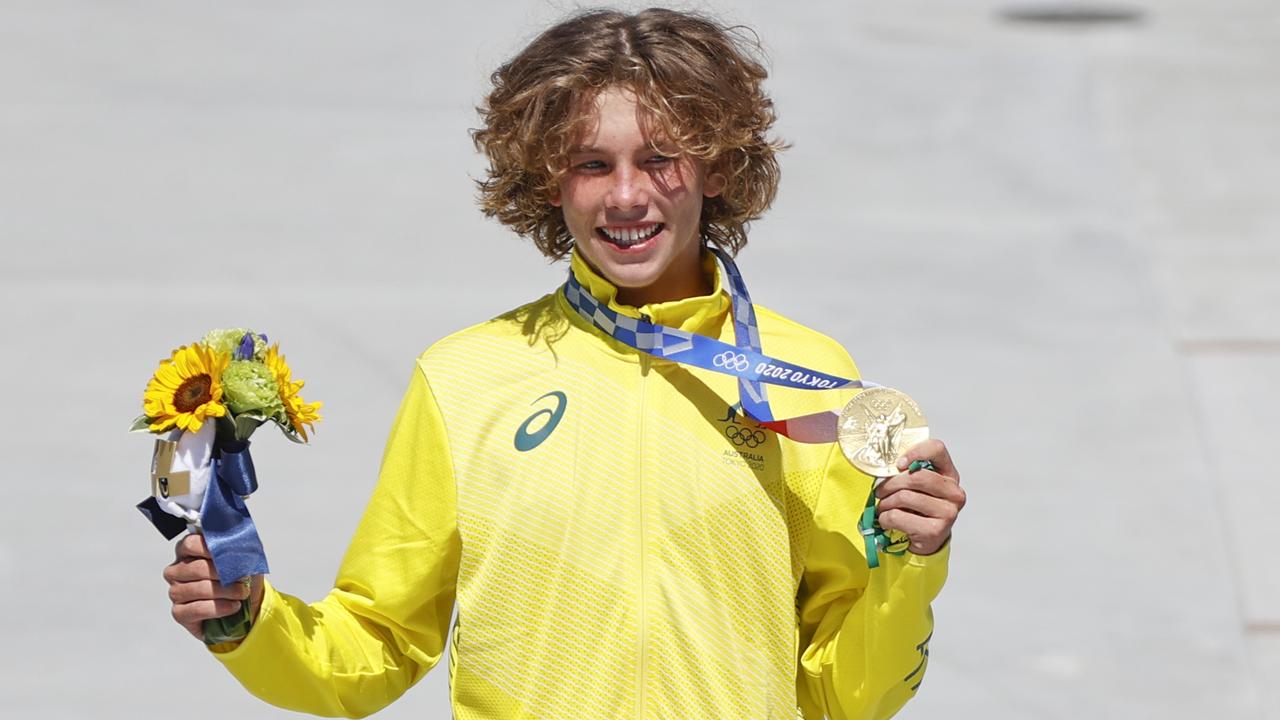 While he now lives in the US, Palmer is a dual citizen of America and Australia but remains loyal to the green and gold.

“It’s where all the hard work happened, the blood, sweat and tears. I had to bring it home for Australia.”

Palmer’s skateboarding medal in the sport’s Olympic debut* was the second gold for Australia on day 13 of competition.

Young Aussie stars Tom Green and Jean van der Westhuyzen pulled off a surprise win when they held off a fast-finishing German team. 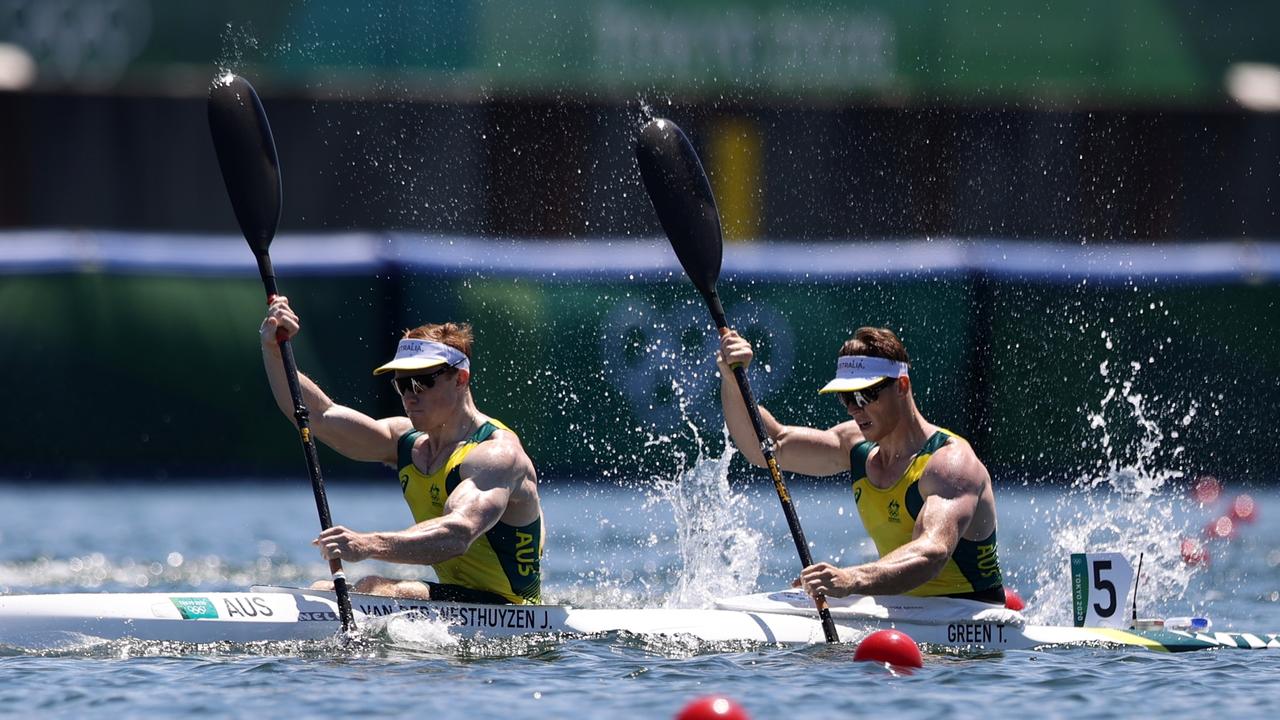 Jean van der Westhuyzen and Tom Green in action on their way to a gold medal in the men’s K2 1000m. Picture: Getty Images

Green and van der Westhuyzen, best mates from the Gold Coast, powered their kayak over the line in 3min 15.28sec, just .304 of a second ahead of Germany.

The decathlon is a gruelling* event which see competitors do 10 events over two days.

It is the first time Australia has won an Olympic decathlon medal. The previous best finish by an Australian was Peter Mullins who finished sixth at the 1948 Olympics in London. Australian Ash Moloney throws the javelin as part of his bronze medal performance in the decathlon. Picture: Getty Images

Flipping out over new Olympic sports

CLASSROOM ACTIVITIES
1. Interview With a Medallist
What a performance from Keegan Palmer! Imagine you are a sports presenter covering the Olympics and are given the task of interviewing Keegan following his medal winning performance. Make a list of questions you would ask.

2. Extension
What interview questions would you ask fellow Australian skateboarder Kieran Woolley who finished fifth in the men’s park event? Remember to show sensitivity in your questioning in case he is feeling disappointed with his result.

VCOP ACTIVITY
Acrostic Poem
Think of a word that you associate with the Olympics (for example, athlete, medal, compete, glory, Tokyo, Olympics etc.) and create an acrostic poem to share about the Tokyo Olympic Games. Try and include varied words throughout your poem to maintain the interest of the reader.