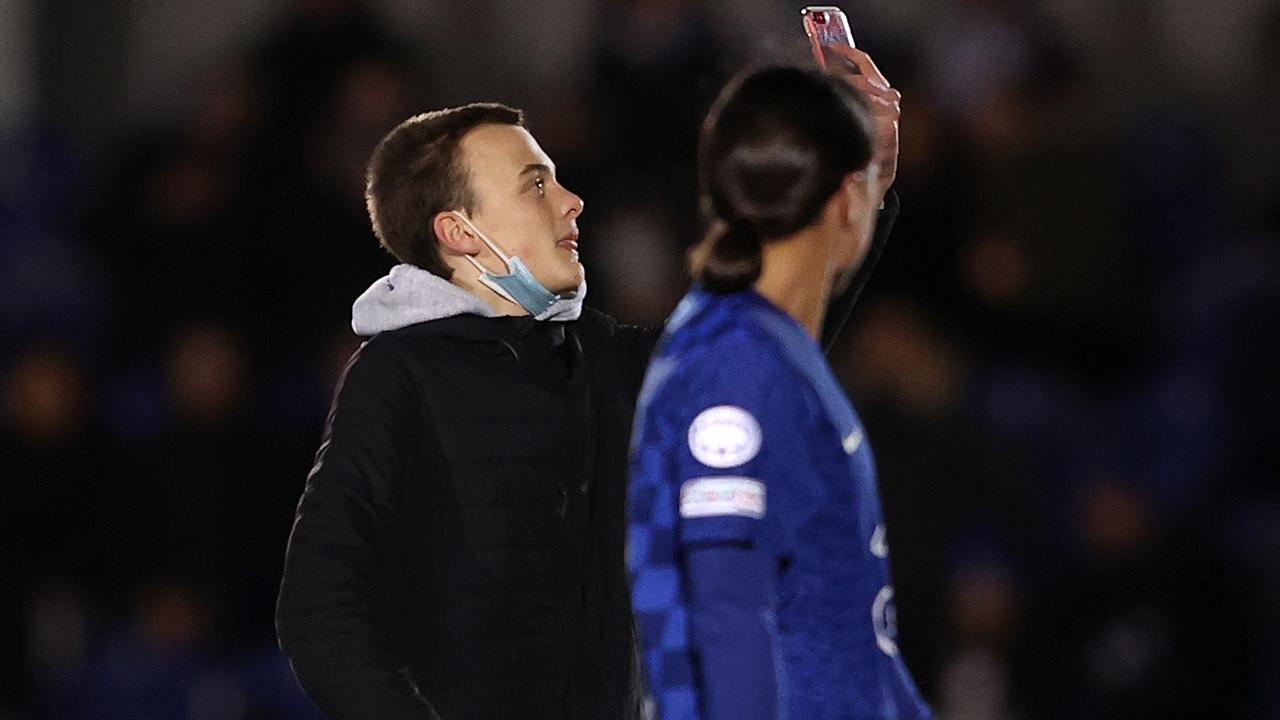 The pitch invader takes a selfie in front of Sam Kerr before the Australian soccer star lines him up and bumps him over. Picture: Getty Images

Australian soccer superstar Sam Kerr has taken out a pitch invader* in England in the most Australian of ways.

The Matildas captain, who is currently playing with UK team Chelsea, greeted the invader with a no-nonsense shoulder bump that would have made plenty of AFL players proud.

While the result wasn’t great for the overeager fan, it was worse for Kerr, who was given a yellow card by the referee for knocking him over. Sam Kerr gives the pitch invader an AFL-style hip and shoulder bump during the match between her team, Chelsea, and Italian team Juventus on December 8. Picture: Getty Images

Video from inside the ground shows Kerr, whose brother Daniel was a premiership player for the West Coast Eagles in the AFL, lined up the invader who was strutting around the ground taking selfies during Chelsea’s match against Italian team Juventus.

Kerr’s bump drew cheers from the crowd but incensed* the referee who showed the star striker a yellow card as the embarrassed fan got to his feet and was finally chased off the ground by security guards.

Yellow cards are warnings given by referees to a player who has broken the rules or engaged in misconduct*. While fans in the stands and on social media cheered Sam Kerr’s bump on the pitch invader, referee Sara Persson was not amused and issued a yellow card. Picture: PA Images via Getty Images

Chelsea manager Emma Hayes said: “I don’t know why he didn’t wait to the end, he could have got a picture then.

“In all seriousness, we’ve got to think about player welfare and safety.”

Kerr’s bump came towards the end of the UEFA Women’s Champions League group A match between Chelsea and Juventus on December 8. The match ended in a scoreless draw.

Social media lit up as Kerr brought back memories of former Australian cricketer Andrew Symonds’ famous bump on a streaker* who ran onto the ground during a one-day international match against India at the Gabba in Brisbane in 2008. 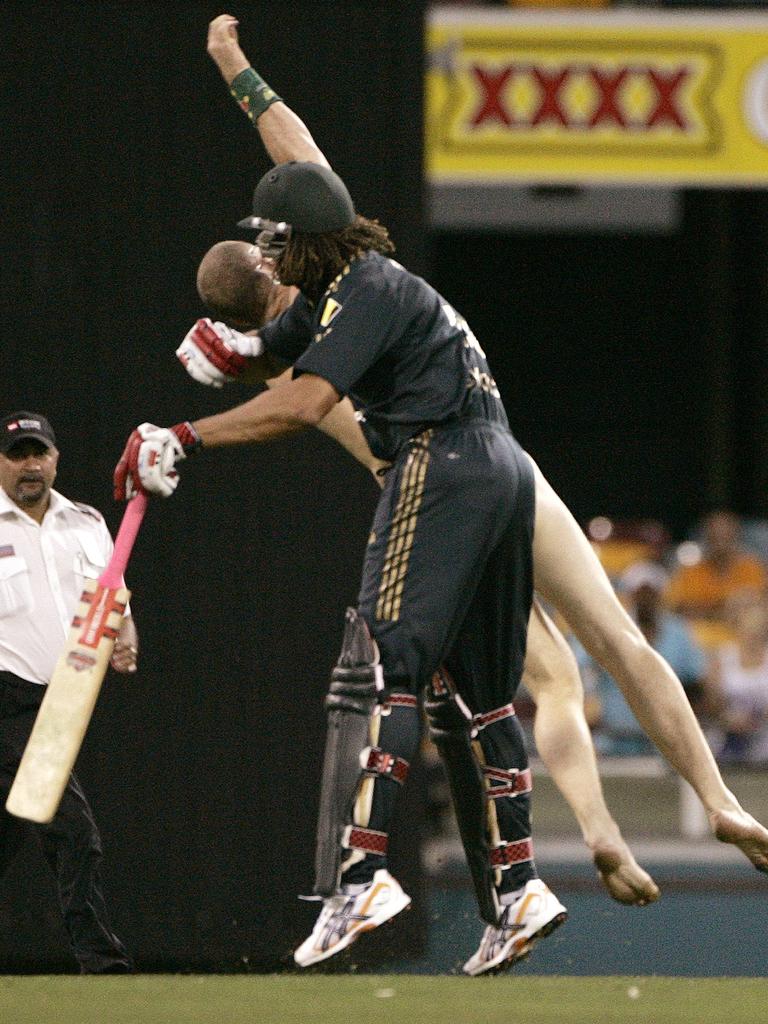 Australian cricketer Andrew Symonds gave a bump to a streaker who invaded the Gabba pitch during a 2008 match between Australia and India. Picture: AP Photo

English sports journalist Molly Hudson tweeted: “I have never seen that at a women’s game … Pitch invader, Sam Kerr pushes him over and gets a yellow card. Bizarre.”

Football reporter Adam Millington wrote: “In case you needed it, even more information that Sam Kerr is an absolute legend. Probably her best moment of the past week.”

While the referee wasn’t impressed with Kerr’s actions, former cricketer Symonds said pitch invaders lacked respect for the athletes on the field and he urged Kerr to “keep being herself”.

“She seems passionate and is admired widely. If she wasn’t a cult figure* already, she certainly will be now. Good for her,” he said.

CLASSROOM ACTIVITIES
1. Questioning the participants
Wouldn’t you love to know more from the point of view from the participants in this incident!? Write down three questions each that you would ask the pitch invader, Sam Kerr and the referee if you had the opportunity to interview them.

2. Extension
Find out about and write a short explanation of how the penalty card system in soccer operates.

VCOP ACTIVITY
Yellow card or not?
What do you think about Sam Kerr’s reaction to the field invader? Was she right to bump him, given that security would have likely tackled him as he ran across the ground? Was she just protecting the players and umpires? Or did she deserve the yellow card given for misconduct?

Write a letter to the umpire’s association or Sam herself sharing your opinions. Remember to use emotive language to emphasis your opinions so that the reader is convinced by your point of view.

Re-read over your work to ensure it is clear, and use your VCOP to up-level your work and create a strong writer’s voice.