Park of Mark Knight’s cartoon on Eddie Betts being traded back to Carlton.

AFL trade* week is a big event in the national football competition.

It is where clubs can trade players to other clubs for other players they’re looking for or receive draft picks* in the national draft where they will be trying to grab a future football star that will help win their club a premiership*.

Players can also put themselves up to be traded. The talks are intense* between clubs, coaches, recruiters* and player managers.

When I was reading about what was going on in this week, I realised the swapping of players and fierce negotiations* reminded me of my days as a schoolboy and the trading of footy cards that went on in the playground. The similarity was amazing! 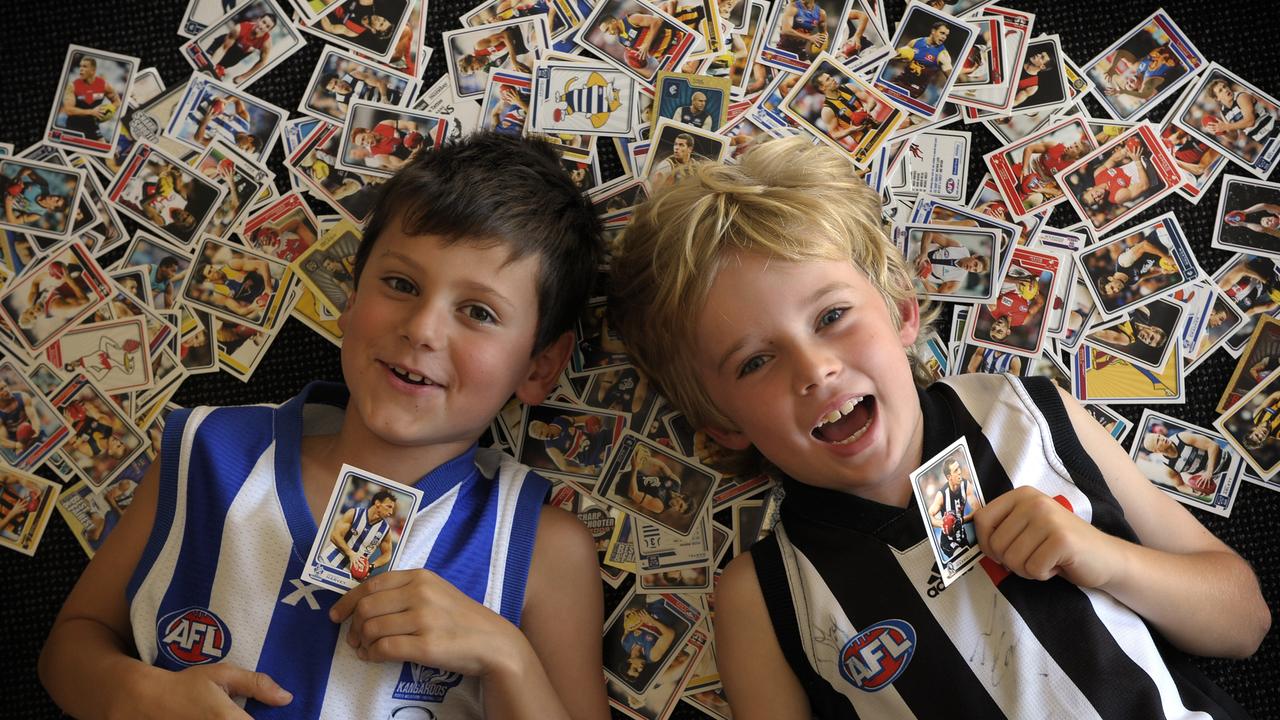 Thomas and Macca with a collection of footy cards.

You would buy packs of football cards — as you still can now from milk bars or newsagents — and build up your collection.

There were always the special cards that were hard to get, or the cards with the best players on them that were the ones you wanted most. If you had two of these very desirable cards you were able to trade and negotiate with your school friends and maybe pick up three or four cards you didn’t have in exchange for your one Gary Ablett or Buddy Franklin card!

And if the going got tough you could sweeten the deal with a few sticks of chewing gum that came in the pack.

Keeping this similarity in mind I decided to draw a cartoon about the star indigenous* Adelaide forward Eddie Betts being traded back to his former club Carlton. It was one of the biggest player movements during the trade period and Carlton supporters were thrilled about Betts returning to the Blues after six years at the Crows. Eddie Betts back at the Carlton Football Club after signing a one-year contract. Picture: AAP

But how would I draw it using the schoolyard idea?

Well, first I set the scene, starting with a schoolyard and a classroom in the background. I thought the person who would be most excited by the Eddie Betts trade would be the new Carlton coach David Teague, so I decided he would be the student in the playground with the footy cards. He is young, wears glasses, and would convert* well into a school kid. I drew him in a school uniform complete with school tie (top button undone) shorts and school bag backpack. He looked the part!

Mark Knight’s cartoon on the Eddie Betts AFL trade. Right-click on the image to open new tab and view the cartoon full-screen. Remembering back to my days swapping cards at school I wanted to capture the emotion I would feel when I came into the possession of a really popular card. The excitement and that expression that said, “WOAH … look what I’ve just scored!”
I was certain the Carlton coach would have felt the same about Eddie Betts’ return.

So I drew David Teague as the schoolboy, standing there in a deserted* playground, holding his collection of footy cards in one hand and the new Eddie Betts card in the other.

He is gobsmacked!* He can’t move. The EDDIE BETTS card is his! Nothing else matters …

To complete the school scene, a teacher — completely clueless as to the amazing event that has just happened — is calling Master* Teague urgently to class! Class matters, I guess.

Mark Knight: Protesting extinction as old as the dinosaurs

However, Mark’s cartoon was drawn with an adult audience in mind and he knows that most people who look at it will also have read and watched a lot of news stories about the AFL trade period and know who Eddie Betts is.

People look at his cartoon with the help of a lot of background knowledge.

HAVE YOUR SAY: Are swap cards allowed at your school?
No one-word answers. Use full sentences to explain your thinking. No comments will show until approved by editors.