US runner Isaiah Jewett and Nijel Amos of Botswana pick each other up after falling during the men's 800m semi-final at the Tokyo Olympic Games. Picture: Getty Images

Wow, what a Games! The postponed 2020 Tokyo Olympics were certainly worth the wait.

We saw some amazing gold medal moments – including many involving Australia – along with inspirational efforts, epic* displays of determination and heartwarming examples of kindness from the world’s most competitive athletes.

A surfer jumping in to translate* for the rival who’d just beaten him. High-jumping friends agreeing to share a gold medal rather than move to a tie-breaker. Two runners falling in a tangle of legs and then helping each other to the finish line.

Acts of kindness were everywhere at these extraordinary Olympic Games. Athletes were captured showing gentleness and warmth to one another – celebrating, pep-talking* and wiping away one another’s tears of disappointment.

Japanese surfer Kanoa Igarashi was disappointed when he lost to Brazilian Italo Ferreira in their sport’s Olympic debut*. Japanese surfer Kanoa Igarashi did not let his disappointment of missing out on gold stop him from helping winner Italo Ferreira during a media conference. Picture: Getty Images

He could have stewed* in silence at blowing his shot at gold on the beach where he grew up surfing, but instead he used his knowledge of Portuguese to help translate a press conference question for Ferreira on the world stage.

“Yes, thank you, Kanoa,” said a beaming Ferreira, who is learning English. Days later, at the Olympic Stadium, Gianmarco Tamberi of Italy and Mutaz Barshim of Qatar found themselves in a situation they’d talked about but never experienced – they were tied.

Both high jumpers were perfect until the bar was set to the Olympic-record height of 2.39m. Each missed that height three times and could not be split.

They could have gone to a jump-off*, but instead decided to share the gold. 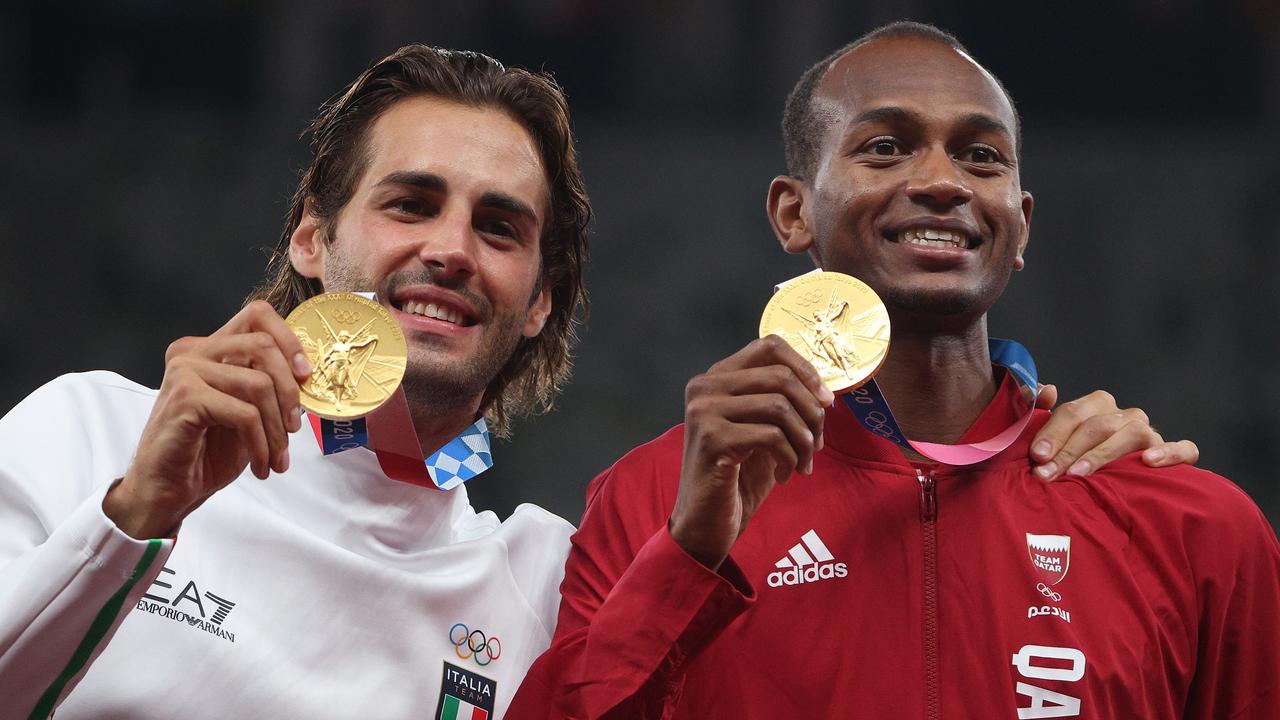 “I know for a fact that for the performance I did, I deserve that gold. He did the same thing, so I know he deserved that gold,” Barshim said.

“This is beyond sport. This is the message we deliver to the young generation.”

After they decided, Tamberi slapped Barshim’s hand and jumped into his arms.

“Sharing with a friend is even more beautiful,” Tamberi said. “It was just magical.” Earlier at the Olympic Stadium, runners Isaiah Jewett of the US and Nijel Amos of Botswana got tangled and fell during the 800m semi-finals.

Rather than get angry, they helped each other to their feet, put their arms around each other and finished together. US runner Isaiah Jewett and Botswana’s Nijel Amos fall to the track while competing in the men’s 800m semi-finals. Picture: AFP 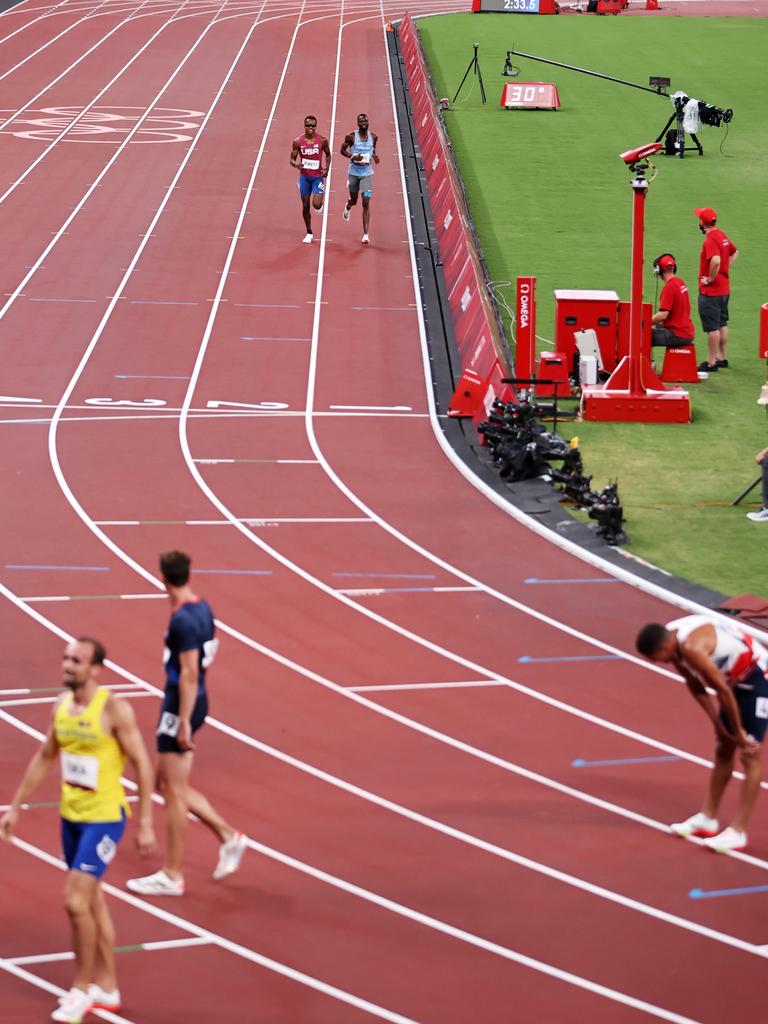 Many top athletes come to know each other from their time on the road competing, experiencing sporting career moments that can be the best or worst of their lives.

But restrictions designed to prevent the spread of Covid-19 at the Tokyo Games have meant Olympians can’t mingle the way they normally do.

After a hard-fought, three-set victory in the beach volleyball round-robin final, Brazilian Rebecca Cavalcanti playfully poured a bottle of water on American Kelly Claes’ back as she did post-game interviews. The US team had just defeated Brazil but the winners laughed it off, explaining that they were friends.

“I’m excited when quarantine’s done so we can sit at the same table and go to dinner with them. But it’s kind of hard in a bubble because we have to be away,” said Claes’ teammate, Sarah Sponcil.

After the punishing* women’s triathlon, Norwegian Lotte Miller, who placed 24th, took a moment to give a pep talk to Belgium’s Claire Michel, who was inconsolable* and slumped on the ground, sobbing. Belgium’s Claire Michel competes in the triathlon. She was disappointed to finish last in the event but her determination to finish impressed her Norwegian opponent Lotte Miller. Picture: Getty Images

Michel had come in last, 15 minutes behind winner Flora Duffy of Bermuda – but at least she finished. Fifty-four athletes started the race but 20 were either lapped or dropped out.

“This is Olympic spirit, and you’ve got it 100 per cent,” Miller told Michel.

Last but not least, Australia’s Ash Moloney took bronze in the decathlon but might not have done it without his teammate, Cedric Dubler. Dubler, who was suffering a hamstring injury, ran beside Moloney and encouraged him to the line in the final event of the 10 events contested in the decathlon, the 1500m.

Moloney was third going into the final event, just 62 points ahead of the fourth-placed athlete, and he needed a strong performance in the 1500m to cement his position on the medal podium.

Dubler was no chance of a medal by the time the 1500m was held, so he dedicated his race to motivating Moloney and helping him keep pace.

Dubler could be seen yelling encouragement as he ran alongside his young teammate, who ended up running a personal best time of 4min 39.19sec and scored enough points to confirm his third place.

“He had me worried for a little bit, then I just started screaming at him and we got him there,” Dubler told Channel 7 after the race. Ash Moloney celebrates with Cedric Dubler after securing the bronze medal in the decathlon with a personal best time in the 1500m. Picture: Getty Images

Moloney revealed just how important Dubler was in getting him the bronze medal.

“I started hitting a wall at 800m and I was a bit concerned but I was like, ‘Just stick to Cedric. Don’t let him get too far away’. He screamed … like a nutter,” Moloney said.

“He has been able to help Ash mentally and now physically right to the end,” McAvaney said.

Manou added: “He has been fabulous. He sacrificed his own event here just to help his teammate.”

CLASSROOM ACTIVITIES
1. A Beginner’s Guide
Create a “Beginner’s Guide” to decathlon. Assume that the person reading your guide knows absolutely nothing about the sport. You will need to tell them details such as: the aim of the sport, the equipment required, the type of field or arena where the sport is held, the most important rules and how the winner is determined.

VCOP ACTIVITY
Olympic Poem
Imagine you are an athlete about to compete, or who has just competed in their Olympic event. Write a description of the scene in a poem to explain your experience.

Or, you can use ‘show don’t tell’ to describe each of the senses.