The Australian team celebrates victory and retaining the Ashes during day five of the fourth Test. Picture: Getty Images

Australia has retained* the Ashes on British soil for the first time in 18 years.

Australia will leave England holding the urn* after another miraculous Ashes day at Old Trafford gave them an unbeatable 2-1 lead in a stunning series which will end next week at The Oval. Man of the match Steve Smith of Australia souvenired one of the stumps after Australia retained the Ashes against England. Picture: Getty Images

Australia only needed eight wickets when the day began, but England batted well enough to take the game to the final hour on day five.

Overton immediately called for an umpiring review but was ruled out leading to joyous Australian celebrations.

“That feels amazing to know the urn is coming home,” man of the match Steve Smith, who helped set up the victory with batting scores of 211 and 82, said.

“It was always one I wanted to tick off my bucket list*, to get the urn over here. It’s extremely satisfying. AFL: Collingwood star Jordan De Goey has flown to Germany to see a hamstring specialist in a last-ditch bid to return for the AFL Grand Final.

De Goey lasted just 48 seconds into Friday night’s qualifying final win against Geelong as he felt his injured leg in his first tackle of the night.

Collingwood has a week off before the preliminary finals, along with Richmond after the Tigers defeated the Brisbane Lions at the Gabba.

The West Coast Eagles defeated Essendon and will meet the Cats in a semi-final at the MCG on Friday night.

GWS, which sent the Western Bulldogs out of the finals, will travel north to take on the Lions in a knockout semi-final at the Gabba on Saturday night.

In other AFL news, Essendon bosses have confirmed John Worsfold will continue to coach the Bombers in 2020. 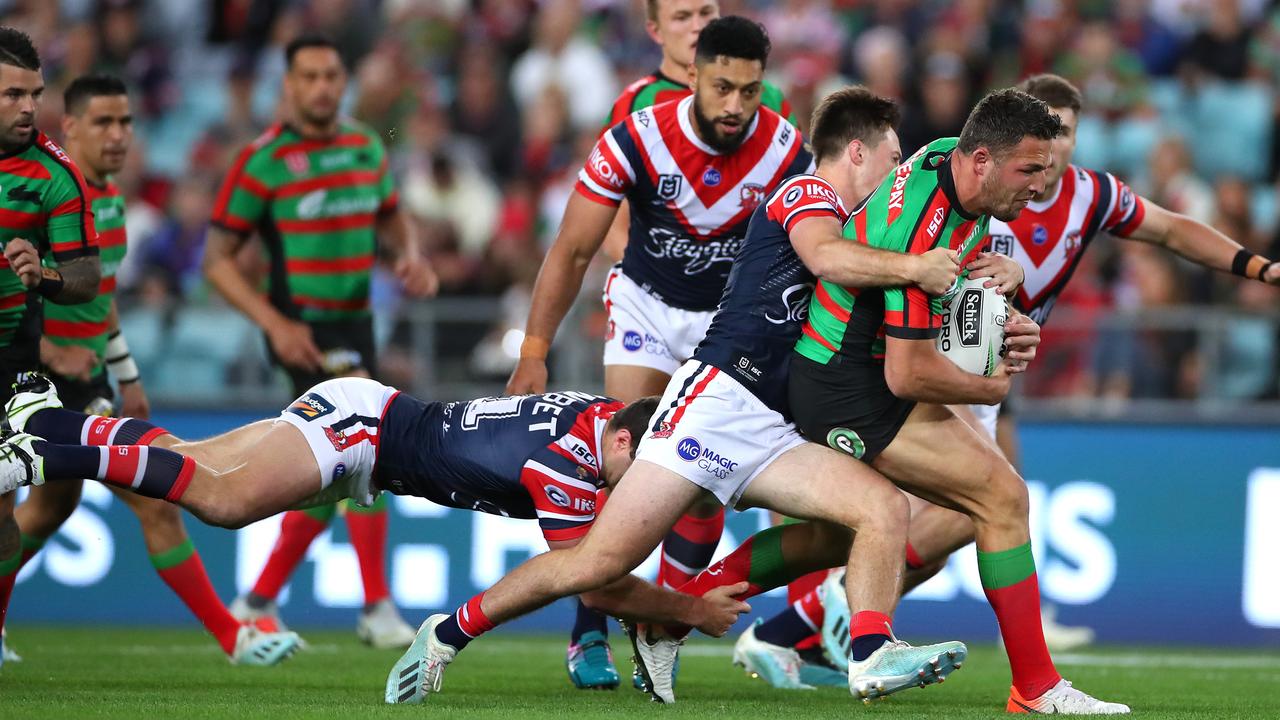 Sam Burgess of the Rabbitohs is tackled by Sydney Roosters players. The teams will meet again in the first week of the finals. Picture: Getty Images

NRL: One of the fiercest rivalries in the NRL will launch the NRL finals series at the SCG when the Sydney Roosters and South Sydney clash next Friday night — the first finals match at the SCG since 1987.

The Raiders’ shock loss to the Warriors on Saturday was massive, leaving them to face a trip south to tackle minor premiers Melbourne at AAMI Park on Saturday.

Despite their defeat, the Green Machine will travel to Melbourne with confidence, having beaten the Storm at home only four weeks ago.

A bruised and battered Manly side will host the Sharks on Saturday night at Brookvale’s Lottoland, but the venue is in question after the discovery of traces of asbestos* on the hill.

And the Brisbane Broncos will play the Parramatta Eels in a historic first semi-final in front of a sold-out 30,000 crowd at the newly built Bankwest Stadium on Sunday afternoon.

CLASSROOM ACTIVITIES
1. Retaining the Ashes
It has been a tough and controversial 12 months for the Australian cricket team leading into this Ashes series.

Write a list of adjectives describing the mixed emotions you think the Australian team members would be feeling after retaining the Ashes in the wake of the ball-tampering scandal in South Africa a year ago which led to three players being suspended (all of whom have gone on to play in this series on their returns — Steve Smith, David Warner and Cameron Bancroft).

2. Extension
You have been named the person responsible for making a speech to congratulate the Australian team.

As you write, think of five key points you would like to make about the team’s performance in the Ashes series. Consider commenting on things including sportsmanship, attitude, sporting performances, leadership and inspiration.

Deliver your speech to your classroom.

HAVE YOUR SAY: Are you pleased Australia has retained the Ashes? Explain why.
No one-word answers. Use full sentences to explain your thinking. No comments will show until approved by editors.