Figure skater Harley Windsor will rewrite history when he becomes Australia’s first indigenous athlete to compete at a Winter Games next year.

Windsor was named in the Games team on Thursday and will join new Australian citizen Ekaterina Alexandrovskaya in Pyeongchang in February in the pairs event.

Australia has had 51 indigenous athletes pull on the green and gold* at the Summer Olympic Games but Windsor said it would be an honour to be the nation’s first indigenous Winter Olympic athlete. 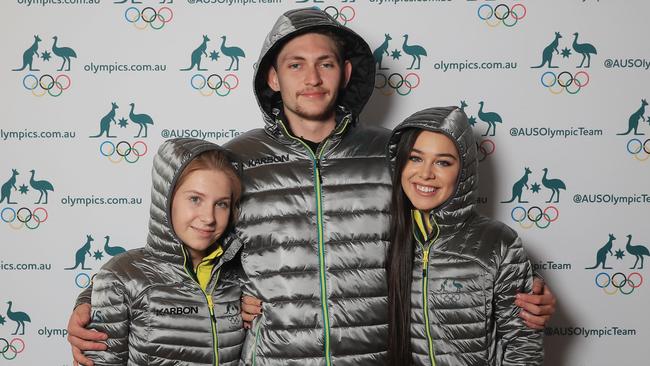 “It hasn’t completely sunk in yet but it feels like an amazing and mind-blowing accomplishment to have been named as Australia’s first indigenous Winter Olympian,” said the 21-year-old who grew up in Rooty Hill in Sydney.

“I grew up in the Aboriginal community and have always been around Aboriginal culture so it’s been a huge part of my life and something that I’m very proud of.”

Windsor is hoping his selection will inspire other indigenous Australians just as he was inspired by fellow indigenous trailblazers throughout his youth. Harley and Ekaterina compete at the World Figure Skating Championships in Helsinki.

“I was a massive supporter of Cathy Freeman and how hard she worked to achieve what she achieved.

“I hope I can give other young indigenous athletes some inspiration that they are able to get to the highest level in Winter Olympic sports just like we’ve done in Summer sports.

“I hope I can continue to push forward and give them someone to look up to.”

The duo’s selections have been confirmed alongside fellow figure skaters Brendan Kerry and Kailani Craine, who will compete individually.

The quartet* are the first confirmed Australian team selections for the Games, with Kerry the only with Olympic experience.

“To be honest, at first, I didn’t know it was going to go so well,” Windsor said.

“But as we started skating more and more together, we started to figure each other out a bit more. “I think it worked so well because she’s a bit more fiery and I’m a bit more calm, so it kind of balances out.”

Australian Chef de Mission* Ian Chesterman has witnessed the rise of winter sports in Australia, having led the Winter Olympic Team at the past six Games, and knows this is a landmark moment for indigenous Australians as well as winter sports.

“Having Harley on the Team, as Australia’s first indigenous Winter Olympian is of huge significance,” Chesterman said.

“It reflects the increasing growth of Winter Sports across all Australian states and territories.”

Chef de Mission: person in charge of the Olympic team

Read through the article carefully to find out all you can about Harley Windsor.

Write a short biography about him.

Include how old he is, where he grew up, his sporting achievements, what is significant about his selection on the Winter Olympic Team, his hopes for the future and anything else you feel is significant.

Harley Windsor wants to be an inspiration to other young indigenous athletes.

What attributes would Harley need to exhibit to be a positive role model for other indigenous athletes?

Make a list of attributes that a positive role model should display.

Many other indigenous athletes have represented Australia in other sports,
Choose an indigenous sporting hero and do some research on their life and achievements. Present the information you find out in a poster.

Extension: Winter sports on the up

The article states that Australian Chef de Mission Ian Chesterman has witnessed the rise of winter sports in Australia.

Why do you think that winter sports have not been traditionally as popular in Australia as summer sports in the past?

Why do you think this has changed in the past few years?

WOMEN PICK UP THE WHISTLE