How Dusty could help AFL players keep their distance Mark Knight’s cartoon on how the AFL players will return to playing and continue to follow COVID-19 health guidelines.

What could be worse than being locked down in your home for two months due to COVID-19?

The answer: Being locked down with no footy to watch!

This week there was a small light at the end of the coronavirus tunnel when the AFL announced they were going to restart their season. Games would be played to empty stadiums, but they would be broadcast*.

At last, some sport to watch on the television for sports-mad Australians!

It was going to be tough though being a national competition, with a lot of restrictions on movement and personal freedoms still in place throughout Australia.

This was a big a story and obviously a good subject for my daily cartoon. While the AFL and the sporting media were busy debating how and where teams would play due to some state borders being closed, I started thinking about how they would play a contact sport in these times of social distancing! Maybe it would be tip footy?

When I heard that the first game might be a blockbuster* match between Collingwood and current Premiers Richmond, I started thinking about some of the players in those two sides. There are a lot of stars. One player that does stand out though and he is a delight to draw is Dustin Martin from the Richmond Tigers. Covered head-to-toe in tattoos, a mohawk haircut, a twin premiership player with Norm Smith best-on-ground medallions as well as a Brownlow Medal, there is a lot to work with! I love to draw Dusty. He takes about five minutes to sketch and then another hour to fill in all his tattoos.

And that’s when I got an idea for a cartoon on AFL football being played under coronavirus restrictions. 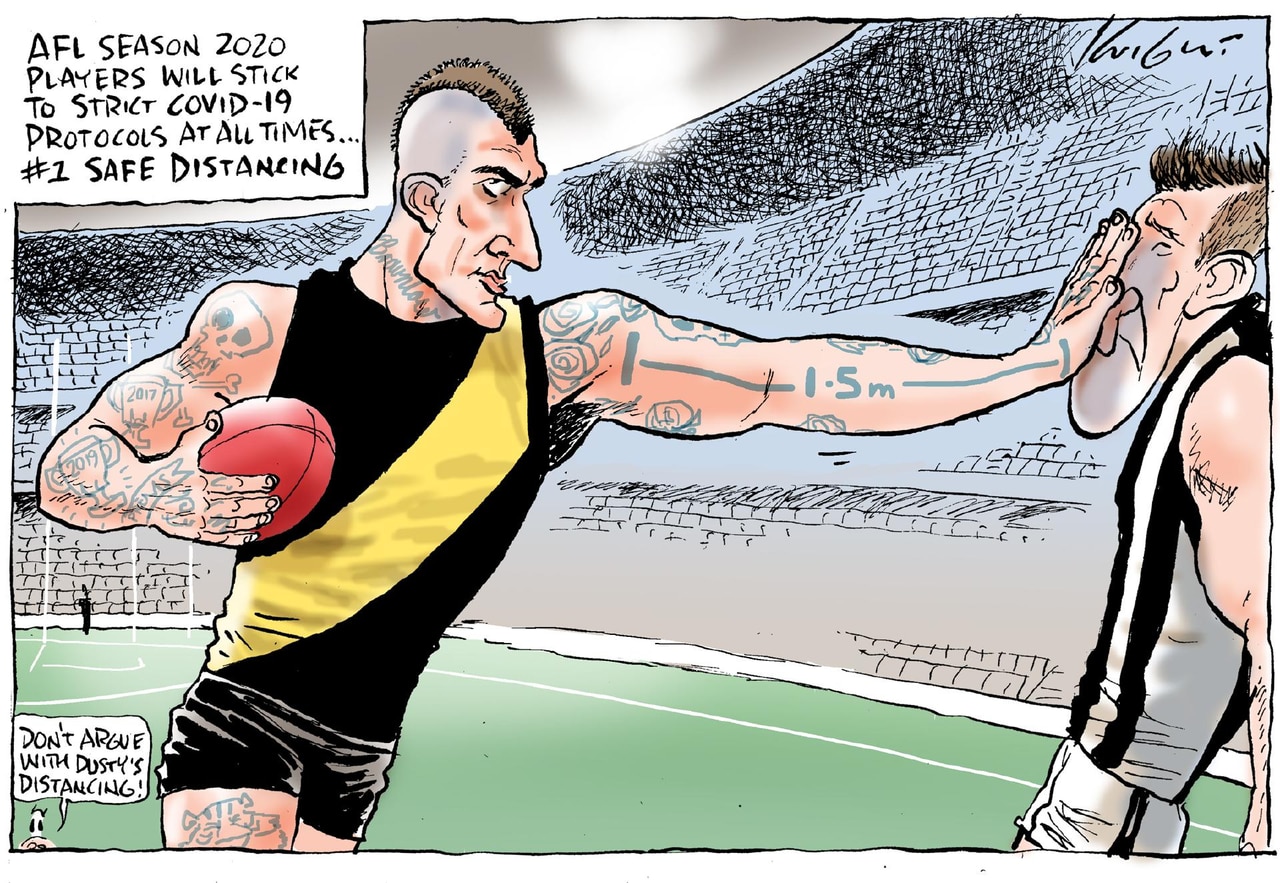 One of Dustin Martin’s signature moves on the footy field is the “Don’t argue”. It’s the old-fashioned fend* off where a player running with the ball puts their arm out and with the palm of their hand pushes the opposing player trying to tackle them away.

Dusty does it frequently and the crowd loves it. When he puts his arm out, it’s about 1.5m long and it just so happens that this is the “social distancing” length we are told to keep from other people when we are out. Who’d have thought Dustin Martin was just practising social distancing all these years?!

So I drew Dusty on the MCG running with the ball, his arm stretched out fending off a Magpies player who is trying to tackle him. The idea came to life.

But I’m never happy, I wanted to add something else. I thought I could put his tatts to use. When I draw him I’m always having fun with creating new imaginary tattoos for Dusty. So instead of all his tattoos of skulls and roses on his outstretched arm, I would create a tattoo that added to the idea of the cartoon. That tattoo would be a line measure marking 1.5m distance. Perfect! I was now happy with the drawing.

And I hope Dusty is happy with his new social distancing tattoo!

broadcast: communicated to lots of people, on TV, radio or the internet

fend: defend oneself from attack

Coughing over the health of Australia’s piggybank

Coronavirus restrictions to ease across Australia

NRL and AFL clubs vote to play on

What colour ball are they using?

What is the third person in the scene there for?

Which team does Dustin Martin play for?

What do you notice about the stadium in the background?

CLASSROOM ACTIVITIES
1. What would they say?
Cartoonist Mark Knight has written a caption on this cartoon and we can see what the pig is saying with the little speech bubble down the bottom.

What do you think the players are thinking or saying?

Read Mark’s explanation of what the cartoon means again and write two, three or four short sentences, just to make sure you understand what issue or situation the cartoon is discussing.

Using your sentences to help you, write a speech or thought bubble for each player that will make Mark’s meaning clearer for children or people who haven’t been reading the news this week.

HAVE YOUR SAY: How, when and where do you think AFL should be played this year?
No one-word answers. Use full sentences to explain your thinking. No comments will be published until approved by editors.