Football gun Michaela Togias will fly to Manchester, England, in January to showcase her footballing talent. Michaela was scouted by the Manchester United and Manchester City Academy Scouts at a Global Football Network showcase she recently attended in Sydney. Picture: Jonathan Ng

After catching the eye of English Premier League Academy scouts*, one Sydney girl will fly to the UK to show off her football skills on the world stage.

Michaela Togias, 10, will travel to Manchester in January to take part in a tournament* where she will play against some of the biggest clubs, putting her hard work and dedication* to the sport on display.

Manchester United and Manchester City scouts watched her at the Global Football Network showcase* in Sydney in April, which involved seven hours of training over two days.

Players aged 10 to 19 came together to flaunt their skills in the hope of being offered a sporting scholarship*. Football gun Michaela Togias at Nott Oval in Narellan. Michaela will be flying to Manchester in January to showcase her footballing talent after being scouted by the Manchester United and Manchester City Academy Scouts at a Global Football Network showcase she recently attended. Picture: Jonathan Ng

“There were 60 girls at the showcase and I was a little nervous because I was the youngest and smallest there, but I just gave it my all and had fun,” Michaela said.

“At the end of the showcase the scouts asked to speak to my mum and told her that I have what it takes to play in the UK.

“Hearing that from them put a big smile on my face.”

Being a huge Tottenham Hotspurs* fan, Michaela – from Sydney’s southwest – follows the English Premier League from afar and has always dreamt of playing abroad.

She said that one day she hopes to wear the green and gold and represent her country as a Matilda and looks up to the likes of Sam Kerr and England Captain Harry Kane.

“To think that in a few months’ time I’ll be playing in the UK is like a dream come true,” Michaela said. Michaela is a big Tottenham Hotspur fan. Hotspur striker Harry Kane – the current English captain – vies for the ball during a friendly football match against Italy’s AS Roma on 30 July. Picture: Jack Guez/AFP

“I hope to one day make my country proud, just like Sam Kerr and Ellie Carpenter.

“I have great coaches who push me to play at my best, I train hard every day and put my all into every training session and game.”

With the FIFA Women’s World Cup on home soil in 2023 and women’s football growing in popularity and participation around the world, Michaela said she was excited to see what the future holds for the sport.

She added that she was so grateful for the support of her family and friends, showcase organisers Global Football Network, her coaches at Macarthur Rams, Futboltec and her sprint coach, Australian Olympian Hayley Butler. 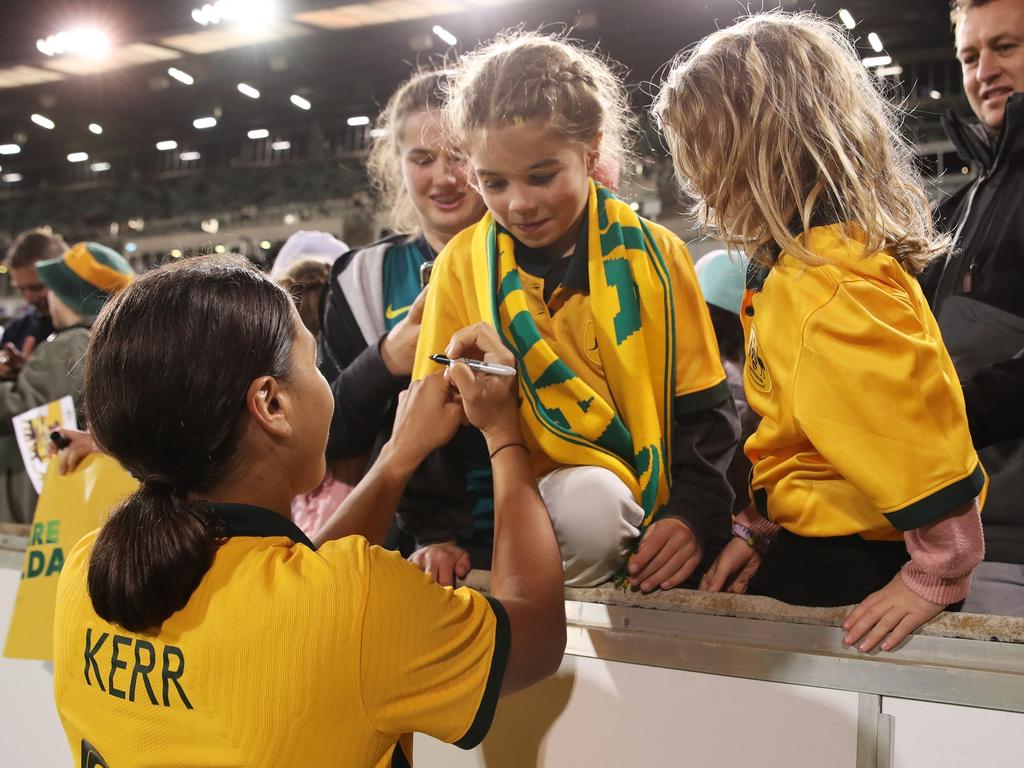 Director of Global Football Network Manchester UK, John Pladas said Michaela was outstanding* over the two days the footballers showcased themselves in Sydney.

“Michaela took in all the information provided by our EPL scouts Andy and Luke and although she was one of the youngest trialists*, her maturity, attitude and ability certainly stood out,” he said.

“I am looking forward to having Michaela over in Manchester in January working with our coaches, playing many games against some of the best players and experience what pro-players experience during her stay.

“Her selection for the scholarship is well earned and deserved.” Sprint coach and Australian Olympian Hayley Butler said she had no doubt that this was just the beginning of an incredible career for Michaela.

“She always gives 100 per cent effort during our speed sessions and at such a young age demonstrates so much talent and determination,” Butler said.

CLASSROOM ACTIVITIES
1. Future Matildas player
Michaela Togias looks to have a bright soccer career in front of her and is about to embark on an amazing opportunity to play overseas.

What are some of the qualities and traits that Michaela must possess to have earned herself this opportunity?

What further opportunities might this overseas trip present to Michaela?

2. Extension
Michaela must train and play hard to have achieved so much at such a young age. What’s a personal goal you’d like to set and achieve for yourself this year? It might be something as little as improving how far or fast you can run, or as big as making a state team or a higher level team at a sport or hobby you are passionate about.

Write your goal below just to remind yourself.

Actions to take to help achieve your goal:

VCOP ACTIVITY
VCOP dodgeball
The normal rules of dodgeball apply. Two teams throw softballs at each other and if you get hit, you have to sit out. The team who knocks out all the players on the other team wins.