High jumpers heal the world – and other Olympic highlights The Tokyo Games was teeming* with Olympic spirit even before the moment that sportsmanship became more important than winning.

In the men’s high jump final, Qatar’s Mutaz Essa Barshim and Italy’s Gianmarco Tamberi made the stunning* decision to share the honour, opting to tie for first place, meaning both men were awarded the coveted gold medal.

Barshim and Tamberi each recorded a best clearance* of 2.37m and – given the choice of a playoff or sharing the title – the two men hugged it out on the track in emotional scenes.

For Barshim, 30, it completes a full house of Olympic medals: bronze in London in 2012 and silver in Rio five years ago, adding to his world title in the event.

Barshim missed a large part of 2018 with a serious ankle injury, bouncing back to win world outdoor gold on home soil in 2019.

“This is a dream I don’t want to wake up from,” he said. “I have been through a lot. It’s been five years that I have been waiting, with injuries and a lot of setbacks.

“But we are here today sharing this moment and all the sacrifices. It’s really worth it now in this moment.” 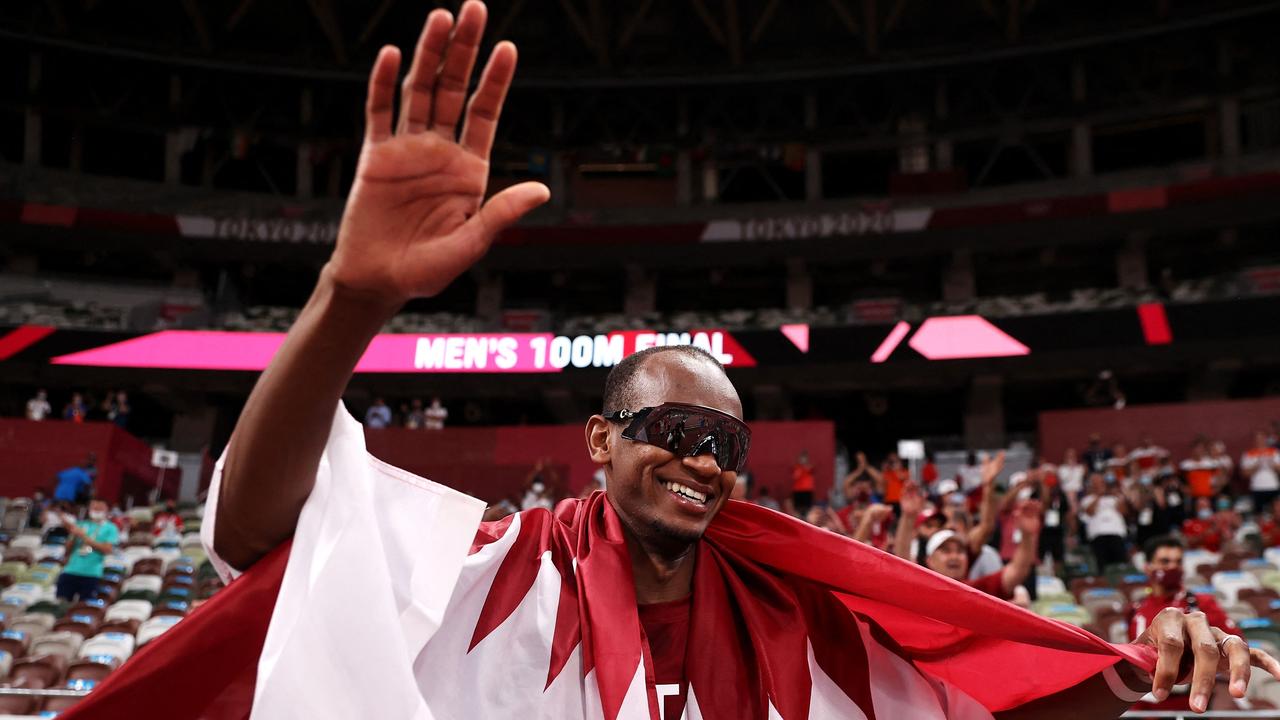 Qatar’s gold medallist Mutaz Essa Barshim celebrates on the track after the unexpected decision between the two leaders to declare their contest a draw. Picture: Cameron Spencer /POOL/AFP.

Italy’s Tamberi added Olympic gold to a world indoor and separate European title, both claimed in 2016. The 29-year-old celebrated with a joyous display of emotion and affection.

His excitement was understandable given he suffered a serious Achilles tendon* injury weeks away from the 2016 Games – the original plaster cast making its own trackside appearance after the final.

“After my injuries I just wanted to come back, but now I have this gold, it’s incredible,” Tamberi said. “I dreamt of this so many times. I was told in 2016, just before Rio, there was a risk I wouldn’t be able to compete any more. It’s been a long journey.”

Maksim Nedasekau of Belarus also cleared the same height to set a national record, but with an earlier miss walked away with the bronze.

Australia’s Brandon Starc cleared 2.35m, just 1cm shy of his personal best height and shared national record, and the best height recorded by an Australian at an Olympic Games. Good one, Brandon! Joint gold medallist Italy’s Gianmarco Tamberi celebrates on the track with the plaster cast souvenir of the injury that dashed his hopes at the 2016 Rio Games. Picture: Cameron Spencer/POOL/AFP.

SO … WHAT JUST HAPPENED?

A jump-off can occur when there is a tie, as happened Sunday night. It results in the bar being lowered to the previous height both jumpers cleared. Each athlete gets one jump, and the bar is alternately lowered and raised to a different height each time until the first person fails to clear the bar.

But most people watching would not have known that in such a deadlock*, declaring a draw and sharing the gold is also an option – even the commentators were surprised.

“That is extraordinary that at the Olympic level it would come down to asking the athletes about the options they have,” Australian basketball legend Andrew Gaze said on Channel 7. “I can’t imagine how anyone would choose the alternative (of a jump off).”

Barshim and Tamberi warmly embraced as they sealed the deal that makes them joint Olympic champions. THE BOLT IS ON FOR AUSSIE PETER BOL

“He did everything right and … takes the Oceania record and runs his way into the final of the 800m,” said McAvaney, speaking on Channel 7 after Bol’s semi-final win.

“He can win the gold medal, that’s what he could do. He is in the mix.”

By qualifying for the men’s 800m Olympic final, Bol has become the first Australian to do so since Ralph Doubell, who won gold at the 1968 games.

Bol’s path to the Olympics is incredible. The 27-year-old was born in Sudan before his family fled the violence of the Sudanese civil war.

They spent four years living in a refugee camp in Egypt before moving to Australia when Bol was eight. He only turned his hand – or more accurately his feet – to running at the age of 16 while living in Perth.

Bol will go into Wednesday night’s 800m final as the “on form” runner of the field after beating the Australian record in consecutive races. After taking the record from his training partner Joseph Deng in Saturday’s heats, the 27-year-old went faster again, clocking 1min 44.11sec to win his semi. Peter Bol reacts just like everyone watching at home in Ausrtalia after he won his semi and secured an Aussie starter in the men’s 800m final for the first time in 53 years. Picture: Matthias Hangst/Getty Images.

The excitement reached its peak Sunday night with a gripping 100m men’s final. With no obvious favourite waiting for the starter gun, the gold medal was won in a Ferrari-like flash by Lamont Marcell Jacobs in a huge night for Italy. The blue ribbon event went ahead without Australian sprinter Rohan Browning, whose blistering 10.01sec time in his qualifying heat made him an overnight hero back home.

Browning’s slow start in the semi saw him eliminated, although he posted a time of 10.09sec and finished a very respectable fifth.

The 23-year-old Sydney University law student was disappointed he was unable to replicate his 10.01sec time from the previous night.

“I had a better run in me than 10.09sec, but I gave the field too much ground early on and you can’t do that in the semi-final of the Olympics,” Browning said.

“It is tough. I just never got out and then I had my work cut out for me. I feel like I came back well through the end of the race but I left myself with too much work to do and it is only 100m.

“Ultimately I have learnt a lot from this, that is the main thing.” Rohan Browning’s face and hair became famous overnight back home in Australia when he won his qualifying heat. Browning finished fifth in his first Olympic semi – and he is not the only one who believes this is only the beginning. Picture: Matthias Hangst/Getty Images.

Ash Barty and mixed doubles partner John Peers were all set for their bronze medal decider when word arrived that Serbian champion Novak Djokovic – who like Barty came into the Tokyo Games hot on the heels of his Wimbledon win – had withdrawn from the match.

At first the Aussies thought it was a joke.

But citing a shoulder injury and in no laughing mood, Djokovic had indeed pulled out, denying his partner Nina Stojanovic her chance at glory and the Aussie pairing a final match that was sure to be memorable.

It is hard to imagine Barty and Peers would have chosen to win bronze this way, but win bronze they did – and without throwing a single racquet. CLASSROOM ACTIVITIES
1. Olympic Moments
We have already seen many memorable and exciting events at the Tokyo Olympics. Choose your three favourite moments, from the Kids News article or other ones you’ve seen or read about, and come up with a catchy headline for a newspaper or magazine article. Your headline should give the reader an idea of what the story is about but also grab the reader’s attention in a few short words.

2. Extension
Who is the fastest 100m sprinter in your class? Organise some timed sprints by using a trundle wheel and some cones to measure 100m distance. Get a stopwatch and time each other to run. See who gets the closest to the fastest man in the world at 9.80 seconds!

VCOP ACTIVITY
1. Athlete Profile
It’s time to shine a spotlight on our Olympic athletes. Create a template for a character profile that you can fill in with all the information you want to know about some of our athletes. Make sure the layout has subtitles, and perhaps questions under each subtitle, to help you fill it in.

2. Extension
Let’s test your layout. Can you use the character profile layout and fill it in with information about yourself? Check to see if you included enough categories. Will we learn a lot about you, or do you need to add more sections? Share your fact file with your class, so they can learn more about you.