The car (nicknamed the Batmobile) that featured in the halftime entertainment of the 1991 Grand Final, seen here in front of the MCG before the 2015 AFL Grand Final with former players Dermott Brereton and Jonathan Simpkin. Picture: David Caird.

2020 lived up to its title again as a year like no other when the AFL announced the Grand Final would be played at the Gabba in Queensland.

We knew it was coming but the reality that the MCG would have tumbleweeds* rolling across it on football’s biggest day hit Victorians hard. Another kick in the guts for the state. Queensland Premier Annastacia Palaszczuk couldn’t wipe the smile off her face, having snared* one of the biggest sporting events in the country just as she was heading to an election.

There were so many ways to approach a cartoon on this, making it challenging to work out which point to focus on.

It was the first time the Grand Final was being played outside of Victoria. The MCG has held the event for over a hundred years, only missing out during World War II and in 1991 when the Great Southern Grandstand was being built.

Queensland has two AFL teams, the Gold Coast Suns and the Brisbane Lions (who famously won three Premierships in a row from 2001-03) but it is essentially a Rugby League state. Poor old Victorian Premier Dan Andrews, under pressure due to the coronavirus second wave and the Melbourne shutdown under stage 4 restrictions had now lost the Grand Final to another state! He was having a tough run.

What did I do? Naturally I ignored all those points and went for something different! Sure, all those facts were swirling around in my head, but sometimes you want to do something that is unexpected. Surprise the readers!

I started thinking about the long road to Queensland that the Premiership Cup would have to take as it made its way north to the Sunshine State. Normally, there is the Grand Final parade in Melbourne on the day before the game, where players and the Cup parade through Melbourne’s CBD streets to huge cheering crowds.

That would be a long parade up the Hume and Pacific highways from Melbourne to Brisbane, especially sitting in the back of a ute holding the Premiership Cup! But that brainstorming moment brought up images of the scene at the Queensland border as the Cup arrived. There has been a lot of heated debate about state border closures and the difficulties faced by people and businesses who need to cross state lines for work and school. Just another disruption to our daily life by COVID-19.

So I thought I might picture the momentous* moment the AFL Premiership Cup arrives at the Qld border security checkpoint with the Queensland Premier and police waiting. But how would the Cup arrive? 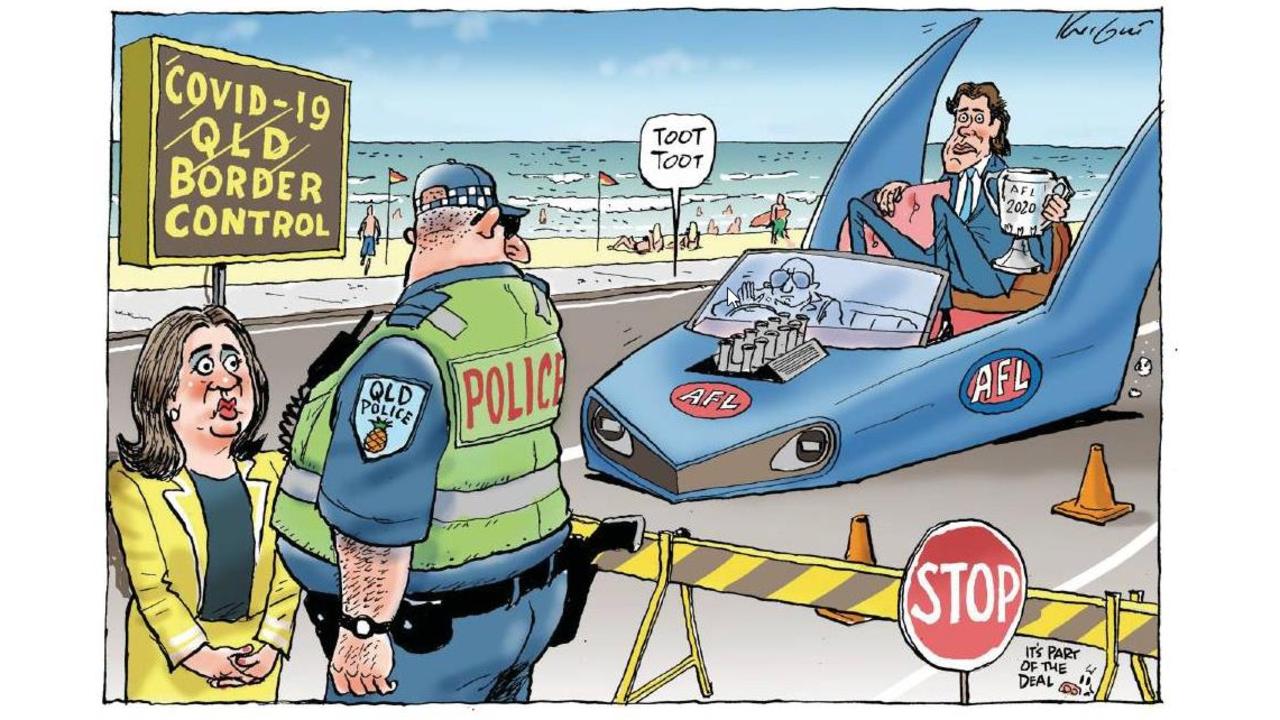 As I mentioned earlier the last time the Grand Final was not played at the MCG was in 1991 at Waverley Park, and during the pre-game entertainment something appeared that would go into footy legend. At that time Australia was in economic recession*, just as it is now, so money was tight. Obviously not wanting to spend too much money on a big show before the game, but still get some bang for their buck, to the stirring sounds of Angry Anderson* singing “Bound for Glory” the AFL had the Premiership Cup arrive onto the ground in the back of a blue Batmobile*.

Yes, that’s right, it wasn’t even black. It looked like it was made by a year 7 art class out of papier mache.

Some looked in disbelief, others laughed out loud, (yes LOL was created that day) at the vehicle that was charged with delivering football’s equivalent of the Holy Grail. It was so bad … it was good, mainly for those of us with a distorted sense of humour! Students I urge you to visit YouTube and take a look at it yourselves.

So I decided to resurrect* the blue Batmobile, my belief that it is a proper and fitting way for the Premiership Cup to arrive in Queensland for this history-making Grand Final in Brisbane. The Cup is held by AFL boss Gillon McLachlan as he arrives at the border with a toot of the horn to a bemused* Qld cop and a Premier who might be wondering “what the heck am I getting myself into here?”

‘To be a great cartoonist, being able to draw is only one of the skills that you need.’ Write a list of all of the other skills that you think cartoonists like Mark need to do their job. Next to each skill, write a sentence that explains why that skill is important or helps them to do a great job.

HAVE YOUR SAY: How would you draw the AFL Cup going to Qld?
No one-word answers. Use full sentences to explain your thinking. No comments will be published until approved by editors.