The Matildas react after being knocked out of the World Cup. Picture: Getty Images

The Matildas’ World Cup dream is over after a nailbiting* and heartbreaking penalty shootout* loss to Norway on Sunday.

The Aussies finished the match and the extra time period equal with Norway at 1-1 but lost the penalty shootout 4-1 in their knockout round of 16 match.

But things started to go wrong for the Matildas when Alanna Kennedy was sent off with a red card in the 104th minute. The only Aussie to be successful from the penalty spot was Steph Catley.

“The girls have already gotten around me. I feel like I let the team down but they’ve been quick to cut that out,” Kerr said after missing her penalty shot.

“It’s been a roller coaster ride the last few months but I’m proud of these girls.” 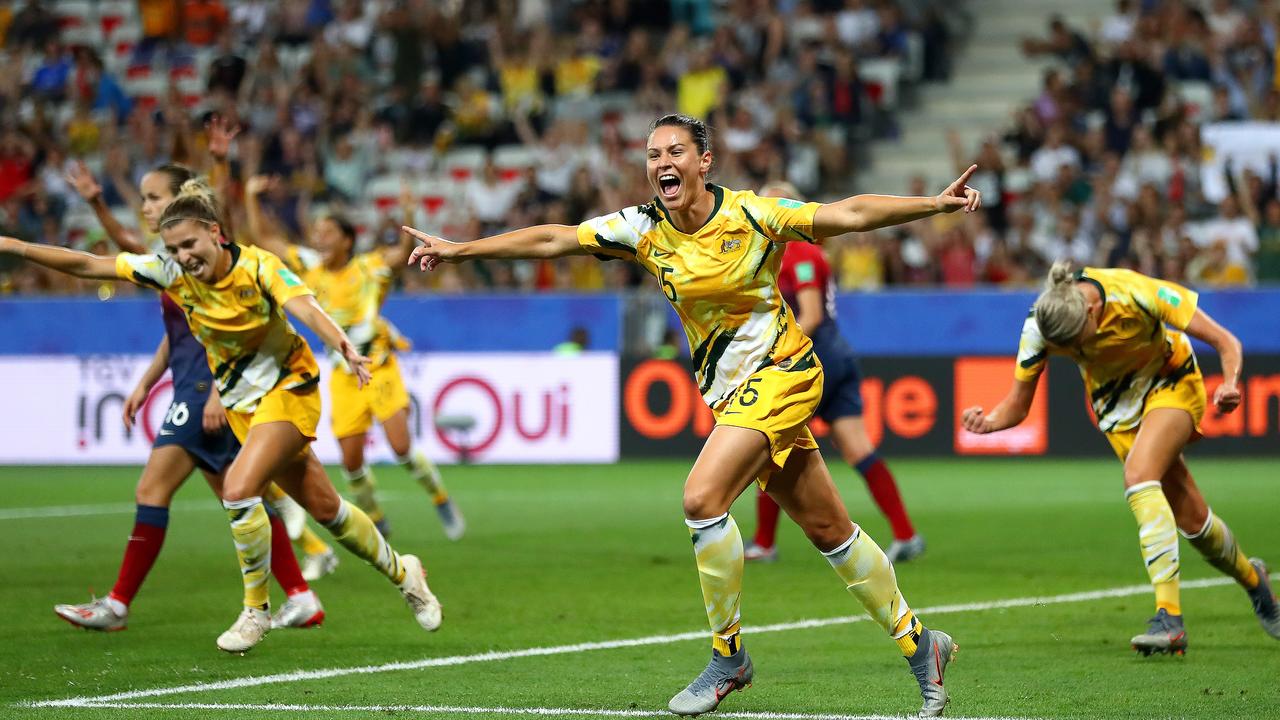 The Matildas’ campaign will live long in the memory for the wrong reasons. Long-term coach Alen Stajcic was sacked five months before the tournament after players were stressed and afraid to speak up about how they were playing.

Ante Milicic was appointed in February and brought a new energy, but the team lost lead-in friendly matches to the US and Netherlands.

With long-term Matildas Kyah Simon and Laura Alleway on the sidelines, and Clare Polkinghorne and Elise Kellond-Knight suffering injuries through the tournament, Milicic had serious player issues. “I don’t know if there are any words to describe how I’m feeling,” Milicic said after the loss.

The Matildas’ performance under Milicic was the first time they have failed to reach the last eight at a World Cup since 2003.

“It’s too emotional and there’s too much disappointment in me right now to come up with words,” he said.

“What I will say is I am extremely proud of them and it’s been an honour to work with this group.

“They’re a special bunch of girls and have grown so close to me, and I am disappointed I couldn’t help them realise a dream they’ve been waiting for a long time.”

Matildas knocked out of World Cup by Norway

Caitlin Foord said the Matildas would lick their wounds* and set their sights on the 2020 Olympics in Tokyo.

“It’s going to take some time for it to sink in,” she said.

“This is what we were here to win and that’s finished, so it will take some time but we’ll regroup* when we need to and look forward to Olympics.”

CLASSROOM ACTIVITY
1. Confidence boosters
Despite their nailbiting and disappointing exit from the World Cup, key players and the Matildas coach still used positive language about the team’s performance and playing future. List all the positive words and phrases you can find in the story.

VCOP ACTIVITY
With a partner, see if you can identify all the doing verbs/doing words in this text. Highlight them in yellow then make a list of them down your page. Now see if you and your partner can come up with a synonym for the chosen verb. Make sure it still makes sense in the context it was taken from.

HAVE YOUR SAY: Tell the Matildas why Australians are still proud of their World Cup performance.
No one-word answers. Use full sentences to explain your thinking. No comments will show until approved by editors.