Australia’s most underrated* sportsperson is underrated no more.

Minjee Lee’s spectacular win in the US Open – her second major* – should ensure her recognition in Australia surges* to a level appropriate for her exceptional* performances.

But it hasn’t always been this way.

Only a few years ago, when she was in the world top 10, she did not even have an Australian sponsor.

Yet her zest* for her country of birth is such that she represented Australia in two Olympics with a passion not shared by some other golfers.

And she was wearing an earring with a map of Australia as she celebrated her June 5 US Open win, her greatest tournament triumph so far. Her four-shot victory also earned her $2.5 million in prize money, the biggest single payday in women’s golf history. 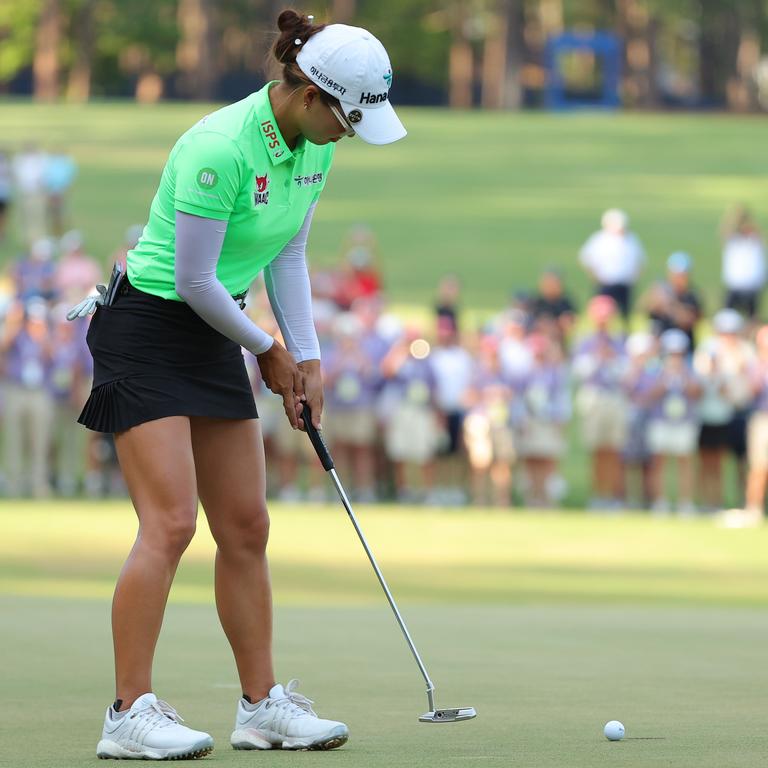 Minjee Lee putts on the 18th green during the final round of the US Women’s Open at Pine Needles Lodge and Golf Club. Picture: Getty Images/AFP

Minjee Lee’s success comes from tireless dedication. Her swing has been voted the best on tour by peers* and it looks so fluent* and easy you wonder how she ever misses a fairway*.

But nothing has been left to chance. She has squeezed everything out of her ability through relentless* hard work and constant refinement*. Lee, 26, is the daughter of Soonam and Clara Lee who moved to Perth from South Korea more than two decades ago and raised Minjee and her brother, Min Woo, who is also an exceptional golfer.

As great a star as she is in her own right, Minjee recently took on caddie* duties when her brother played a tournament at America’s famous Augusta golf course.

Behind the brother-sister banter* lies the occasional insight*. Min Woo once said when things get really tough in training he might stop “but she just keeps going.’’ Lee always had something special about her. She won a Western Australian title at age 10, the US junior championship nine years ago and was just 17 when ranked No.1 amateur* in the world.

It’s seven years since she was ranked the Ladies Professional Golf Association’s rookie* of the year and she has been floating in and around the world top 10 for five years.

Her mother was a teaching professional at a driving range* in Perth and her father was also a very good golfer. The family now runs a cafe in Perth.

While Minjee did many of the fun things that youngsters do at school – singing in choirs and taking dancing lessons – there was never any doubt that golf would be her future.

In Year 11 she even moved schools to be closer to her home golf course in Fremantle.

Much like recently retired Australian tennis star Ash Barty, Lee has had the benefit of a wise coach (Ritchie Smith) and a close, supportive family.

They have climbed the mountain together and there’s plenty of glory days ahead.

Barty: I want to inspire kids to chase their dreams

CLASSROOM ACTIVITIES
1. Champion Minjee Lee
Had you heard of Minjee Lee before reading this article?

She has had an amazing career since a young age, but at 26 is just coming into the limelight. Why do you think this is so?

What do you think Minjee Lee might do with the $2.5 million prize money?

Do you think she will get more sponsorship from Australian companies now that she’s had some big success?

What type of skills do you think Minjee Lee possesses to be such a successful golfer?

2. Extension
What do you think lies ahead for Minjee Lee and her family?

How would you like to see her celebrated as an amazing Australian sportswoman?

VCOP ACTIVITY
Vocabulary recycle
Minjee Lee is described as having “tireless dedication”. What  does this mean?

See if you can re-use it in a sentence to describe something you have done that was hard work, but you didn’t give up on?