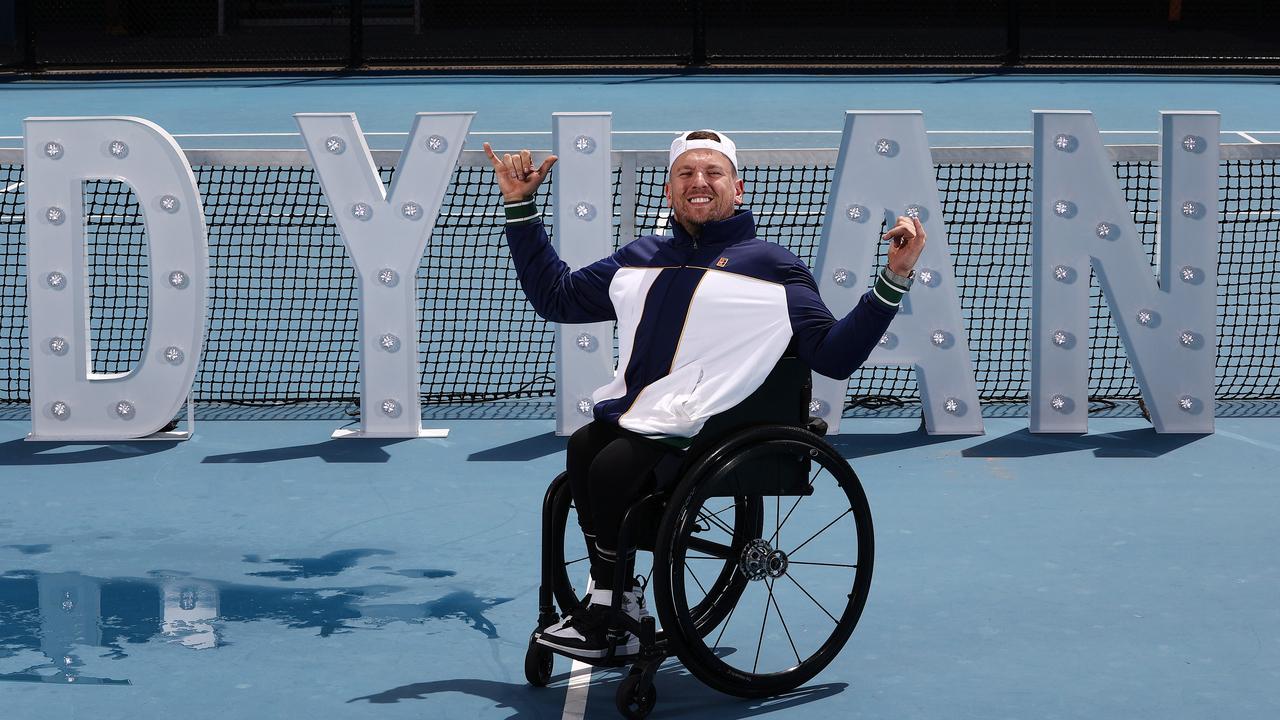 Australian quad tennis superstar Dylan Alcott announced Tuesday from the court of his “second home” Melbourne Park that the 2022 Australian Open will be his last tournament before he retires from the sport. Picture: Michael Klein

Announcing his retirement from the sport that made him a household name, Australian champion Dylan Alcott quickly slipped back to the moment tennis changed his life.

The greatest quad wheelchair tennis player of all time was at his second home, Melbourne Park, to announce that January’s Australian Open would be his last.

Alcott recalled how he hated himself as a kid, was bullied because of his disability but everything changed when he attended the Thurgoona Open tennis tournament, near Albury, as an 11-year-old.

“That social part of tennis changed my life immediately. I realised I could have a life, it gave me a purpose, it introduced me to people who were like me. Mate, geez I’m glad I did that.”

And now Alcott smiles when he sees television ads promoting the sport and he‘s right there alongside Ash Barty and Rafael Nadal. 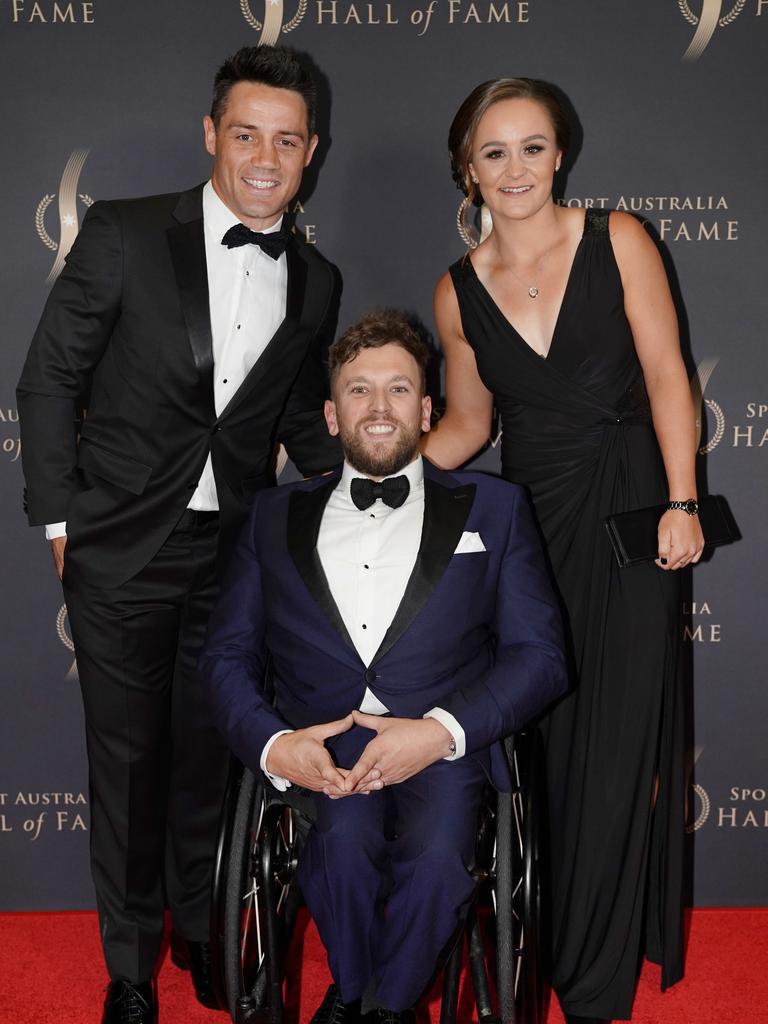 “It’s incredible what we have all been able to achieve,” he said.

”To watch those TV ads, it just feels normal now and this place has set the tone for it all.

“I’m super proud – and probably more proud of the work we’ve done off the court, to be honest. Being a good tennis player is probably the 32nd priority of my life and I mean that.

“Being a good person is No. 1, a good family member, a good friend, a good partner to my partner Chantelle, and being a good advocate* for my community to change perceptions* for people like me so they can live the lives they deserve to live and get the opportunities that I’ve had. I’m so lucky.

“It’s not me, it’s we — we’ve all done this, my team, my family, some are here today, my doubles partner Heath, everybody that’s a part of what we do. It’s a big juggernaut* but it’s really changed perceptions, I hope.”

Alcott is chasing his 16th grand slam singles title in January and his eighth straight Australian Open crown. He already has 23 grand slam titles to his name, 15 singles and eight doubles.

He is coming off the best season of his career as the first male ever in any form of tennis to reach the holy grail* of a calendar year Golden Slam. To reach the pinnacle* that has eluded* so many tennis greats, Alcott won gold at the Tokyo Paralympics as well as all four grand slam quad wheelchair singles titles. 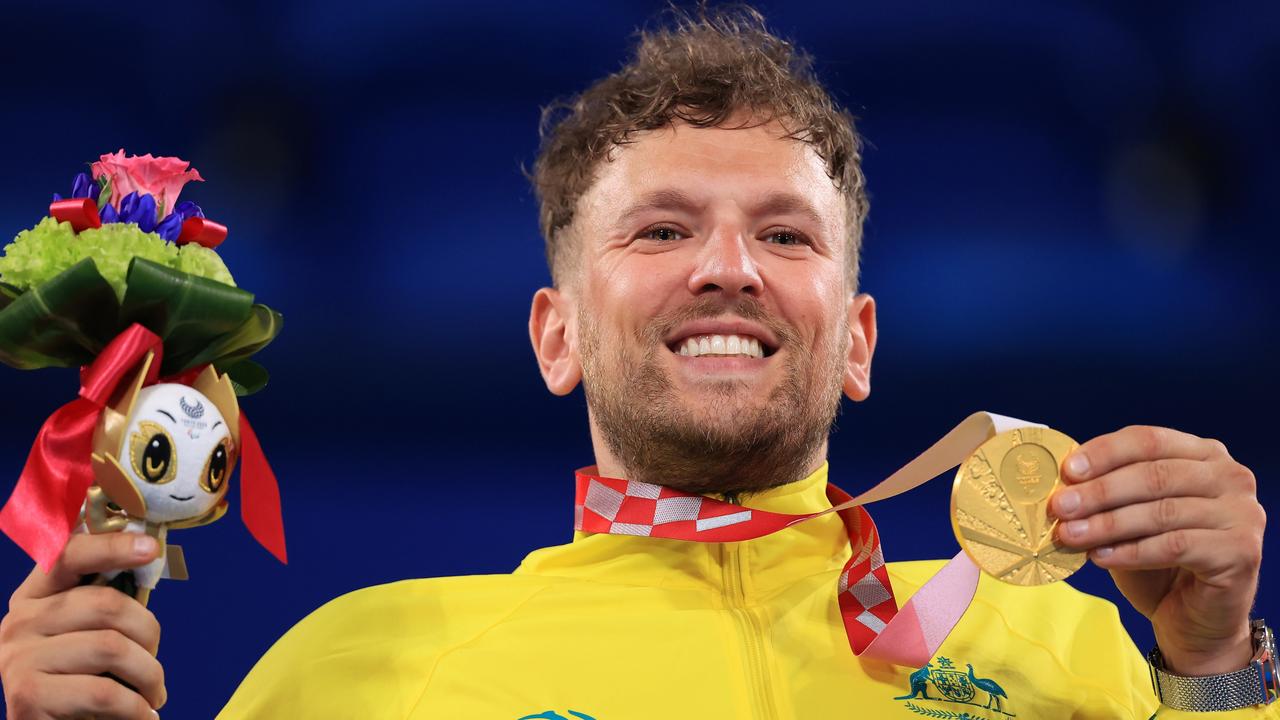 A gold medallist at the Tokyo Paralympics, Alcott is the only male player in any form of tennis to reach the holy grail of a calendar year Golden Slam. He is the most successful quad tennis player of all time. Picture: Getty Images

The 30-year-old is a four-time Paralympic gold medallist, one of those coming in basketball in Beijing in 2008.

His expanding business and media career helped accelerate* the decision to hang up the racquet, with Alcott also hinting at an acting career.

“I work in the media, I have a consultancy company which educates people about disability, a food company, a foundation, I want to do some acting, I’m writing a script,” he said.

“I have heaps of ideas, there are lots of things I want to do. I’m spinning all these plates at the moment and it’s hard to do.

“I think I have done everything that I need to do here, I don’t want to be that old guy who is hanging on getting beaten.

“So the time has come to move on to other things, but in saying that I’m going to … try and go out on a high.” CLASSROOM ACTIVITIES
1. Nominate Dylan
Every year, nominations are open to help the Australia Day Council choose the Australian of the Year. People can write a letter describing the achievements of a person they think should win this award. They also explain why their nominee deserves this honour over all of the other amazing Aussies who could be nominated. Write a letter that would convince the Australia Day Council to make Dylan Alcott the next Australian of the Year.

2. Extension
“So the time has come to move on to other things.” Use this statement as your inspiration for a story or artwork.

VCOP ACTIVITY
A moment that changed my life

Dylan Alcott said that the tennis tournament he attended when he was 11 years old changed everything. He witnessed how people with disabilities were being held back from enjoying life and living out their dreams.

Have you had a moment in your life that was a real eye-opener? Maybe you learnt a new skill, maybe you discovered a new passion or mentor, maybe you made new friends, or maybe you left behind the negative thing/s in your life.

What was the moment that really made a difference in your life? How did it make you feel? Was it a big shift or just a small change? What happened because of it? If you feel conformable, share your moment with a friend or family member.