The new Last Push to Play On advertisement shows Launceston’s Lily Champ, 10, running with a football through some of Tasmania’s most iconic places. Picture: Nikki Davis-Jones

The young star of an emotive* new television advertisement pushing for a Tasmanian team in the AFL said she can’t wait to play for the state in the AFLW.

Lily Champ, 10, said she was excited to be chosen to be part of the final campaign, The Last Push To Play On, ahead of the decision in August on whether Tasmania will become the AFL’s 19th club.

“It would mean a lot to me and the other generations like me, because it means you don’t have to move to Melbourne to play your dream sports.

“I’d love to share playing with all my friends and my grandparents and parents and show them I can do a lot.” 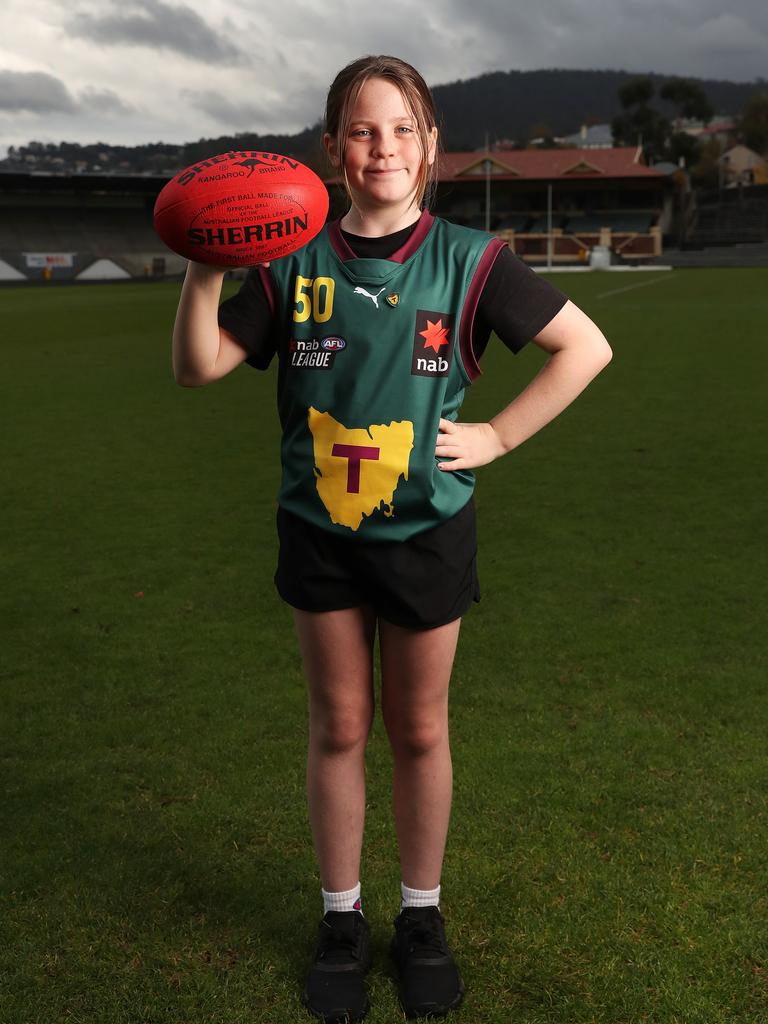 Tasmania is pushing for its own AFL side with the help of an advertisement starring Lily Champ, 10, who plays for North Launceston and dreams of one day playing in the AFLW. Picture: Nikki Davis-Jones

Lily, who plays for North Launceston and supports Richmond in the AFL, said she loved tackling the most and her favourite player was Richmond’s Dustin Martin.

The Last Push To Play On ad shows Lily running with a football across the state’s many iconic* places, supported by past and present Tasmanian football greats and members of the community.

Richmond star forward Jack Riewoldt is one of the featured players.

“It is a very small part, but I’m very, very proud of it as well,” Riewoldt said. “Go down, spend a week, have some fun and see what it is like to live in Tasmania and any team that wears the map … will wear it with pride.”

A Believe Tasmanian website has also been set up as the campaign seeks thousands of signatories* to register their support as future members, in a final message to the AFL executive, commission and the other club presidents that now is the time. But AFL Taskforce Tasmania chair Brett Godfrey said it was much more than just about the end of the campaign.

“We see the degradation* that has happened, we see the lack of aspiration* of football in the state, we see the steering committee work that was announced in 2018 hasn’t been delivered by the AFL, we’ve seen all those things,” Mr Godfrey said. “We’ve seen basketball on the rise so it is truism* — people have to believe it for all these reasons that it is only getting harder and this is the opportunity to seize.” Jack Riewoldt of the Tigers also appears in The Last Push to Play on advertisement. Picture: Daniel Pockett/Getty Images

Mr Godfrey said the ad would not only tug at the heartstrings of Tasmanians but all Australians.

“Everyone can see part of their own growing up in that video, that they camped at this place, or played cricket or footy on that ground or bought a coffee in that street – and that’s across Australia,” Mr Godfrey said.

“What we showed was a reflection of our country in one state and everyone who sees that will be able to see something out of their childhood and we all know how important those memories are.”

But he said it was important followers locally and interstate “add their name and change the game” on the BelieveTasmanian.com.au website, which also features podcasts with prominent* Tasmanian football identities, such as North Melbourne coach David Noble, Richmond CEO Brendon Gale and legendary media commentator Tim Lane. 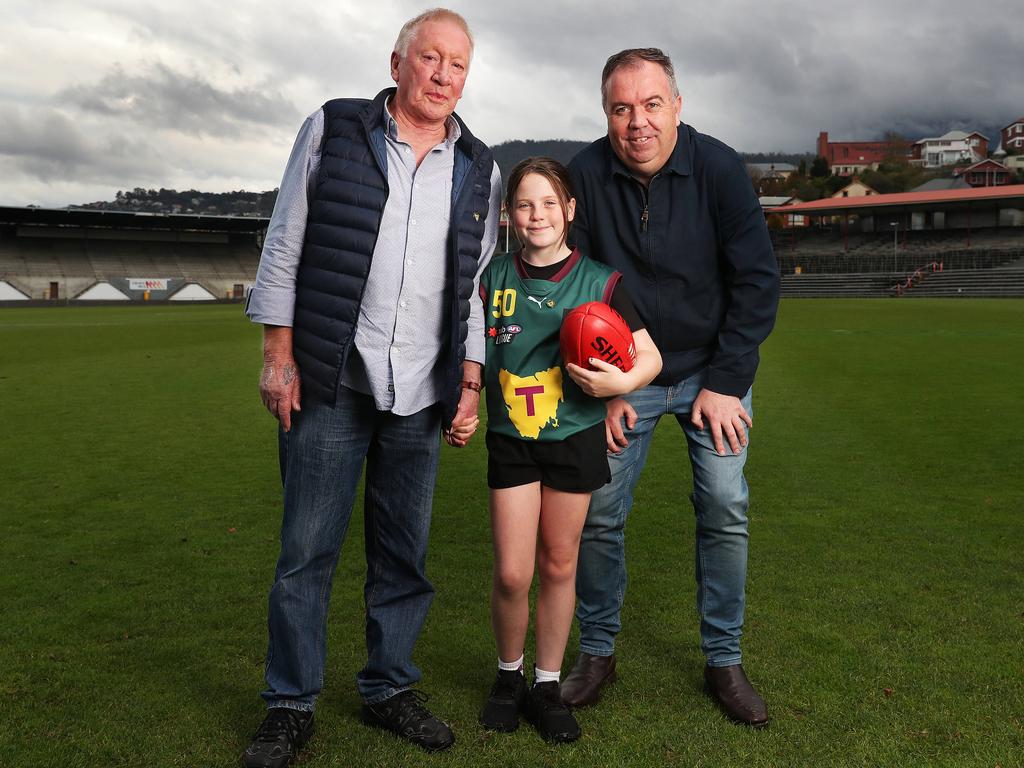 David Champ pictured with granddaughter Lily Champ, 10, and Sports Minister Nic Street, who said the success of the Jack Jumpers basketball team had demonstrated what a Tasmanian side could achieve. Picture: Nikki Davis-Jones

“This is about putting your name down, a pledge to support, but this is to be totally kept informed from here on in on the growth and implementation* of your new footy club,” Mr Godfrey said. “This is like a future members’ portal*.”

“We’ve got a heartland* in Tasmania that’s not featuring in our national game … It’s just wrong, and we’ve got to do something about it,” said Clarkson.

“If you’re keen about seeing a Tassie team, get your name on the books.”

Sport Minister Nic Street said Tasmanians had thrown their support behind the Jack Jumpers basketball team, which proved what a Tasmanian team in a national competition could do.

“They want exactly the same thing for other winter sports, particularly AFL football,” he said.

Microchipped footies to keep AFL on the ball

Footy’s best and fairest sealed with ‘a shoey’

CLASSROOM ACTIVITIES
1. AFL in Tasmania
It seems only fair that Tasmania should have a team in the AFL and they are working hard on getting the support and backing for this change to happen.

Design a guernsey and logo for a Tasmanian team and give the Tassie team a name that they could use if their dream becomes a reality.

Sketch your guernsey and present your name to the class.

2. Extension
Why do you think it has taken so long for a Tasmanian team to enter the AFL?

What could be preventing this move?

What would this extra team add to the current AFL structure?